Outsell has conducted independent research with CMOs and other key marketing decision-makers on their use of earned media and how earned media plays into paid, owned, and earned aspects of marketing.

Paid media, such as banner and TV ads, is primarily delivered by media companies. Owned media includes companies’ own websites and other direct-to-customer activities. Earned media is what others say about a firm’s products and services, and earned media marketing services help companies amplify their reach and effectiveness.

In Outsell’s opinion, the rise of earned media is eroding the growth of paid media.

Outsell’s 11 years of advertising and marketing research involving 13,000 US advertisers draws on analysis of 5 million data points, including marketers’ spending on 36 marketing methods across all media types. These findings, including Outsell’s 2016 survey of 1,501 marketers, capture marketers’ ratings of the effectiveness of the methods they use and ranking of the problems and gaps they face. It addresses marketers’ use of paid, owned, and earned media. In addition, it quotes interviews Outsell conducted with marketing executives in the United States and Canada to provide an additional window into how marketers are changing and how they use and judge earned media.

Advertisers’ Attitudes and Actions Toward Paid Media Have Changed

Key findings from Outsell research on how earned media has contributed to the erosion of the role, and the purchase of paid media, include these headlines:

A critical pattern emerges in lead generation. Most of the top methods rated most effective by both B2B and B2C senior marketers — those in or near the darker gray “power square” in the upper right, are user opt-in (pull) methods, not push marketing methods. They are opt-in since customers and prospects choose to participate in these methods: visiting companies’ websites, attending companies’ own events, engaging in social, and going to conferences and exhibitions. They are not snared, tricked, or intercepted while they are trying to do something else. That is, they are not subject to the intrusive tactics of push marketing.

It is also interesting to note that public relations (a pull marketing tactic) is rated more effective by both B2B and B2C marketers for lead generation than push tactics such as print, TV and radio, as well as mobile and native advertising. 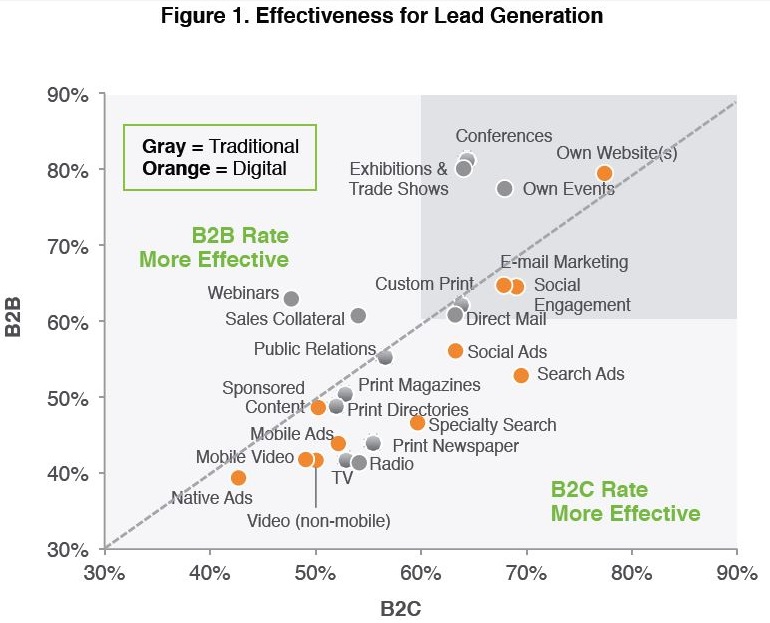 In terms of effectiveness for building brand awareness, once again pull marketing tactics were rated as the most effective by B2B and B2C marketers – with 4 out of the top 5 highest-rated tactics being pull methods. B2B marketers favored their own website(s), conferences, own events, exhibitions, and email marketing, while consumer-facing marketers rated their own website(s), social engagement, social ads, exhibitions and own events as the top tactics. The two groups of marketers found public relations equally effective, ranking it No. 7 out of 24 tactics. 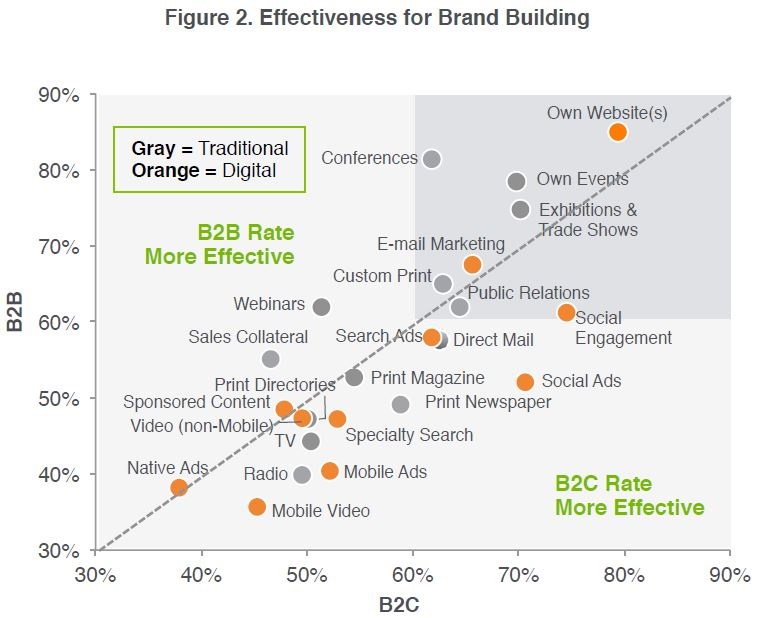 Comparisons between brand building and lead generation illustrate that there are commonalities across tactics regarded as more effective and less effective. Both B2B and B2C marketers find pull tactics most effective, while they also find agreement on the less effective push tactics. The push tactics deemed less effective include a mix of traditional methods (print, TV, and radio) and digital (mobile ads, mobile video, sponsored content), with native ads ranking lowest by both groups for lead generation and brand building.

Outsell has also mapped the range of user trust levels to emphasize customers’ preferences for and deeper engagement with opt-in, or pull marketing methods.

In the diagrams of marketing methods in Figure 3, user trust is at the top and user dislike is at the bottom. Going left to right, the most intrusive methods are on the left and the right shows the most user-controlled, or opt-in methods.

In this chart, push marketing methods are in the lower left, while pull marketing and earned media are in the upper right. 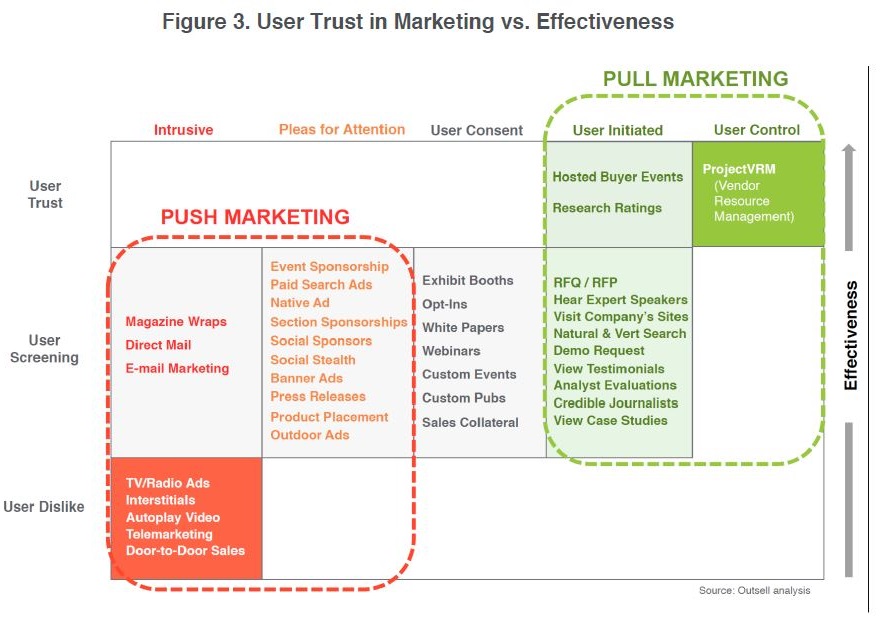 In addition, the chart of year-over-year (YoY) changes in budget for the marketing mix, in Table 1, lists selected high-growth marketing methods. It includes three pull marketing methods in which users opt-in: own social engagement +10%, webinars +8%, and company’s own sites -3%.

In combination, these three charts reveal the fundamental change in marketers’ attitudes and actions that are driving both attention and spending toward earned media methods, such as companies’ own social media, own events, and other methods described later in this report. 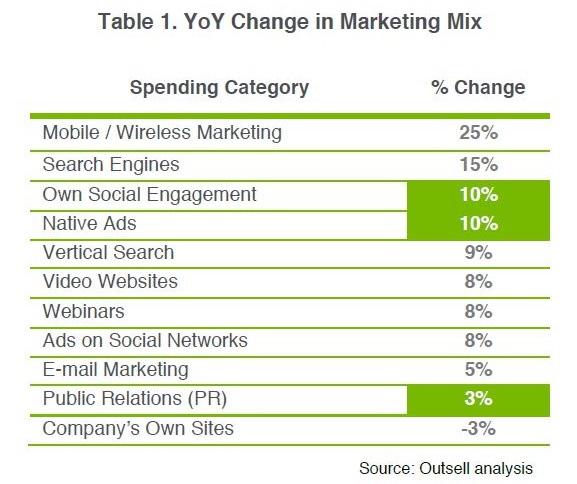 Outsell has answered three questions critical for CMOs who are affected by these shifts and changes and who want to monetize earned media as an element of their marketing programs.

Marketers rate owned media as the most effective of the three types. But earned media is widely rated as more effective or equally effective as paid media. 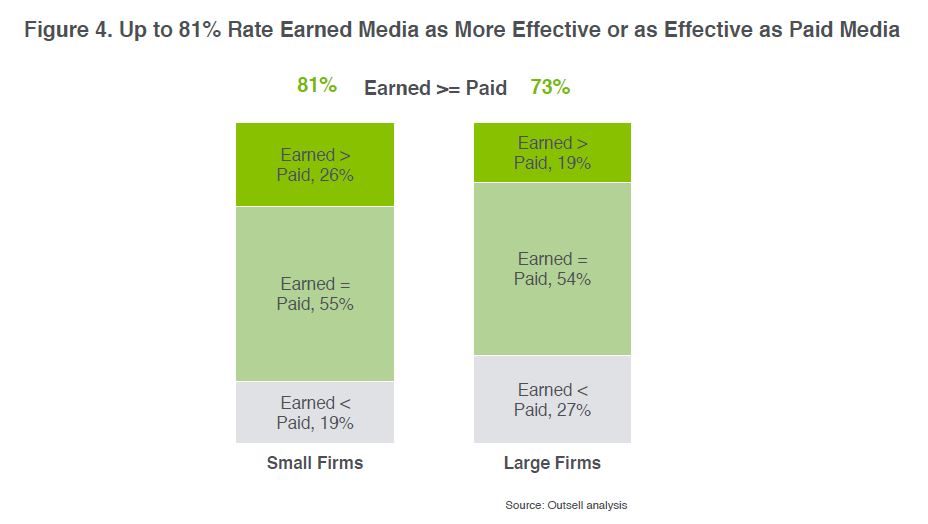 Outsell analyzes marketers’ rating of the problems and gaps that plague them and has found that two items specifically measure the problems that earned media is especially suited to solve.

These key results show that:

In earned media, influencers self-select and have a multiplier effect influencing many others to convert at higher rates than paid media. This makes earned media especially effective in increasing prequalification of prospects and increasing engagement with the right prospects.

“We are shifting from paid to earned. We’re starting to see the needle move with more sharable content, more invitations to speak at conferences vs. paying to speak, more press coverage vs. paid advertorials.”

Question 2: Is Earned Media Widely Used, or on the Bleeding Edge? 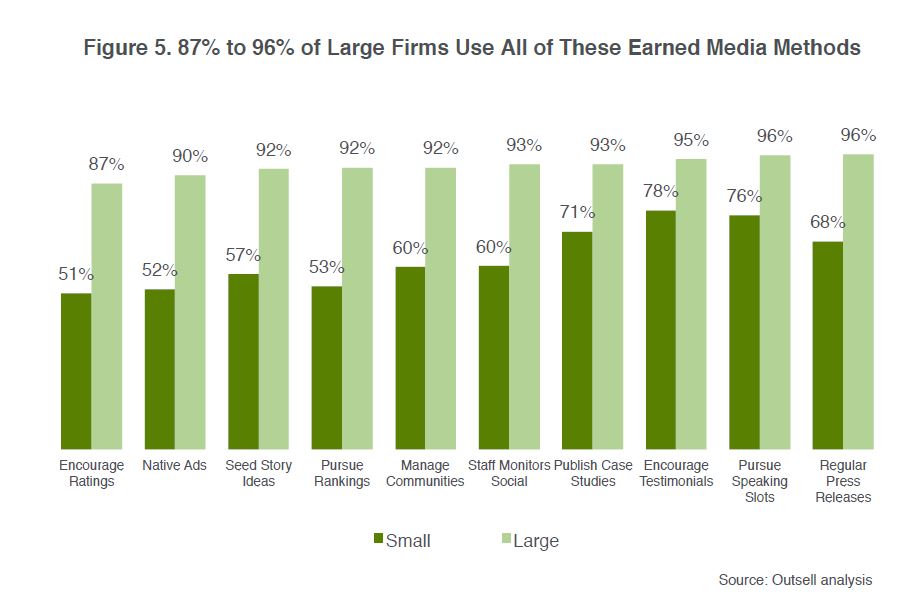 The findings also show that:

“Social is key in earned media. It’s split between: Engagement and Content. Don’t lump these two together.”

“Earned is all the ways you express your thought leadership.”

Hire and Assign Staff to specifically monitor and engage on social media services.

Seed Story Ideas to journalists and industry analysts, including using a PR agency to assist in this.

Encourage or Incent customers to rate your product or service on Yelp, Amazon, or another third-party review service.

Rely On and Encourage Testimonials on your own sites and marketing materials.

Continually Generate Case Studies and Success Stories on your own sites and across multiple platforms.

Overall, large firms gave these methods higher ratings, but the top four listed methods are rated effective by 40% or more of marketers in small firms and by 69% or more in large firms. 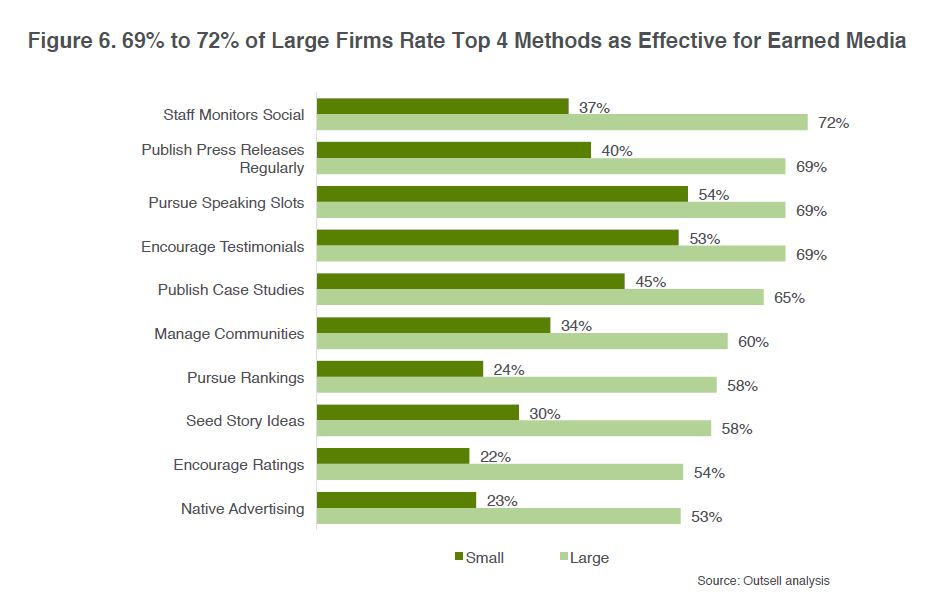 “Earned has the highest value, better ROI. It is more authentic to our audience.”

“We have a big bias toward owned and earned. Paid is not a big piece of our marketing message.”

“We use primarily owned and earned media. Our market is skeptical of paid ads.”

“Earned builds presence and must be in the marketing budget.”

“We are a very small startup company so earned creates additional ‘free’ marketing.”

Earned media is not a fad. It is here to stay because it drives results with a strong ROI. Earned media’s impact can be amplified by engaging with and nurturing relationships with influencers and blending them into the marketing mix appropriate to each situation. Success depends on using analytics with feedback loops to act on market perceptions.

Outsell recommends that marketers optimize their proactive measures to increase the impact of their earned media. Four components are key:

Outsell recommends using these earned media tactics in an integrated way with paid and owned channels to further amplify the impact. Earned media exposure can then be scaled by using paid and owned placements, which creates a cycle that builds results.

“We identify the Top 20 Influencers and build an Influencers Map. If they become enamored of us, they influence many others.”

“Gate Keepers and Influencers are more important than ads. It’s the Halo Effect.”

“Analytics are key. Use social tracking for: Share of Voice; Sentiment; Alignment with Brand.”

“In crisis management, things escalate so quickly!! Monitor continually to know when you are exposed. Earned media is key to getting ahead of it. Just encouraging Likes and Followers is not protection.”

PR Newswire has licensed this report from Outsell, Inc. with the right to distribute it for marketing and market education purposes. PR Newswire did not commission this report as a fee-for-hire white paper nor did it have influence on the outcome of the report. Outsell’s fact-based research, analysis and rankings, and all aspects of our opinion were independently derived. For questions, please contact Outsell at contact_us@outsellinc.com.

The rapid convergence of information, media and technology is reshaping businesses every day. Enter Outsell, Inc., the only research and advisory firm focusing on these three sectors. As the trusted advisor to executives, our analysts turn complexity into clarity, and provide the facts and insights necessary to make the right decisions. Our proven blend of big data, research, proprietary intelligence, and exclusive leadership communities produces tangible results and a strong ROI. We promise to deliver “wow” and ensure clients stay more focused, save time, and grow revenue in a fast-changing digital world.

The information, analysis, and opinions (the “Content”) contained herein are based on the qualitative and quantitative research methods of Outsell, Inc. and its staff’s extensive professional expertise in the industry. Outsell has used its best efforts and judgment in the compilation and presentation of the Content and to ensure to the best of its ability that the Content is accurate as of the date published. However, the industry information covered by this report is subject to rapid change. Outsell makes no representations or warranties, express or implied, concerning or relating to the accuracy of the Content in this report and Outsell assumes no liability related to claims concerning the Content of this report.

For more than 60 years, PR Newswire has helped PR, corporate and marketing communications, and investor relations professionals achieve their communications goals – from building awareness with new audiences and gaining media pickup, to managing reputation and inspiring investor confidence – by sharing, targeting, tracking and enhancing their messages to make the most of their communications campaigns and content investments.