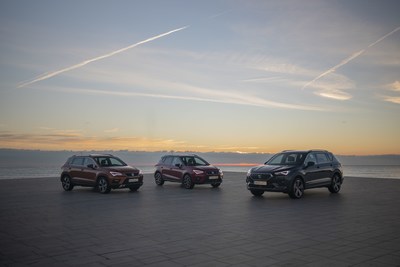 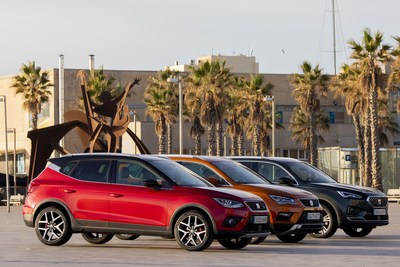 "The new SEAT Ateca plays a key role in our new brand strategy. The Ateca is kick-starting the largest product offensive in the history of SEAT." These were the words of SEAT Executive Committee Chairman Luca de Meo during the launch of SEAT's first SUV in 2016. Two and a half years later his intentions have been fulfilled and SEAT now has three models in its SUV range, all sharing the same DNA but with their own distinct personality. Today they are on the road together for the first time in the city where they were created.

-Design created in Barcelona: this is the deciding factor for 65% of customers who purchase an SUV. In the case of the SEAT models, they all have a common origin - Barcelona. "All three could only have been created in this city," according to SEAT design director Alejandro Mesonero-Romanos. With the elegance, sportiness and love for detail as shared characteristics, each model has its own features. For example, the Arona boasts a "strong crossover character, with 68 possible colour combinations", the Ateca is distinguished by its "elegant silhouette" while the Tarraco "conveys its character thanks to the design of its front end, which points to what future SEAT models will look like."

-Engines to suit all needs: with performance outputs ranging from the 95 hp of the Arona to the 190 hp of the Tarraco, the three SUVs offer a wide variety of engines to guarantee performance, efficiency and reliability. In addition, the Arona is the first model in its segment to offer a Compressed natural Gas (CNG) engine, while the Tarraco will benefit from a Plug-in Hybrid version. SEAT's largest SUV is "a masterpiece in terms of functionality and versatility" assures SEAT Vice-president for R&D Dr. Matthias Rabe.

-Safety, the highest priority: Traffic Jam Assist, Lane Assist, ACC adaptive cruise control, emergency braking function… These are just a few of the state of the art safety assistants that are built into SEAT's SUVs and which show the brand's commitment to prioritising safety and making driving easier. Furthermore, the Tarraco raises the bar even higher by including pedestrian and cyclist recognition systems.

-Connected to the future: for 28% of people who buy a car, connectivity is a primary feature. SEAT is working intensively on offering the best solutions to respond to the growing digitalisation of our surroundings, and the three SUVs demonstrate this. On one hand with the Digital Cockpit and an 8 inch screen; and on the other, with Full Link as a core element. This system links a smartphone to the car via Apple Car Play, Android Auto and Mirror Link to guarantee connectivity in a safe manner.

-Sales success: 30% of buyers currently choose a car that offers an elevated driving position, such as an SUV. In the past five years, sales of this kind of mid-size vehicle have nearly doubled in Europe, and this upward trend is on the rise. Sales are expected to grow by 40% by 2025, reaching a total of 2.8 million units. In the case of SEAT, SUVs have been key in boosting company sales. One out of every three cars sold by the brand is an SUV and these figures will soon be joined by the Tarraco.

SEAT is the only company that designs, develops, manufactures and markets cars in Spain. A member of the Volkswagen Group, the multinational has its headquarters in Martorell (Barcelona), exporting 80% of its vehicles, and is present in over 80 countries on all five continents. In 2018, SEAT sold 517,600 cars, the highest amount in the brand's 68 years of history.

The SEAT Group employs more than 15,000 professionals and has three production centres - Barcelona, El Prat de Llobregat and Martorell, where it manufactures the highly successful Ibiza, Arona and Leon. Additionally, the company produces the Ateca and the Toledo in the Czech Republic, the Tarraco in Germany, the Alhambra in Portugal and the Mii in Slovakia.