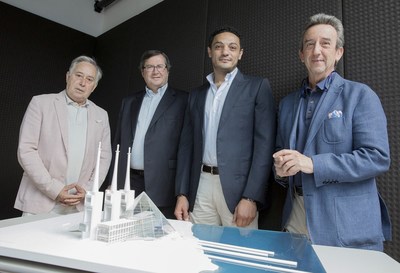 One summer afternoon the Egyptian promoter and actor Mohamed Aly stared at the sea of Barcelona and thought it was the same that was bathing the coasts of his beloved Alexandria. That Mediterranean which saw the birth of so many civilizations and which today is the sad scenario of a great migratory crisis. He had an idea. Why not unite the open and creative city where he lived for 4 years with the great cultural center of the ancient world?

Admirer of the Pharaonic era, which he considers the most splendid moment in the history of his country, the image of a modern pyramid came to mind, which would rise in an emblematic place in Barcelona and would be twinned with the three historic pyramids of Giza built to bury the pharaohs Keops, Kefrén and Micerino. It would be the fourth pyramid in the Mediterranean. "Egypt was one day the university of the world. I thought it was a beautiful way to unite Europe with Africa, to make the two cultures embrace again, turning the pyramid into a great centre of knowledge," says Mohamed Aly.

But where can we locate it? It was also next to the Mare Nostrum where he found the ideal place. There is nothing better than merging the pyramid with the set of the Tres Xemeneies of  Sant Adrià del Besós, the patrimonial remains of the old thermal power station that remained in disuse and still have no defined future. The Egyptian businessman was struck by the great height of the chimneys and their shape, reminiscent of the mythical Lighthouse of Alexandria, one of the 7 wonders of the ancient world. It all worked out for him. The light of knowledge had to twin the shores of the Mediterranean so that it ceased conflicts.

Barcelona, in connection with Alexandria

If the city where Alexander the Great gave his name was the great cultural center of the Hellenistic era, in the 21st century Barcelona could host a transversal space for reflection an innovation that united people of Africa and Europe and allowed for the continuous transfer of ideas. "If there is no knowledge, there is no peace," says Mohamed Aly.

In this way, the Catalan capital could also establish links with present-day Alexandria, which has recovered its iconic library in collaboration with Unesco (in Cleopatra's time it housed one million volumes). The Alexandrian colossus of the Egyptian coast could join hands with the Adrian colossus of the Mediterranean.

Creating the great university of the Mediterranean for peace

The vision of Mohamed Aly, owner of the construction company Amlaak, begins to take shape when he contacts the consultant Rafael Salanova Roma, who directs the proposal, and involves the firm Alonso Balaguer y Arquitectos Asociados, the architect PierPaolo Troiano, the town planner Josep Cuéllar Blanco and the UB former rector Marius Rubiralta, who is responsible for coordinating the experts and providing content to the pharaonic work.

The new colossus is a project of ideas inspired by two antecedents, one African and the other European. The first is the great Alexandrian library, and the other is the creation of the international university city of Paris which took place in 1923, after the Great War, to contribute to the achievement of world peace. Each country had to build a residence in spaces ceded by the city to generate a framework of confluence and exchange between students, writers, artists and writers. The basic objective is to unite Africa and Europe through a two-way university and cultural project in which the fluctuation of students and experts is continuous. The Euro-African house of the Mediterranean.

"At the moment Africa needs a lot of European wisdom, we have to go beyond  humanitarian aid and overcome the colonial mentality," says Mohamed Aly, who is a great admirer of Pharaonic Egypt, "a golden age in which great monuments were erected, but also progress was made in agriculture, navigation, writing and mathematics.

This large university space would be open to all kinds of cultural and academic proposals related to the Mediterranean. The center wants to welcome all areas that influence peace, from international diplomacy, to human rights, through the history of religions, health and food.

There are contacts with PRIMA (Partnership for Research and Innovation in the Mediterranean Area), with entities for peace based in Catalonia, university centers, etc.

The three chimneys could contain the UN peacekeepers' global museum and follow-up offices for the 32 European peace missions active in Africa.

The architectural challenge, an opportunity for change

The great Euro-African house of the Mediterranean has a complete remodeling of the turbine building of the old thermal power station, closed since 2011, which would house the cultural contents. The fourth pyramid of the Mediterranean, totally glazed, would be the fifth integrating element of the whole, formed by the building of turbines and the three chimneys, which would not only fit volumes but also ideas. Looking at it takes us back to the time when Keops built the pyramid that would be the tallest stone building in the world until the 19th century, but it also reminds us that we live in the 21st century. It is the symbol of the union of Africa and Europe for knowledge.