HYDERABAD, India, June 5, 2019 /PRNewswire/ -- According to new market research report by Mordor Intelligence, the market for Liner Hanger System is expected to grow at a CAGR of 5.46% during the forecast period of 2019 – 2024. Major factors driving the market studied are the rising unconventional and deepwater exploration and production activities, increasing need for higher productivity and efficiency, and the advantage of covering vast areas by a single rig employing long lateral drilling methods.

Highlights From The Report: 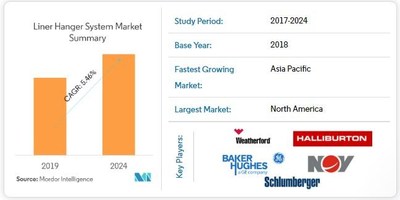 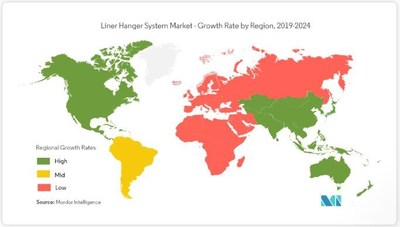 Asia-Pacific to Witness the Fastest Growth:

Mordor Intelligence has segmented the Liner Hangers Market on the basis of type, location of deployment, and geography:

The global Liner Hangers market was dominated by companies, such as Baker Hughes, Schlumberger, Halliburton, and Weatherford International. However, in the last fifteen years, the industry has witnessed penetration of various new companies, such as Innovex Downhole Solutions Inc., and Well Innovation AS, which are strengthening their presence in local, as well as global market.

Mordor Intelligence, LLP. provides market intelligence and advisory services that empowers enterprises to shape their strategic decisions. With a strong team of in-house experts and a host of industry tie-ups, Mordor offers syndicated and custom market intelligence services that have helped more than 700 clients gain an edge over their competition. Mordor's expertise lies in niche analysis with a quick turnaround time, making it the preferred choice for startups as well as Fortune 500 organizations.