TAIPEI, Oct. 22, 2020 /PRNewswire/ -- The "Ministry of Culture of Taiwan" kicked off the 11th Golden Comic Awards at the Taipei New Horizon Building on September 28. The "MOC" presented six awards, among them, the Grand Prize and a NT$500,000 purse. These were granted to Nobi Chang for Time Swirl. 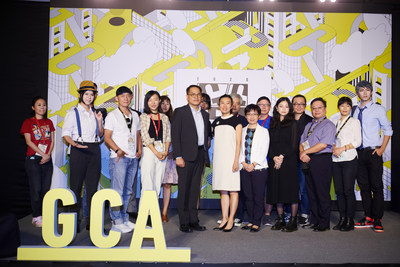 This year, in response to the effects of COVID-19, the international exchange activities traditionally held at the GCAs were transformed into a meeting place of readers and comics industry insiders. Among the events were a theme exhibit of nominees and their works, conferences, business matching events, and a meet-the-comic event. The eight-day extravaganza attracted over 4,000 people including elementary, high school, and university student groups present at the award ceremony.

A three-day special exhibit included well-attended events where fans met comic artists, got books signed, and had their portrait painted by their favorite comic illustrators. Basis Books were on hand, selling comic works by this year's nominees so that fans could take home works done by their favorite authors and artists.

This year's cross-disciplinary exhibit showcased games inspired by Taiwan's original comics by bringing players into first-person contact with story material. Gamification breathes new life into works, and gives players the opportunity to relive the greatness of Taiwan's comics and experience what it's like to be their favorite characters. Among the games featured were "The Monster of Memory: The Dice of Fate," which has attracted comics fans to visit Kaohsiung, and "Scrolls of a Northern City," which takes players into the Taipei of 1935. Also presented was the popular fantasy work "The Apocalypse of Darkness Warfare". Board game adaptations were showcased as well to the delight of fans.

The "MOC" has uploaded short films about nominees and their works to its Facebook and YouTube pages so that fans can enjoy these works again and again. Taiwan Television Enterprise will broadcast the award ceremony on October 16 and again the following day.

SOURCE Ministry of Culture of Taiwan