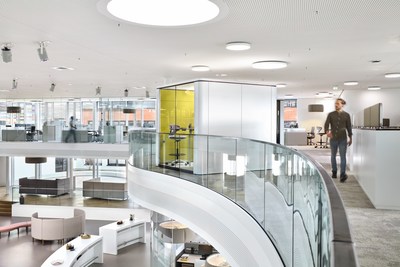 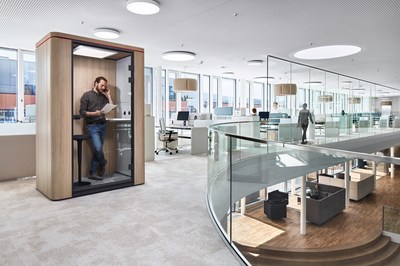 In parallel to a 2.2% overall increase in the total market volume for office furniture (according to the German Interior Business Association, IBA), the Sedus Stoll Group was able to increase its new orders (excluding trade items) by 5.3%, translating to another successive boost to the company's market position.

A closer look at different areas of the Sedus Stoll Group

The Sedus Seating product area (office seating, furniture for communicating and contract furniture) reported a small increase in total new orders of 0.5% to €100.5 million compared to the previous year. Nevertheless, this was still 1.8 percentage points ahead of the market trend for office seating (-1.3%).

In the Sedus Systems product area (office furniture, desks and cabinet systems), the total order volume saw a significant increase of 12.6% to €85.9 million, which is substantially higher than the 5.8% increase in total market volume.

The total value of new orders hit €85.1 million for the entire export sector, and the increase of 7.6% was once again a significant improvement on the previous year. The share of exports among the total volume of new orders therefore amounted to 45.7% in the Sedus subgroup, increasing by 0.8% as a result of the slightly lower increase in orders from Germany.

At Klöber (office seating, conference and lounge furniture), the negative trend in incoming orders was brought to an end and, with a total volume of €20.5 million, Klöber achieved a slight increase of 1.5%, which stands in contrast to the prevailing market trend for office seating (-1.3%). While the order volume in Germany was on a par with the previous year, exports (share of total volume: 27.8%) increased by 7.4%.

Investments in all areas

The Sedus Stoll Group's investments in tangible and intangible assets totaled €15.8 million in the 2018 financial year, which constituted a dramatic increase of €9.2 million compared to the previous year.

The sum total of investments made by Sedus Stoll AG came to €12.9 million. As in the previous year, the most substantial investment of €8.0 million was attributable to the various construction activities in relation to the expansion of the company headquarters in Dogern, where staff were also able to start using the new office building in April this year.

Around 100 employees from twelve different areas now work together in a single space under one roof, in a generously proportioned environment. Officially known as the Sedus Smart Office, this new office space is not just an outstanding workplace for the company's own employees, but is also a test laboratory and showpiece for international customers who visit Dogern from all over the world.

A total of €1.9 million was invested by Sedus Systems GmbH, located in Geseke (East Westphalia, Germany) in 2018. A large part of these funds were invested in the construction of a new multifunctional building, which will be ready for use at some point in 2019.

The extensive modernization and construction work at the Dogern and Geseke sites underscore the company management's commitment to Germany as its center of business.

The Sedus Stoll Group's total number of employees has increased from 873 to a total of 935 (excluding trainees), of whom 533 currently work in Dogern, 292 in Geseke, and 110 at Klöber in Owingen.

A modest but promising trend observed in 2019 to date

The various political and economic events that subdued the economy in the first quarter of 2019 and the more cautious economic forecasts that followed also had some negative effects on the market for office furniture.

Nevertheless, the new year got off to a very good start for Sedus, meaning that the annual order targets for the year as a whole will still be met.

The management team cites the numerous product innovations presented by Sedus and Klöber at the Orgatec trade show last October as the main impetus for this positive performance, most of which have been in full-scale production since spring.