HAIKOU, China, July 1, 2021 /PRNewswire/ -- Imagine learning about the history of the development of Hainan Island in an unusual and fascinating way – through a long scroll of delightful papercut art! The Hainan International Media Center (HIMC) had invited a group of papercut artists, including Huang Haitao and Wei Qin, who have won special recognition from the Hainan Government for their expertise, to jointly create The 100-Year Road and the Hainan Tide, a 22-meter scroll that presents 21 milestone events in Hainan's development in the past 100 years since 1921. 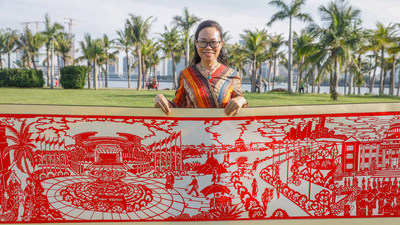 Why choose papercut as the medium? Because besides its unique charm, the art is an intangible cultural heritage of China. It took the group a month to create the masterpiece in the traditional red and white colors.

"It's the longest papercut work I've ever done and also the most challenging," said Huang Haitao, who has nearly 20 years of experience. She described how she worked on her part of the scroll sitting at a long table in her studio. First, she had to meticulously outline the design, including clusters of tiny coconut leaves, on the paper with a cutter, the leaves smaller than her fingernails. Then she would gently press down each with the tip of her nails and carefully cut out the shape along the outline, little by little.

On May 28, she roped in several more artists and after careful consideration, they chose the 21 key events they would depict. They included the Murui Mountain Revolutionary Base where the cradle of the Hainan Revolution stood firm and the Red Detachment of Women, a special unit of women guerrillas who later inspired operas, ballets and even a film. The victory in the Hainan Island Liberation Campaign in 1950 also features on the scroll.

Events from more recent history include the establishment of Hainan as a province in 1988, and the subsequent setting up of the Hainan Special Economic Zone, and the release of the master plan for the Hainan Free Trade Port.

The drawings are the spine of the scroll. Most of the settings include local plants such as coconut and banyan trees. The architecture depicted reflects the transformation from the thatched cottages of the Li ethnic community who live on the island to modern construction symbolized by the Century Bridge.

On June 29, the scroll was finally mounted. "Though the work was extremely difficult, we did it with the concerted efforts of our team," Huang Haitao said. "It made me think of the power of the nation working in solidarity to overcome all difficulties till victory is achieved finally." 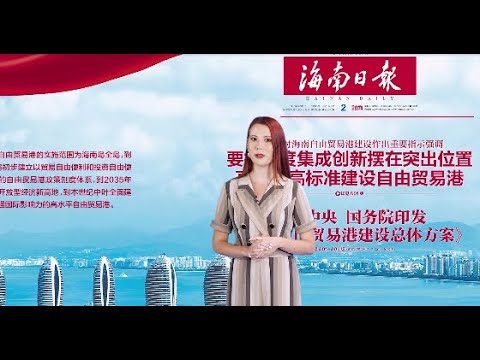