PARIS, July 6, 2021 /PRNewswire/ -- Hong Kong's art auction market is about to post its best-ever first semester on record. According to our data, so far this year the city has generated 15% of total global fine art auction turnover. This growth is all the more remarkable as it is very largely based on sales of Contemporary and even Ultra-Contemporary art. Moreover, the Hong Kong model is now being exported to other countries in the region, including South Korea and Japan. 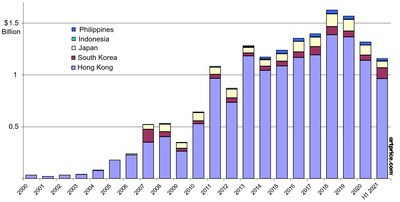 "An uninhibited market is rapidly emerging throughout Southeast Asia," says thierry Ehrmann, President and Founder of Artmarket.com and its Artprice department.

Following in the footsteps of Hong Kong and equally capable of attracting masterpieces from both traditional Chinese painting and works by American superstars, Seoul and Tokyo are in turn asserting themselves as art market hotspots. Around their great national artists, these two markets are helping to expose a whole new generation of young stars, led by Nicolas Party, Ayako Rokkaku and even Mr Doodle.

These artists can be associated with what Christie's dubbed the "Hi-Lite" movement in reference to an art form that is 'lighter' (i.e. less intellectual) and more open to popular culture. This movement – which burst onto the international scene in 2019 –  was immediately undermined by the health crisis. It has nevertheless found an echo in the booming NFT market and undoubtedly also that of Pokemon cards. Both posit the value of a popular, free, jubilant art... even if a little childish.

With or without the major auction houses...

Hong Kong has been successful in attracting and then retaining the most prestigious auction houses on the planet including the Chinese operators Poly and China Guardian and the Western operators Sotheby's, Christie's and Phillips. However, it now seems they are unlikely to need additional auction rooms in Southeast Asia... at least not in the near future.

With 18 works having already fetched over $10 million this year, Hong Kong is clearly the most powerful hub among high-end Southeast Asian art capitals (excluding mainland China). But the experience of Singapore and that of Manila – where sales soared between 2007 and 2014 before falling sharply – reminds us it is not easy to build a sustainable art market in this region. In Taiwan turnover has contracted in 2020 and Taipei is now falling behind its neighbors.

Basquiat no. 1 in Hong Kong

The top three results of H1 2021 in Hong Kong have been hammered for works by the superstar Jean-Michel Basquiat. Indeed, sales of works by the American prodigy – who died prematurely of an overdose aged 27 – literally exploded at the start of the year in Asia. Three canvases, a drawing and a print have fetched a total of $120 million: Hong Kong has therefore hammered 36% of Basquiat's total global turnover in H1 2021... five times more than London.

In Seoul, a colorful bouquet by Marc Chagall, Les Jardins de Saint Paul (1973), sold for $4.4 million at K-Auction. In Tokyo, Pablo Picasso's post-Cubist Bouteille et compotier (1922) fetched the best result at $1.5 million, followed by Yoshitomo Nara's Lollipop (1998), which fetched $750,000. The Japanese Contemporary art star is one of the emblematic figures of the Hi-Lite movement.

See certified biography in Who's who ©:

Artmarket with its Artprice department accumulates data on a permanent basis from 6300 Auction Houses and produces key Art Market information for the main press and media agencies (7,200 publications). Its 4.5 million 'members log in' users have access to ads posted by other members, a network that today represents the leading Global Standardized Marketplace® to buy and sell artworks at a fixed or bid price (auctions regulated by paragraphs 2 and 3 of Article L 321.3 of France's Commercial Code).

Index of press releases posted by Artmarket with its Artprice department: