PARIS, Nov. 18, 2021 /PRNewswire/ -- As announced in our previous press release of November 9, 2021, Artmarket.com hereby declares – with supporting studies and data – that Artprice's NFT® Marketplace is perfectly positioned to generate a future annual turnover of several tens of millions of euros. 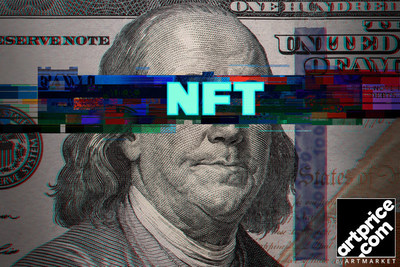 This prediction is based on the economic reality of the NFT medium as it is today and its almost unlimited potential in the rapidly emerging Multiverse of Metaverses.

It is also based on the history, economic model, eco-responsible choices and disruptive philosophy that are part of the DNA of Artprice by Artmarket, which has always sought to place artists at the heart of the Art Market.

In order to appreciate the dimensions and magnitude of what might loosely be termed the 'NFT phenomenon', one needs to start by digesting the following fact: by the end of the third quarter of 2021, NFTs had generated 45 billion dollars around the world!

With its pioneering digital experience on the Internet for almost a quarter century and its leading position in the collection, exploitation and delivery of art market information, Artprice by Artmarket is perfectly positioned to capture a significant portion of this new market – at least several tens of millions of euros – because its clients are already key art market players all over the world.

According to a Harris survey, 11% of American adults have already purchased an NFT. However what makes this figure so stunning is that they had never before bought an artwork. This suggests the existence of a colossal reservoir of new buyers who will inevitably generate new sources of income... and that's just in the USA.

Financial analysts at Jefferies – a prestigious American investment bank – are expecting the NFT market to double in value in 2022 and believe it very likely to represent at least $80 billion in 2025. It is important to remember that the current non-digital secondary art market is worth approximately $10 billion a year. We are therefore looking at a massive new growth driver and a complete change in the dimension and structure of the global art market. (Jefferies is a highly influential broker on global financial markets and is listed as a Fortune 1000 company in the United States).

Meanwhile, Brian Armstrong, CEO of Coinbase (market cap of $73 billion) has speculated that sales of NFTs could overtake cryptocurrency trading. At the company's latest earnings conference call, he said that its future may soon lie in the NFT market.

"We are very excited about NFTs, this is going to be a very large market for crypto going forward, and it is already happening today. It could be as big, if not bigger, than the company's cryptocurrency business" he said.

According to a Reuters press dispatch dated November 17, 2021: 'On the biggest NFT marketplace, OpenSea, there were $2.6 billion of sales in October this year, a massive increase from the $4.8 million in October 2020'.

These estimates and opinions all suggest that the NFT market has gone from a niche market to a multi-billion dollar market in just a few months.

Artmarket.com therefore plans to use its key position in the art market to become a key player in the fine arts segment of the NFT universe/metaverse, which – far from peaking – is growing like wildfire. We firmly believe this sphere is now in its infancy and that Artprice by Artmarket will become one of the reference players in an industry already on track towards exponential growth.

The choice of Artprice by Artmarket in the Blockchain

Artprice by Artmarket will operate with the Ethereum platform and its native cryptocurrency, the Ether (ETH), the second largest cryptocurrency in the world by market value, and above all, the preferred cryptocurrency of the NFT digital art world. The world's major art vendors have all chosen Ethereum including Sotheby's, Christie's, Bonhams and Phillips.

For a number of reasons – not the least of which are Artmarket's environmental concerns – Ethereum with Artmarket will function in staking mode (proof-of-stake). This will avoid both the wanton consumption of data mining energy and major investments in hardware.

According to thierry Ehrmann: "the data mining activity, devoid of any ethical values, has turned its miners into a digital proletariat".

Staking allows Ethers to be immobilized in an Artprice smart contract. In reality, Artprice's primary added-value will be in its certification of the authenticity of the artist and his/her works from its reference databases. Artprice already has an open community of 765,000 artists and 5.4 million involved and contributing members including 4.5 million art collectors and enthusiasts and 900,000 art professionals (auction houses, appraisers, institutions, art dealers, family offices and private banking, etc.).

Artprice's Metaverse community will effectively merge with the economic and virtuous ecosystems in the broader metaverse, and vice-versa, thus allowing exponential growth in full compliance with Metcalfe's famous law on network proliferation.

At the same time, Artprice will allocate 'wallets' to its community.

The development of 'staking' will likely lower entry barriers into the cryptocurrency ecosystem.

Artprice by Artmarket has decided to build its Metaverse with Ethereum 2.0 and the transition to proof-of-stake (POS). The developers of the Ethereum platform always wanted to change to the consensus system by moving to a proof-of-stake mechanism, known to offer better performances.

Artprice by Artmarket is very sensitive to the ecological impact of its activities. Considering the energy consumption in proof-of-work cryptocurrency mining, this decision is also ecologically responsible.

With proof-of-stake, miners are replaced by players called 'validation nodes'. In this mechanism, the latter must deposit, or stake, 32 ETH on an address to be able to validate and add transactions to the blockchain.

Artprice is particularly motivated by the writings of Vitalik Buterin, co-founder of the Ethereum network, who has been lauding the merits of the proof-of-stake consensus mechanism since 2016. The transformation of Etherium towards 2.0 has indeed confirmed the maturity of his project.

Vitalik Buterin's philosophical and political vision is in accordance with the values that thierry Ehrmann has carried through Artprice and Groupe Serveur since 1987, himself a pioneer of the Internet (cf. Time Magazine).

Artprice's IT community, its members and crypto enthusiasts around the world are indeed very pleased with the news of the switch in early 2022 to Ethereum 2.0 (also called "Serenity") via an upgrade of the proof-of-stake platform.

According to thierry Ehrmann – Artmarket.com's CEO, founder of Artprice and CEO of Server group, an "Internet pioneer" since 1987 and Artprice's reference shareholder –

"In historic terms, the nearest thing to the impact of NFTs on the art world was the paradigm shift we now call the 'Renaissance'. Not since then has there been such a massive transfer of power into the hands of artists, because it was thanks to Johannes Gutenberg's printing press that artists were able to print editions of their work.

The Renaissance allowed artists to generate incomes and to control their production independently in their workshops and factories. Today with NFTs, we are experiencing a similar paradigm shift."

Artprice's Metaverse will allow the emergence and liberation of artistic creativity, backed by 25 years of expertise in the economy of artistic creation. In order to be free in their 'FabLabs', artists need to overcome obstacles and technological barriers.

The Metaverse is not a 2D or a 3D world. It is about the dematerialization of the physical world towards a new universe where once impossible experiences become possible.

During the 21st century's Enlightenment, the art world will be reshaped around virtual creation and the virtual (but very real) economy, allowing the emergence of a genuinely boundless space for artists to express themselves.

Even in the virtual world of the Metaverse, singularity will remain one of the most prized qualities.

Artprice by Artmarket's Metaverse will allow the emergence of a creative interaction within an artistic community where collectors and artists will generate an entirely new narrative. The Metaverse will be the basis for a social 'immersion' generating precisely the interaction that artists seek, thus propelling the art market deeper into the Metaverse.

We are in effect talking about a vast "push and pull" ecosystem where all the actors of the art market, including artists and collectors, will share a 'community content'. Artists will be at the center of the Metaverse. The artist's 'FabLab' will be open in real time to the community through the Metaverse.

Experiences within the Artprice Metaverse will be increasingly immersive, with artists having access to all the necessary technologies both easily and cheaply, generating a virtuous economy.

The Artprice Metaverse will support, among other things, art market events such as art fairs and exhibitions which, in their current format, have a seriously negative carbon impact. These events will thus be reborn in the Metaverse by being at last constantly present with their community of artists, gallery owners, collectors and enthusiasts.

The organization of Artprice's clean rooms and its data clouds across continents is a question of space computing, allowing hybrid (i.e. real / virtual) computing, which ensures the permeability between the physical world and the Metaverse.

The Metaverse of Artprice's head office is located deep within the Organe Museum of Contemporary Art which manages the Abode of Chaos. To create the Metaverse of this singular architecture and Total Artwork by thierry Ehrmann, the European group TT Géomètres Experts and its 3D Lab conducted, from 2020 to 2021, a complete digitization of 6,300 artworks integrated into the buildings, outbuildings and perimeter walls over 7,555 m², thereby generating a digitized heritage of 1.2 Terra-Bytes.

The Artprice Metaverse – currently under development – is being designed so that people can forget about rigid IT, a real obstacle to creation.

Artprice by Artmarket's Research & Development has been working for five years on non-intrusive interfaces that allow people to access augmented and virtual realities.

Clearly, 5G mobile networks – with their spectrum of miniscule frequencies  – allow an opening towards the Metaverse and connection to the 'Internet of Things'.

However, the most relevant Metaverse to Art History will be the one that is most relevant to artists and the art community: the Artprice Metaverse...

The Artprice Metaverse Manifesto is quite simply an invitation to the new era of Enlightenment.

See certified biography in Who's who ©:https://imgpublic.artprice.com/img/wp/sites/11/2021/06/Biographie_nov2020_WhosWho_thierryEhrmann.pdf

Artprice by Artmarket, the world leader in information on the art market, has set itself the ambition through its Global Standardized Marketplace to be the world's leading Fine Art NFT platform.

Artmarket with its Artprice department accumulates data on a permanent basis from 6300 Auction Houses and produces key Art Market information for the main press and media agencies (7,200 publications). Its 5.4 million ('members log in'+social media) users have access to ads posted by other members, a network that today represents the leading Global Standardized Marketplace® to buy and sell artworks at a fixed or bid price (auctions regulated by paragraphs 2 and 3 of Article L 321.3 of France's Commercial Code).

Index of press releases posted by Artmarket with its Artprice department:serveur.serveur.com/press_release/pressreleaseen.htm

Artmarket.com: Here's why the art market, via the NFT revolution, ...