The winner of the 2018 Educational Writers' Award is FAR FROM HOME: Refugees and Migrants Fleeing War, Persecution and Poverty by Cath Senker, a topical and richly illustrated book which sensitively examines the root causes of mass migrations of people in the 21st century. 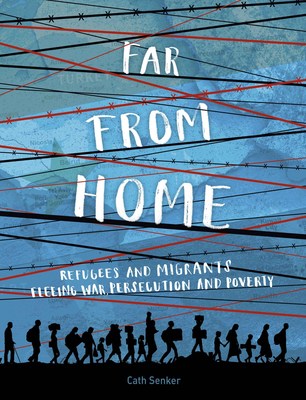 The result of this year's Award - the UK's only award for creative educational writing - was announced this afternoon at the All Party Parliamentary Writers Group (APWG) Winter Reception at the House of Commons. Tom Watson MP, Deputy Leader of the Labour Party and Shadow Culture Secretary presented winning author, Cath Senker with a cheque for £2,000.

Published by Franklin Watts, FAR FROM HOME examines the reasons behind the recent worldwide mass migrations of people due to war, extreme poverty and persecution, explaining some of the specific conflicts, political situations and cultural issues that dominate the headlines surrounding refugees and migrants. It includes first-hand accounts that describe everything from the dangers encountered on migrant journeys and daily life in refugee camps, to encountering hostility, and for some the experience of finding a new home in safe countries.

This year's judges - Philip Arkinstall, a curriculum leader for History in a Wiltshire secondary school; Elspeth Graham, a prolific author of both fiction and non-fiction for children; and Océane Toffoli, a senior school librarian and Vice-Chair of CILIP YLG London- were full of praise for the winning title:

This heart-breaking, powerful and very special book takes a thoughtful and relevant look at a subject we all need to understand and care about. It fully utilises every page, from the maps on the inside covers to the timeline, glossary and further reading section and is extremely readable and accessible for its secondary school audience. Never giving in to media stereotypes, it also provides a clear and compassionate catalyst for discussions about the plight of refugees, highlighting individual experiences and presenting different viewpoints in an impeccably non-judgmental way.

Further information about the winning author can be found below.

The 2018 Educational Writers' Award focused on books for 11-18-year-olds, published in 2016 and 2017. FAR FROM HOME beat off strong competition from the four other titles shortlisted for this year's Award. They were: LOOS SAVE LIVES written by Seren Boyd (Wayland); HOW TO THINK LIKE A CODER written by Jim Christian and illustrated by Paul Boston (Batsford); FROM PREJUDICE TO PRIDE written by Amy Lamé (Wayland); and THE STORY OF PAINTING written and illustrated by Mick Manning & Brita Granström (Franklin Watts).

Now in its eleventh year, the Educational Writers' Award was established in 2008 by the Authors' Licensing & Collecting Society (ALCS) and the Society of Authors (SoA) "to celebrate educational writing that inspires creativity and encourages students to read widely and build up their understanding of a subject beyond the requirements of exam specifications".

About the Winning Author

Cath Senker is an author and editor. With nearly 30 years' experience in publishing, she has written around 160 books for children of all ages, from history, biography, global and social issues to world religions, human geography and environmental topics. She has also published two non-fiction titles for adults, Cybercrime and the Darknet and Stranded in the Six-Day War. Cath is a Royal Literary Fund Consultant Fellow, running writing development workshops for undergraduate and postgraduate students. Earlier this year she was appointed by the University of Sussex as a part-time Academic Skills Consultant.

Philip Arkinstall is Curriculum Leader for History at Hardenhuish School, Wiltshire. He has taught for twelve years in three secondary schools and has acted as an external examiner for AQA and Edexcel for the same number of years. Alongside teaching, he has written for Teaching History and Hodder Education and presented on teaching pedagogy for organisations including the Schools History Project, Historical Association and Keynote Educational.

Elspeth Graham grew up in Northumberland and despite studying Law at University never became a lawyer. Instead she began writing books for very young children with her husband Mal Peet. They wrote many books together, primarily for educational publishers, before Mal went on to become an award-winning writer of young adult and adult fiction. Elspeth continued to write her own fiction and non-fiction books for younger children, and to work on picture books with Mal until his death in 2015. Elspeth lives in Devon with her dog Pedro.

Océane Toffoli is the Senior School Librarian at Wimbledon High School, GDST. She has worked in libraries in France and the UK for many years, in both the public and academic sectors. She is committed to two major British Library associations, being the current Vice-Chair of CILIP YLG London and an active committee member of the SLA London group. Océane is passionate about reading, the learning environment and culture.

The Society of Authors (SoA)

The Society of Authors is a trade union for all types of writers, illustrators and literary translators, and has been advising individuals and speaking out for the profession for more than a century. The SoA administers many other prizes for poetry, the short story, fiction and non-fiction, including the Sunday Times/PFD Young Writer of the Year Award and the Women's Prize for Fiction. The SoA distributed more than £575,000 in prizes and grants in 2018.

The Authors' Licensing and Collecting Society (ALCS) is a not-for-profit organisation for the benefit of all types of writers. Owned by its members, ALCS collects money due for secondary uses of writers' work. It is designed to support authors and their creativity, ensure they receive fair payment, and see their rights are respected. It promotes and teaches the principles of copyright and campaigns for a fair deal. Today ALCS represents over 100,000 members, and since 1977 has paid out almost £500 million to writers.