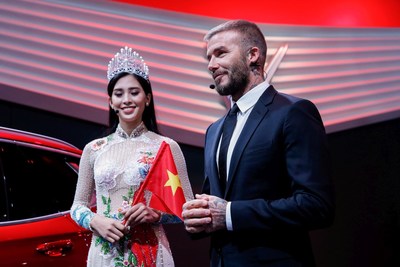 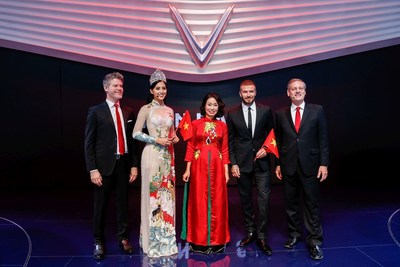 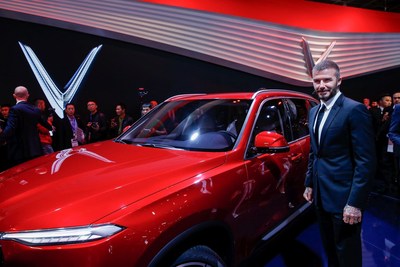 Huge crowds of journalists flocked to the Paris Motor Show display of the new brand where they witnessed him unveil the company's new LUX A2.0 sedan and LUX SA2.0 SUV in what was the vehicles' world debut.

Vietnamese celebrity, Trần Tiểu Vy - voted Miss Vietnam 2018, was also in attendance as the two vehicles were driven onto the stand in front of hundreds of watching journalists, photographers and videographers.

As the cars were revealed he told the assembled crowd: "Vietnam is such a beautiful country and I can see how the VinFast design team have been able to bring some of that beauty alive in the lines of these amazing new cars."

"I've always been a car fanatic, and it's a thrill to be here in Paris to celebrate the arrival of a new carmaker on the global stage," he added, "The passion that the VinFast team have for these cars is infectious. It's an inspirational story and I'm really excited to have been part of this launch moment for VinFast."

VinFast Chairwoman Le Thi Thu Thuy who opened the press conference said: "The Vietnamese people will be immensely proud, honoured and excited to see two such well-known figures unveiling these first cars from Vietnam in such a high profile setting as the Paris Motor Show. Together they represent our intention for VinFast to be a successful automotive brand both in Vietnam and internationally."

"With our ambitious plans to bring these two vehicles to market in such a short time, it was crucial for us to make a big entrance and an immediate impact, and we certainly did that today," she added.

With Vietnamese spirit, Italian design and European technology, the two models have been developed to international standards after the Vietnamese people voted on their favourite styling sketches from a range of options presented in October 2017. VinFast's participation at the 2018 Paris Motor Show will significantly raise the profile of the brand and these two models ahead of the start of sales in Vietnam in September 2019.

In addition to the cars being presented in Paris, VinFast is rapidly developing other vehicles and the company is planning to export to foreign markets in the coming years.

As a proud Vietnamese business with a truly global outlook, VinFast is working with world-leading European design, engineering and production technology partners to create products that meet international standards and customer expectations in terms of design, quality, dynamics, premium in-car features and the ownership experience.

VinFast has also recruited senior executives from some of the industry's leading automotive companies. As a newcomer to the automotive industry, this investment builds a strong foundation to ensure VinFast can build a highly successful automotive business from scratch within a remarkably short timescale.

VinFast is a subsidiary of Vingroup, Vietnam's biggest private enterprise, with interests in several market sectors including retail, construction, real estate and education.

VinFast is a subsidiary of Vingroup, the largest private enterprise in Vietnam. With 25 years' history, Vingroup is aiming to become a world-class technology, industry and services provider. VinFast is the first brand to be launched as part of this strategy.

Deliveries of the first VinFast cars - a sedan and a SUV - will commence in Vietnam from September 2019. In addition, VinFast is developing a wide range of other vehicles, including electric cars, city cars, electric buses and electric scooters. The company also plans to export to international markets in the coming years.