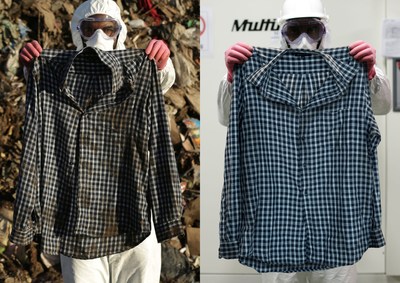 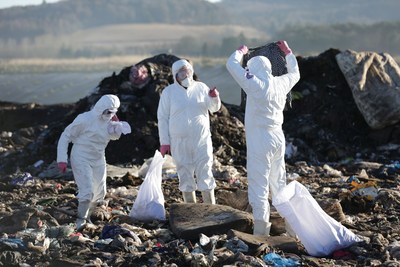 Wasteful Brits have adopted a 'throw-away' culture when it comes to clothes, chucking away £12.5 billion worth of clothing every year, according to research* released today, by Vanish stain remover, as part of their #LoveforLonger campaign.

The data found that Brits throw away, on average, eight items a year, each worth approx. £24 - meaning the value of binned clothes amounts to an astonishing £192 a person. But did all of these items really need to head to landfill? Sadly, no. Over 50% of Brits admitted to throwing away perfectly wearable garments, rather than salvaging them for future use or donating them to friends, family or charity shops.

Vanish is encouraging Brits to reduce the amount of clothing they throw away into landfill - all they need to do is #LoveForLonger. The campaign aims to get people to think twice before needlessly throwing away items by removing everyday stains and hence extending the lifespan of our clothes.

Brits reveal why they throw away clothes they don't need to

One of the top reasons Brits throw clothes away is indeed because of a stain - over a quarter (29%) of people confess to having thrown out wardrobe items simply because of a stain. And for some Brits, it's easier to throw away their stained items than to treat them. Of those that have thrown away clothing due to a stain:

But, it's not just stained clothes that are being thrown away - 27% admitted to throwing away clothing because of a hole that could have been easily sewn up.

Other reasons Brits throw away wearable clothes include needing more space in their wardrobe (18%), getting rid of clothes that belonged to an ex (10%), and clothes feeling 'old' after they had worn them a handful of times (12%).

10% threw away clothes after a few wears as they were cheap to buy, whilst one in twenty threw away an item that they couldn't be bothered to return to the retailer.

45% of Brits had the best of intentions, bagging up clothes to take to the charity shop, only to throw them away in the end. 59% of which, admitted that they ultimately threw them away to save on the hassle.

With its #LoveForLonger campaign, Vanish wants consumers to realise that a stain should not necessarily mean the end of their garment's lifespan, and that by using Vanish products, they can easily remove stains and love their clothes for longer. This one simple change will help reduce clothing waste in landfill.

The research revealed that Brits spend on average £92 a month on new clothes, but typically wear less than half (46%) of their wardrobe. What's more, a new piece of clothing become old in the eyes of Brits after just 20 washes, and on average just 50 days. No wonder then that a staggering 90% of Brits believe we have adopted a throw-away culture when it comes to fashion.

Two fifths (41%) admitted to never having thought about what happens to their clothes when they throw them out. Perhaps that explains why 37% of respondents felt no guilt about throwing clothes away, as only 62% knew that they end up in landfill with other rubbish after we have thrown them away.

However, now knowing that their discarded clothes do end up in landfill, a massive 94% said they would think twice before simply discarding them in future.

For a recommendation on which product to use on your specific stain and fabric, check out the Vanish Stain Solver https://www.vanish.co.uk/stain-solver/

The Vanish range of products is available in most supermarkets and online retailers. Alternatively, please visit https://www.vanish.co.uk/ for information on the full range, pricing and availability.

Stains occur every day on clothes and carpets in thousands of homes. As the UK's stain removal expert, Vanish produce's stain removal products that eliminate almost every conceivable stain; even really tough dried-in stains that have been around for ages. With Vanish in your cupboard, you won't have to worry about the damage stains and dirt can cause anymore to your clothes and carpets, giving you more time to enjoy the more important things in life!

Reckitt Benckiser (RB) is a global consumer goods leader in health, hygiene and home. With a purpose of delivering innovative solutions for healthier lives and happier homes, RB is in the top 25 of companies listed on the London Stock Exchange. Today it is the global No 1 or No 2 in the majority of its fast-growing categories, driven by an exceptional rate of innovation. Its health, hygiene and home portfolio is led by 19 global Powerbrands including Nurofen, Strepsils Gaviscon, Mucinex, Durex, Scholl, Lysol, Dettol, Clearasil, Veet, Harpic, Cillit Bang, Mortein, Finish, Vanish, Woolite, Calgon, Air Wick, and French's.

RB people and its culture are at the heart of the company's success. They have an intense drive for achievement and a desire to outperform wherever they focus, including in sustainability where the company has reduced its carbon footprint by 20% in 5 years and is now targeting to deliver a 1/3 reduction in water impact, 1/3 further reduction in carbon and to have 1/3 of its net revenue coming from more sustainable products by 2020. It is also the Save the Children charity's largest FMCG global partner, with a new partnership vision to radically reduce the world's second biggest killer of under-fives, diarrhoea. RB has been recognised as a sustainability leader in the CDP Global 500 Carbon Performance Leadership Index and received a 2013 Sector Mover Sustainability Award in the 10th Sustainability Yearbook.

The company has operations in over 60 countries, with headquarters in the UK, Dubai and Amsterdam, and sales in almost 200 countries; and employs approximately 36,000 people worldwide. For more information visit http://www.rb.com