BARCELONA, Spain, April 12, 2019 /PRNewswire/ -- The fair dedicated to bridal fashion organised by Fira de Barcelona will hold its biggest ever edition between 23 and 28 April in the Montjuïc venue, with the presence of 35 names on the runway and more than 400 brands at the trade fair, 74% of them international from 34 countries.

The VBBFW 2019 fashion shows will set next season's trends with more than 900 gowns over 4 days, while the trade fair, which take place between 26 and 28 April, will see more than 28,000 bridal gowns, grooms outfits, cocktail and evening wear. 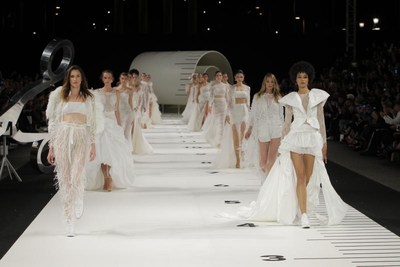 Among the new features this year are Marchesa the US brand founded by the English designers Georgina Chapman and Keren Craig and one of the favourites of celebrities for stepping out on the world's red carpets, which will present its Spring 2020 collection in a show at Barcelona Bridal Night, the fair's gala night; The Atelier, the Malaysian fashion house that since 2017 has had Jimmy Choo, master shoe designer, as the creative director of its bridal collections; and Zac Posen, the famous US designer who will show his latest collections in his line ZAC Posen in Barcelona, among many others.

VBBFW will again hold the "Elle International Bridal Awards", which in the 2018 edition, also held in Barcelona, were given to Carolina Herrera, Reem Acra, Viktor & Rolf Mariage, Carlo Pignatelli, and the Spanish companies Pronovias and Sophie et Voilà, among other big names.

US, China and Spain as leaders

China is the largest producer in the world, the US is consolidated as the market leader and Spain is the largest producer in Europe and second largest exporter in the world. These are the conclusions of the new study "Millennial and Gen Z Brides", commissioned by the VBFW and carried out by IESE lecturer José Luis Nueno, which analyses the new consumer patterns marked by Millennials and Generation Z (Gen Z), made up of always on digital natives, who are strengthening the evolution of the retail channel towards new technologies and omnichannel.

Link to video and photos http://www.barcelonabridalweek.com/en/video-image-gallery