GENEVA, Nov. 2, 2021 /PRNewswire/ -- "Attack Attack Attack" is a non-fungible token for sale on OpenSea, the world's first and largest digital marketplace for crypto collectibles and NFTs. This digital creation is an artwork co-signed by Unikz, a digital artist from Bristol and Andrew Bayles, a photographer from Leeds (UK). The two artists created a digital artwork that reveals a little more about the identity of the street artist Banksy. This NFT is unique because it allows you to discover part of Banksy's creative process. Indeed, the work, which is a digital video loop of 50 seconds, begins on the world-famous image of Banksy's "Rage, the Flower Thrower" and then a picture representing a man throwing a molotov cocktail appears in overprinting. This photo, taken in Leeds (UK) in 1987, is obviously the base image that was used to make the famous Banksy stencil in 2005. Banksy has recently tried unsuccessfully to register this artwork as his personal trademark. The photo, shot by Andrew Bayles, was published in 1987 in an anarchist newspaper, called Attack Attack Attack, produced and distributed anonymously due to the radical information it contained. According to the artwork authors, only a member of the punk / anarchist movement in the late 1980s in England could have seen and used this image to create the famous stencil. This relaunches the discussions about the past of Banksy. According to the artist's official biography, he was only 12 years old in 1987. It's hard to imagine him as a punk, at that age, reading anarchist newspapers. Coincidence? in 1988, few months after the publication of the photo in "Attack, Attack, Attack" newspaper, Robert del Naja (born in 1965) created the trip hop band, Massive Attack. The non-fungible token, certified by Verisart is available for sale on OpenSea, including an original photo print signed by the artists. 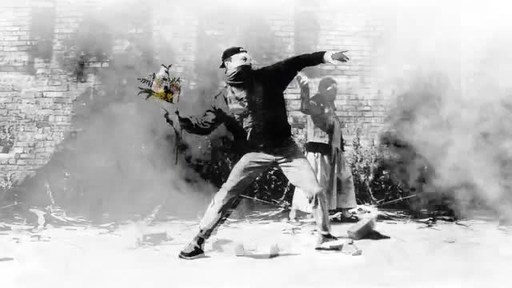