First the world, now the World Cup is in the hands of Jung Jinhwa after the Korea pentathlete won men's individual gold at the UIPM 2018 Pentathlon World Cup Final. 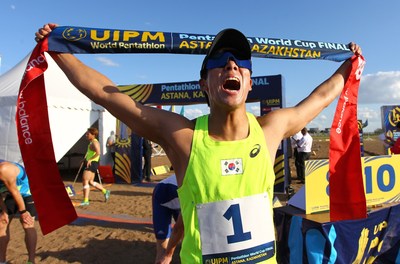 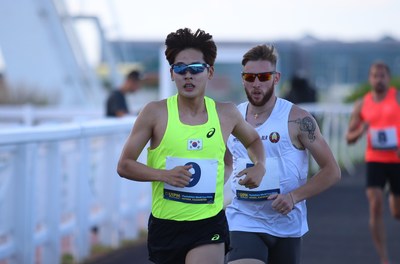 The good news continued for Korea when Jun Woongtae followed his team-mate across the line to win the silver medal at the prestigious pentathlon championships in Astana.

Jung, 29, enjoyed a career highlight in 2017 when he won gold at the Pentathlon World Championships in Cairo, Egypt. Now he is in possession of two of the three biggest prizes in the sport - as well as the world No.1 ranking - with the 2020 Olympic Games in Tokyo only two years away.

Jung said: "The World Cup season has been difficult but I had a few days' break before the World Cup Final and that was a very good choice.

"Today was very, very difficult but it was a fantastic race. There were many people in the group behind me but I didn't think about them. My focus was on first place.

"I'm ready now to focus again on the World Championships."

The 2018 UIPM Pentathlon World Championships take place in Mexico City, Mexico from 6-15 September, and Korea will be confident of once again reaching the podium, especially in the Men's Individual, Relay, Team and Mixed Relay events.

They have been the dominant men's team during the Pentathlon World Cup season, with Lee Jihun winning a gold medal and Jun Woongtae winning gold and silver.

After winning another silver in Astana, in the showpiece event, Jun said: "Today I am the silver medallist and I am very happy, and my team-mate is gold medallist so there is even more happiness in the team.

"The Laser-Run was very difficult, trust me, but I just stayed focused on myself."

Jung started the concluding Laser-Run event in first place with a 24-second lead after a strong performance throughout the final.

He scored 25 wins and nine defeats in fencing, ranked fourth in swimming and second in horse riding after a clear round.

Jun was less consistent and started the Laser-Run in ninth position, but he moved smoothly through the field thanks to calm shooting and powerful running that gave him the best time of the day (11mins 28.75secs).