Researchers at Tokai University report in Nano Letters a systematic study on the effects that using different forms of titanium oxide in planar perovskite solar cells has on the performance of the devices. 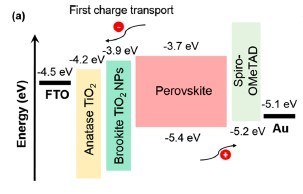 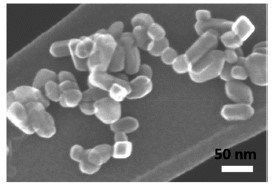 Perovskite solar cells, with a current maximum power-conversion efficiency of 23%, hold much promise for producing photovoltaic energy through devices that are easy and inexpensive to fabricate. Planar cells are composed of a layer made of a light-harvesting material with a structure that goes under the name of perovskite and that is often a hybrid organic-inorganic material. In this layer, the absorbed light generates charge carriers, electron and holes, that are then collected, respectively, in an electron-transport layer and in a hole-transport material, which sandwich the perovskite layer. These two layers are in turn covered with electrodes, one of which is transparent to let the light into the device. Improving the performance of each of these elements is important to maximize the efficiency of the solar cell.

Md. Shahiduzzaman, Masao Isomura, Koji Tomita and colleagues from Tokai university focused their attention in particular on the electron-transport layer. The material of choice for this component is often titanium oxide, whose electronic structure makes it easy to collect electrons from the perovskite layer. Titanium oxide has several crystal polymorphs including anatase, brookite, and rutile. They have different structures and properties and their distinct morphologies influence the quality of the perovskite layer, thus the choice of polymorph influences the overall performance of the solar cell, and understanding this influence is important to optimize the efficiency of devices. In this work, the authors focused on the anatase and brookite forms of titanium oxide. Anatase is cheap, transparent and easy to integrate in the solar cell and is thus a common choice for the electron transport layer, but brookite has promising electronic properties that could lead to better efficiency of the solar cell, and has not been widely explored yet.

The authors used a low-temperature and environmentally friendly technique to prepare highly conductive and single-crystalline brookite nanoparticles that they used to produce heterophase anatase-brookite and brookite-anatase electron transport layers, as well as layers based on single-phase anatase and brookite. To compare the performance of the various electron-transport layers the researchers measured their morphological, optical and structural characteristics, evaluated the interface between the layers and the perovskite, and finally measured the performance of the resulting solar cells.

They found that the use of single-phase brookite resulted in a 14.92% power efficiency, the highest performance reported to date for this type of electron-transport layer. The heterophase layers resulted in performances up to 16.82% for the anatase-brookite phase. As the authors comment, "the present work presents an effective strategy by which to develop heterophase junction electron-transport layers and manipulate the interfacial energy band to further improve the performance of planar perovskite solar cells and enable the clean and eco-friendly fabrication of low-cost mass production."

On one side of the solar cell there is the first electrode, a transparent conductive oxide, typically fluorine-doped tin oxide (FTO) or indium tin oxide (ITO), followed by an electron-transport layer. On top there is the light-absorbing layer made of the perovskite material - a material with an ABX3 chemical formula, where A and B indicate two positively charged ions, and X a negatively charged ion -, then a hole-transport material and finally the second electrode, which is commonly made of gold, silver or carbon. The electron-transport layer is not always present, but it facilitates the transportation of electrons to the electrode and thus generally improves the efficiency and stability of the device.

Power-conversion efficiency and how it's measured

Power-conversion efficiency is the fraction of incident power from the sun that is converted into electricity. The conditions under which the efficiency is measured must be controlled carefully, because the efficiency depends not only on the properties of the solar cell, but also on the spectrum and intensity of the incident sunlight and on temperature. In the lab, solar cells are tested at 25 °C keeping into account the fact that sunlight is attenuated by the atmosphere before reaching the surface of the earth (technically it is said that an air mass coefficient of 1.5, AM1.5, is used).

Tokai University is a private university established by Shigeyoshi Matsumae in 1942.

"Tokai" of "Tokai University" refers to the sea to the east of Asia, namely the Pacific Ocean, and symbolizes the desire to foster the kinds of big hearts, rich spirits, and broad perspectives symbolized by the expanse of an ocean.

The white cross of the school flag symbolizes "Love" and "Justice," and expresses the presence of "Truth" where love and justice meet.

The Tokai University Educational System is one of the largest general education and research institutions in Japan today. To seek mutual understanding and global peace through the education of, and interaction with, young scholars from around the world, we began accepting foreign students from an early stage and have consistently promoted Japanese-language education.