LONDON and AMSTERDAM, May 30, 2017 /PRNewswire/ -- Tiger Beer and WWF are inviting people around the world to help fight illegal tiger trade and be part of 3890Tigers, a digitally-led campaign that uncages art and creativity to raise global awareness of the plight of wild tigers. 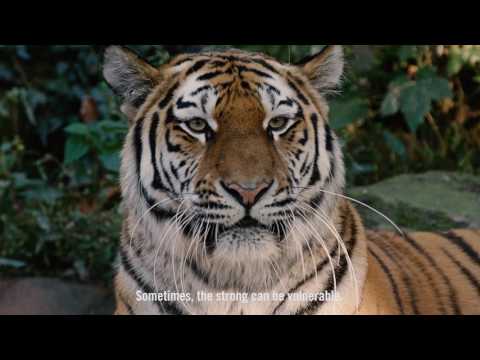 Wild tigers are globally endangered; their numbers have dropped 96 per cent in the last century from an estimated 100,000 to as few as 3,890 today. Illegal tiger trade is one of the main reasons why tigers are disappearing. More than a hundred tigers are killed each year and their parts sold for profit through international criminal enterprises. Every part of the tiger, from skin and bones, to whiskers and teeth, is exploited and used to make products such as medicine, ornamental accessories, and textiles. Today, illegal tiger trade and the wider problem of wildlife trafficking reaches an estimated USD20 billion* per year.

3890Tigers is part of a six-year global partnership between Tiger Beer and WWF in support of Tx2, a global commitment made by the governments of the 13 tiger range countries to double the world's wild tiger population to 6,000 by 2022. The six-year partnership kicks off in 2017 with a donation of USD 1M from Tiger Beer.

As top predators in the food chain, tigers play a vital role in maintaining healthy ecosystems that support many other species. They will soon disappear if nothing is done and, without tigers in the ecosystem, countless other species will be affected.

Leveraging the power of art, Tiger Beer has brought together six artists from six different countries to uncage their creativity and create unique pieces of artwork. Using Tiger Art Intelligence, a creative digital mechanism built on Artificial Intelligence (AI) principles, the public can now virtually collaborate with these artists to create their own unique versions of these striking artworks. Each selfie art generated by AI features the user's selfie alongside that of a tiger, in the artistic style of one of the six artists.

"It is an honour for us to partner WWF in support of their conservation efforts. We can't imagine a world without tigers and if they disappear, it would not only have an environmental impact, but also be a real loss for our culture. Tigers are beautiful creatures that symbolise strength, courage and power, and it's only natural that so much art in human history has been inspired by them. That is why we have chosen art as a way to express this together with our consumers. 3890Tigers brings people and artists together through technology and our goal is to inspire a global movement by empowering a generation of young people to make a stand against illegal tiger trade and make demand for products with tiger parts socially unacceptable," said Mie-Leng Wong, Global Director at Tiger Beer, HEINEKEN Asia Pacific.

"The Tx2 goal is the best chance we have to secure the future of wild tigers, but we are running out of time. If we do not take bold and collective actions now, wild tigers may not have a second chance. This campaign with artists gives each of us the power to lend our voice to tigers. Each portrait created echoes the message that illegal tiger trade needs to stop immediately," said Mike Baltzer, Leader of WWF Tigers Alive.

To be part of the movement, the public can visit 3890Tigers.com to upload a selfie and choose an artist to collaborate with to instantly create a one-of-a-kind selfie art generated by AI. Whether it is enigmatic street-art-meets-calligraphy, delicate paint and ink illustrations or fluttering rainbow origami, people can choose from the artistic styles of China's Hua Tunan, France's Mademoiselle Maurice, Malaysia's Kenji Chai, Russia's Nootk, UK's Nick Gentry or USA's Tran Nguyen to create their selfie art.

By sharing these selfie art on social networks with the hashtag #3890Tigers, the global community can pledge to help fight illegal tiger trade and help stop demand for products with tiger parts.

Speaking about the opportunity to use his craft for the cause, artist from the UK, Nick Gentry, adds, "As humans have become increasingly absorbed in the wonder of technology, we have now arrived at the moment where we urgently need to rediscover our connection with nature. Let's use art and technology as a force for good, to uncage creativity and inspire each other to care for the environment that we have the privilege of sharing with these beautiful animals."

To drive home the urgency of the situation, the iconic beer from Asia will also be removing the tiger from its logo and introducing a limited-edition design on select packaging without the iconic tiger for the first time in 84 years, symbolising the threat of wild tigers disappearing.

3890Tigers first launched in Singapore, the birthplace of Tiger Beer, on 30 May 2017, and will run in other countries around the world including Malaysia, Cambodia, mainland China, Hong Kong, Russia, USA and New Zealand. On 29 July 2017, Global Tiger Day, the campaign will conclude with a series of events to celebrate the support garnered from people globally over the eight-week period.

Be part of the movement. Visit 3890tigers.com and uncage art to fight illegal tiger trade.

Tiger Beer was born in 1932 on the streets of Singapore. A stone's throw away from the equator, its unique tropical lagering technique meant it was able to brew a beer that would keep Asia cool. In 2015, it started using the rays of the tropical sun for brewing, with over 8,000 solar panels installed on the rooftop of its facility in Singapore. Now, every Tiger Beer produced in Singapore is brewed by the sun. 2017 has also saw Tiger Beer take Air-InkTM, the world's first ink created from air pollution, to the streets of the world through creative collaborations between its inventor and the best emerging international artists. Tiger Beer is the number one premium beer in Asia, and the world's fastest growing premium beer, available in more than 50 markets across the globe. For more information, please visit www.tigerbeer.com.

HEINEKEN is the world's most international brewer. It is the leading developer and marketer of premium beer and cider brands. Led by the Heineken® brand, the Group has a powerful portfolio of more than 250 international, regional, local and specialty beers and ciders. We are committed to innovation, long-term brand investment, disciplined sales execution and focused cost management. Through "Brewing a Better World", sustainability is embedded in the business and delivers value for all stakeholders. HEINEKEN has a well-balanced geographic footprint with leadership positions in both developed and developing markets. We employ approximately 73,500 people and operate more than 165 breweries, malteries, cider plants and other production facilities in more than 70 countries. Heineken N.V. and Heineken Holding N.V. shares trade on the Euronext in Amsterdam. Prices for the ordinary shares may be accessed on Bloomberg under the symbols HEIA NA and HEIO NA and on Reuters under HEIN.AS and HEIO.AS. Most recent information is available on HEINEKEN's website: www.theHEINEKENcompany.com

WWF is one of the world's largest and most respected independent conservation organizations, with over 5 million supporters and a global network active in over 100 countries. WWF's mission is to stop the degradation of the earth's natural environment and to build a future in which humans live in harmony with nature, by conserving the world's biological diversity, ensuring that the use of renewable natural resources is sustainable, and promoting the reduction of pollution and wasteful consumption. Visit panda.org/news for latest news and media resources.