In celebration of the film, PRE FAB!, The Quarry Men band reunited to record at Abbey Road Studios on July 8, 2019. PRE FAB! tells the incredible story of Colin Hanton and his role in the launch of the biggest band the world has ever known -- The Beatles. 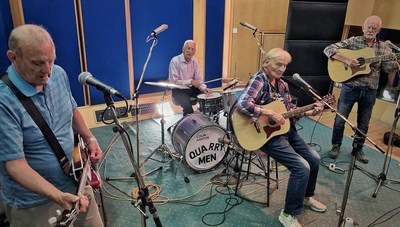 PRE FAB! tells the story of Liverpool-born drummer, Colin Hanton, who was an original member of John Lennon's skiffle group, The Quarry Men, which eventually evolved into The Beatles. The film is currently in production and filming is taking place in Liverpool, London, Los Angeles and New York.

As a fellow band member of John Lennon, Paul McCartney and George Harrison, Colin Hanton had an insider's view of the evolution of The Beatles. He was present on that fateful day when Lennon met McCartney, and was also there when Harrison plugged in and made his on-stage debut with Lennon and McCartney in early 1958. He was also alongside Lennon when he made his debut at the infamous Cavern Club in Liverpool. Additionally, Hanton played with Lennon, McCartney, and Harrison on their first professional recording -- their version of Buddy Holly's "That'll Be The Day."

"Viewers of the new film will be given the opportunity to experience the beginnings of one of the biggest bands in the world and to understand how Merseybeat developed," said Mark Bentley, Producer of PRE FAB! According to Bentley, "when Colin left The Quarry Men, he left behind the nucleus of what would later become The Beatles. Without The Quarry Men there would be no Beatles, a band that brought recognition to Abbey Road Studios. We thought it important historically to have the foundation of The Quarry Men record at the same iconic location."

Newby, Davis and Garry were members of The Quarry Men at various stages through 1956 to 1959. Hanton however was with the group from 1956 through 1959. Over a period of two years, Hanton related his experiences to author Colin Hall, the acclaimed author and custodian of Lennon's former home in Woolton, Liverpool. In his book, also titled PRE-FAB!, Hall meticulously weaves Hanton's memories together with memories of other members of the band to provide a vivid, detailed insight into Hanton's musical career with the future superstars and the era's evolving music scene in Liverpool.

PRE FAB! will take its viewers through a timeline that shows how the band changed from being a group of young boys just playing music for fun to something that influenced and changed the music industry forever. Hanton witnessed Lennon and McCartney share a grand musical vision for the future as their relationship grew and they began writing original songs. For three years, he was part of the beginnings of something that was going to be phenomenally huge. PRE FAB! invites viewers to partake of his journey.