- Cruz Roja supports the release of the film, that arrives in Barcelona the week of the World Refugee Day

CAIRO, June 20, 2019 /PRNewswire/ -- The Egyptian producer and actor Mohamed Aly presents in Barcelona The Other Land, a social content film, which narrates the odyssey of three young Egyptians trying to illegally emigrate to Italy, fleeing from their disadvantages lives. The screening will begin the week of the World Refugee Day (June 20) and Cruz Roja has given its support to the premiere. 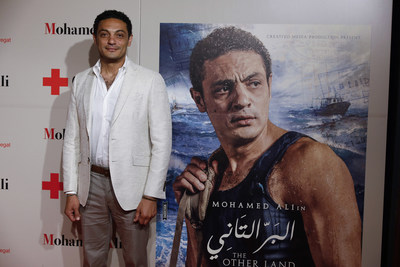 At a time when the Mediterranean Sea has become the deadliest maritime route for refugees and migrants, the feature film, directed by Ali Edries, expresses in images the difficulties of that risky journey from the point of view of its protagonists. Emotion and action go hand in hand in a story that was shot in the open sea and finished on the Catalan coast of El Garraf.

"I wanted to make a film that would tell a human story, to convey a message," explains Mohamed Aly, producer and protagonist of The Other Land, the film that has earned him the Luxembourg Peace Prize, awarded by the Foundation for the Peace of the Schengen area and the World Peace Forum, in the category of art. The award, which he picked up in person, last week, recognizes his commitment to initiatives to promote pace in categories such as Fine Arts, painting and sculpture. The European organization also recognizes its involvement in the creation of a cultural-pharaonic project in Barcelona that builds cultural bridges between Africa and Europe.

The Egyptian entrepreneur, with relevant businesses in the field of construction, is a recognized actor in his country after participating in 4 television series and 3 successful films. In Instagram alone, has almost half a million followers.

Accustomed to playing policemen in actions films, Mohamed Aly now gets into the shoes of Said, a charismatic young man who leaves his precarious job in Cairo, his family and his fiancée in search of a better life on the other side of the Mediterranean. "When I got the script I saw clearly that I had to do it, these people take their lives to the limit, they risk everything because they don't have papers to travel," says the actor. The story is written by Zainab Aziz, writer who regularly works with Ali Edries, Egyptian director, which debuted in 2001 with the film Friendship or business.

The complex shooting, which included the challenge of filming in the open sea on boat scenes of great risk, began in 2015 in Egypt and was completed in Sitges. The special effects and post-production were performed in Barcelona by Creativo Productions, DX Productions and The Partner Barcelona.

With Mohamed Aly, the actors involved are Bayoumi Fouad, Abdel Aziz Makhyoun, Mohamed Mohamed Mahran, Amr El Kady, Afaf Shoaib and Hanan Soliman. In 2016, a week after being released, the film's trailer got over a million views. In November of the same year, The Other Land, participated in the official competition of the 38th Cairo International Film Festival.