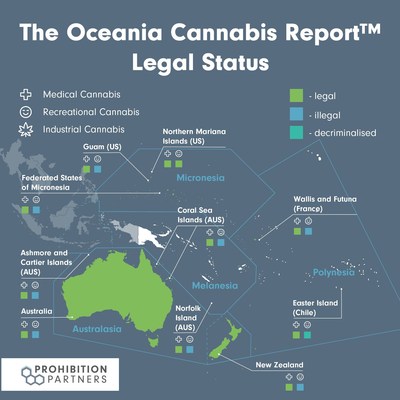 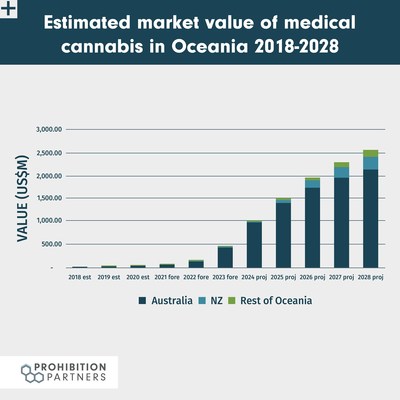 Prohibition Partners' first report on the market reveals that the Oceania cannabis industry could be worth in excess of AUD $12.3 billion to the economy by 2028, representing unprecedented market growth rates over the coming decade.

Key findings from The Oceania Cannabis Report™ include:

Prohibition Partners Managing Director, Stephen Murphy, will arrive in Sydney, Australia this week to meet with the region's leading stakeholders and innovators in the legal cannabis industry.

Mr Murphy said that the cannabis industry in Oceania was in an exciting phase of development.

He said that following Canada fully legalising the use of cannabis, many countries would be keeping a keen eye on the economic impact of a regulated cannabis market:

"Market growth in the Oceania region is underpinned by progressive politics which have greatly improved patient access to cannabis in Australia and will likely legalise medical and recreational cannabis in New Zealand by 2020," he said.

"There are signs that the market is developing in the region, and although foreign companies currently dominate, we've noticed a number of local players - predominantly from Australia - vying for a slice of the international market.

**Research for The Oceania Cannabis Report™ was undertaken in September 2018.

Media copies of the Oceania Cannabis Report™ and interviews with Managing Director at Prohibition Partners, Stephen Murphy, are available on request. You can view associated materials and infographics here.

Trusted advisors to the international cannabis industry we work with investors, entrepreneurs and regulators to identify, qualify and maximise the many opportunities in this emerging frontier.Our reliable and credible insight is maturing the conversation and opening up the market.