The first independent analysis of pharmaceutical industry efforts to tackle drug resistance, published today, finds that as well as developing new drugs companies are also dismantling the incentives that encourage sales staff to oversell antibiotics, setting limits on the concentration of antibiotics in factory wastewater released into the environment, and tracking the spread of superbugs. 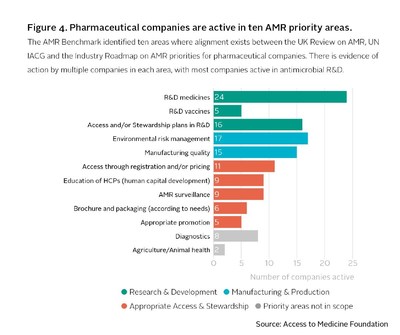 In the Antimicrobial Resistance Benchmark, GSK and Johnson & Johnson lead among the large research-based pharmaceutical companies, while Mylan leads the generic medicine manufacturers and Entasis leads in the biotechnology group. The Benchmark finds room for all companies to improve, as well as evidence of good practice.

"If we don't use antibiotics in the right doses or for the right bugs, we risk giving bacteria a chance to adapt and strengthen their defences, which will make it harder to kill them the next time. The threat that once-deadly infections could again become life-threatening is intensifying," said Jayasree K. Iyer, Executive Director of the Access to Medicine Foundation, which publishes the Benchmark. "Pharmaceutical companies have a critical contribution to make to the effort to tackle superbugs."

Antibiotics are losing their effectiveness at an increasing rate, accelerated mostly by their misuse in humans, animals and crops. The drugs must be used sparingly, in order to minimise the chances for bacteria to outsmart them. There is now wide recognition at the highest political levels that more needs to be done urgently to slow the pace of antimicrobial resistance (AMR), with AMR initiatives being launched by the United Nations, the G7 and G20. Bringing drug resistance under control requires coordinated action from governments, policy-makers and public health authorities, doctors, farmers and pharmaceutical companies, as well as patients. Most companies in the Benchmark have signed up to industry-wide commitments, as set out in the January 2016 Davos Declaration on Combating Antimicrobial Resistance.

The Benchmark compares how a cross-section of the pharmaceutical industry is responding to the threat from drug-resistant infections. It measures the 30 most active players in antimicrobial development and production and includes multinational pharmaceutical companies, biotechnology firms and manufacturers of generic medicines. The main areas tracked are: R&D for new antimicrobials, policies for ensuring antibiotics are manufactured responsibly, and approaches to ensure antimicrobials are accessible and used wisely. Information was gathered and cross-checked from multiple sources.

"While pharmaceutical companies are addressing AMR, for most of them, this is only the start. Yes, there are important new medicines in the pipeline - but it is widely accepted that there are not enough to replace the ones that no longer work. The Benchmark uncovered a few very good examples of companies addressing access and stewardship for individual products," Iyer said.

GSK and Johnson & Johnson lead the eight large research-based pharmaceutical companies included in the Benchmark. GSK has the most antimicrobial medicines in its R&D pipeline, including for pathogens experts view as the highest priority targets for AMR. GSK is one of only two companies to fully separate bonuses from the volume of antibiotic sales, removing the incentive for sales staff to oversell antibiotics. Johnson & Johnson focuses its attention on tuberculosis (TB): access to its breakthrough medicine for multidrug-resistant TB is being tightly controlled through national TB programmes. These leaders are followed by Novartis, Pfizer and Sanofi together. Pfizer performs particularly well in stewardship measures, while Sanofi is stronger in R&D. Novartis' delivers a consistently solid performance in most areas.

Biotechnology firms have a critical role to play in developing new antimicrobials. Among the 12 the Benchmark covers, Entasis leads, particularly when it comes to planning ahead to help ensure successful candidates will be made accessible but also used wisely. It is followed by Polyphor, Summit and Tetraphase in joint second place.

Generics manufacturers account for the majority of antibiotics sold today, giving them significant power to slow the growth of antimicrobial resistance (AMR). In comparison with the other companies analysed, the level of transparency in this group is low. The leaders in this group show a more defined response than that of their peers, addressing either affordability or the rational use of their products. Of the 10 evaluated, Mylan leads, with the strongest performance in several areas, including an equitable pricing approach and environmental risk-management strategy. Mylan is followed by Cipla then Fresenius Kabi.

"One of the strongest messages to come out of the Benchmark is the huge power of generics companies to stop the superbugs. These companies produce the largest volumes of antibiotics, and have been doing this for decades. Some have only recently started tackling AMR. If they can be encouraged to really step up, we will see a big impact."

The Benchmark's key findings include:

How the Benchmark compares

The Benchmark measures companies against the consensus view on areas where they can and should be contributing to efforts to limit AMR. The Access to Medicine Foundation defined these areas by engaging top experts and a broad range of stakeholders in antimicrobial resistance and global health in a rigorous process to develop the methodology for the Benchmark. The Benchmark was designed to have the flexibility to be sensitive to differences between the companies when it comes to the focus of their business, their portfolios and strategies. The Antimicrobial Resistance Benchmark is made possible with financial support from UK Department for International Development and the Dutch Ministry of Health, Welfare and Sports.

The graphs & figures from the Key Findings and other figures in the report are available upon request.

The Access to Medicine Foundation, which publishes the Benchmark, is an independent non-profit organisation based in the Netherlands. It aims to advance access to medicine in low- and middle-income countries by stimulating and guiding the pharmaceutical industry to play a greater role in improving access to medicine.

For 10 years, the Foundation has been building consensus on the role of the pharmaceutical industry in improving access to medicine and vaccines. It publishes the Access to Medicine Index every two years, with the next Index due in late 2018. In 2017, the Foundation published the first Access to Vaccines Index. This is the first Antimicrobial Resistance Benchmark.