XUZHOU, China, May 8, 2017 /PRNewswire/ -- Suning Holdings Group ("Suning" or "the Group"), through its subsidiary, Suning Real Estate, has opened its latest retail complex, Xuzhou Suning Plaza ("the Plaza"), in Xuzhou, Jiangsu province. The move is set against the backdrop of rising economic power and consumption upgrading in second- and third-tier cities in China. It is also the group's largest endeavor to upgrade its retail landscape in the country and bring international brands to more local consumers. 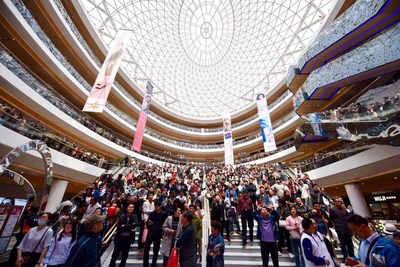 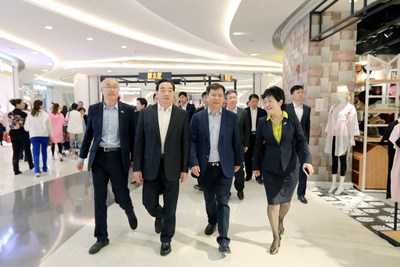 Xuzhou Suning Plaza includes around 1,000 renowned domestic and international brands, some 50% of which are newcomers to the city, such as HUGO BOSS, MCM, G Givenchy, Michael Kors and Vivienne Westwood. The premieres of these global brands at the Plaza helped to attract more than 500,000 people and gained the daily operating revenue of 7 million USD on the first day.

"We are very pleased to see that the new plaza has attracted many visitors. We expect to meet more demands of the consumers from the second and third-tier cities in China as we can see the growing purchasing power there," said Jin Ming, President of Suning Real Estate.

Xuzhou is a third-tier city in China and a developing economic powerhouse in Jiangsu. According to the China National Bureau of Statistics, the disposable income per capita of Xuzhou in 2016 was up 9.4% on a year-on-year basis, ranking quite high among the entire province. By the end of 2016, Suning had built more than 20 Suning Plazas, mostly in second and third-tier cities including Nanjing, Wuxi, Zhenjiang, Fuzhou and Taiyuan. With a booming economy and an unsaturated market for international brands, these cities hold larger potential for overseas businesses compared with major cities like Beijing and Shanghai.

The secret to Suning's success of finding a home for overseas brands in China lies not only in choosing the right locations, but also in the Group's overall capability to integrate resources in different industries, as well as its vision of "going smart" - using data and information gathered via its online and offline channels to track the latest consumer trends and demands, mapping out targeted promotion plans for businesses. Consumers also enjoy a better shopping experience with Suning's abundant retail services and convenient devices as e-commerce payment tools.

Suning has been a frontrunner in the evolution of Chinese retail industry, maintaining constant growth even in the face of an ever-changing consumer culture and technology landscape. "In the Internet Age, success is all about opening up and sharing. How much an enterprise owns is no longer important; it is the ability to integrate that really matters," said Zhang Jindong, Chairman of Suning Holdings Group.

Founded in 1990, Suning Holdings Group, through its subsidiaries, is a market leader across six industries: Retail, Real Estate, Media and Entertainment, Investment, Sports, and Financial Services. Two of Suning's subsidiaries are publicly listed, Suning Commerce Group and LAOX Japan. In 2016 Suning ranked as the second-largest Chinese non-state owned enterprise. With online and offline retail platforms serving a market of around 280 million loyal consumers, Suning is able to provide comprehensive services for consumers, as well as reliable and efficient support to overseas companies that are just entering the Chinese market.