LONDON, May 21, 2019 /PRNewswire/ -- Spink is honoured to present the first part of the Michael Gleason Collection, comprised of the original master recordings of musical performances of eighteen world-renowned artists performing over sixty songs at Abbey Road Studios. The auction will take place on June 20th, 2019 at Spink's headquarters office in London. 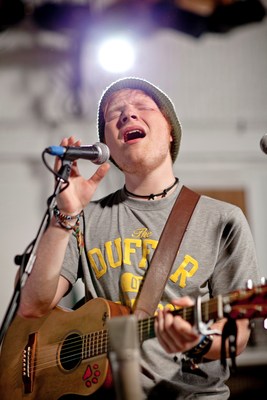 In 2005, Michael Gleason, a successful Texan entrepreneur and producer residing in London, decided to create and produce Live from Abbey Road, a new music television performance series. Inspired by the 1967 original idea of The Beatles to make live broadcast recordings at Abbey Road Studios, the idea was to record sublime musical performances from some of the world's greatest musical artists in the best studio in the world.

A Star Masterpiece Collection was born. From 2006-2012, more than one hundred and forty world-class musical artists came to Abbey Road Studios as a result of a very special invitation: to perform for the global series Live from Abbey Road. The series reached over 120 countries.

This superb collection is comprised of the only original master recordings of the musical artists' performances made on their day at Abbey Road Studios.

Hours of never-seen video footage and never-heard audio are included with each artist. There are no other copies of these master recordings.

To create the best recordings possible, up to ninety microphones were used to record instrumental and vocal sound straight into the famous Abbey Road sound desks. To produce the best video footage possible, up to eight high-definition film and digital cameras captured every performance, as well as on-camera interviews with the individual artist or musical group. Several takes of a song were recorded in order to achieve the best possible live audio and video.

As per Michael Gleason: "In the upcoming auction, I selected with Muriel, eighteen of my favourite artists and bands. Just to list a few, Ed Sheeran, Seal, the Gipsy Kings, Jamiroquai and The Killers… They cover a wide range of music tastes and appeal to a diverse audience. Now is the time to make it accessible to music lovers, art collectors, museums, music schools, artists and their labels, everybody who wants to own rare unique content. If you are a music collector, or love to collect but have never collected music before, these beautiful, original single edition audio and video recordings and photographs will be a priceless addition to your collections for you and generations to come."

Muriel Eymery remarked, "To own a collection of original master studio recordings is the Holy Grail for all music lovers and extremely rare. Many of us dream to own an original recording of their favourite artist's or band's performance. When I met Michael Gleason, I knew this dream could come true for collectors around the world. A collection of this size and importance has never been available to collectors and the public at large until now. Each lot is in itself an important masterpiece of modern music history."

Here is a complete artist list for the June 20th auction:

For each artist, a lot has been assembled and includes:

A USB flash drive, in a dedicated leather case, loaded with the final master audio and video recordings, for ease of use while on the move. It is sleek, covered in white leather with gold letters reminding its content: "The Michael Gleason Collection of Original Recordings – Recorded at Abbey Road Studios", offered in a Spink box.

A visually stunning, translucid, lathe cut vinyl dub plate, pressed with the final master versions of the songs recorded by the Artist (or the Band). The central vinyl artwork shows the name of the artist/band, the date and location of recording, and "Edition 1/1".

A Glyph 1TB External Hard Drive of all of the digital recorded material, (or in a lot where the video footage is on film tape, the original tapes are included.)

A poster sized, framed black and white still photograph, and two additional, desk size, unframed, photos of the Artist (or the Band) taken on the day of the performance.

A signed certificate of authenticity from Michael Gleason.

Spink is the world's leading auctioneer of Stamps, Coins, Banknotes, Medals, Bonds & Shares, Autographs, Wine & Spirits, Books and Handbags & Accessories. Since its foundation in 1666, the Spink name has become synonymous with tradition, experience and integrity. Holder of royal warrants and numerous records for prices achieved at auction, Spink offers an unparalleled range of services to collectors worldwide. Headquartered in London, with offices in New York, Hong Kong, Singapore and Switzerland, Spink holds over 70 auctions a year. Catalogues can be accessed through the Spink website (www.spink.com) or via the Spink App for iPhone and iPad. www.spink.com

1. The Vendor urges buyers to satisfy themselves that they have the necessary rights, permissions and entitlements in the relevant jurisdiction to reproduce, communicate to the public, show or otherwise deal with the film and audio recordings.

2. The Vendor does not warrant that the film and audio recordings comprising the lots are appropriate for any particular purpose or audience.

3. The Vendor is not authorizing that the buyers are entitled to reproduce, communicate to the public, show or otherwise deal with the film and audio recordings.

6. Representations or statements by the Vendor as to authorship, genuineness, origin, date, age, provenance, or condition of the photographs, film and audio recordings involve matters of opinion. The Vendor undertakes that any such opinion will be honestly and reasonably held and accept liability for opinions given negligently or fraudulently.