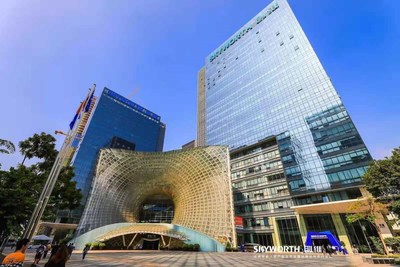 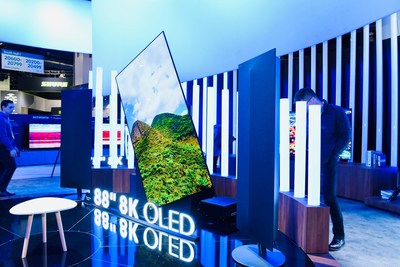 For the Reporting Year, revenue of the Group amounted to RMB37,277 million and gross profit achieved RMB7,502 million with an increased margin of 1.6 percentage points year-on-year (YoY) to 20.1%. Profit for the year amounted to RMB1,031 million, up by 22.9% during the previous period. Revenue from the China market was approximately RMB26,006 million, contributing 69.8% of the Group's overall revenue, while that from overseas markets recorded RMB11,271 million, equivalent to 30.2% of the Group's overall revenue and representing an increase of 4.9% YoY.

Leveraging on its insight into the trend of the industry, Skyworth has worked to transform its businesses from manufacturing to modern services, from hardware to software, and from terminal products to smart systems.

During the Reporting Year, the Group's revenue of multimedia business recorded revenue of RMB21,505 million.

In 2019, Skyworth embraced the opportunity brought by the substantial development in next-generation technologies such as 5G, AI and VR to have built an open big-screen AIoT ecosystem that featured its two key technologies, Swaiot and TrensAI, as its Smart Home solution. According to statistics from market consultancy All View Cloud, Skyworth topped the list among domestic brands in OLED TV shipments nationwide with a market share of 39.6% in 2019.

The Group managed to enhance its brand exposure domestically by offering its 100-inch 4K ultra-high-definition (UHD) Display TVs at Tian'anmen Rostrum during the military parade for the 70th anniversary of the founding of the People's Republic of China, and in ASEAN by sponsoring the Southeast Asian Games. Moreover, it also became a key partner for Google in developing Android TV and AIoT smart home businesses, which again helped enhance its global influence.

Revenue from the Internet value-added services of Coocaa System increased significantly YoY by 50.2% to RMB826 million. As of the Reporting Year-end, activated smart terminals totalled approximately 44.30 million domestically, with approximately 15.53 million being active daily. With investments from iQIYI, an affiliate of Tencent and an affiliate of Baidu, Coocaa has strived for content innovation and operational efficiency enhancement in big-screen Internet and in-home Internet services, thereby consolidating its leading position in the domestic OTT industry.

The Group's revenue of smart systems technology business increased by 12.56% YoY to RMB9,598 million. Revenue in the China market was RMB5,699 million and in overseas markets, up 39.4% to RMB3,899 million.

In 2019, Skyworth proactively embraced China's national action plan of UHD industry and saw significant growth in the four segments of broadcast operators, major domestic telecom operators, domestic Internet OTT retail market and overseas markets. Notably, one major breakthrough of the Group was the approval and release by the International Telecommunication Union of the multi-mode set-top box industry standard (ITU-T J.298) developed by its subsidiary Skyworth Digital. Moreover, its strategic partnership with Google and Netflix helped it tap into the traditional pay-TV market overseas.

After having proposed its forward-looking concept for smart home appliances, Skyworth is now on the path of shaping the modern smart home industry by introducing home appliances featuring a smart control centre (system) that allows voice control and touch screen interaction.

The Group's results of smart appliances business were also strong. Revenue in China went up by 10.4% YoY to RMB3,077 million, while that in overseas markets grew dramatically by 55.4% to RMB1,218 million. Its strategy for domestic market – key account customization and e-marketing for trending items – saw initial success, and the prioritization of Middle East, European, African and Asia-Pacific markets yielded a rapid growth in its overseas business.

In Skyworth, considerable investment was made in research and development (R&D) in 2019 to optimize the value chain of 5G with 8K and to explore technologies related to smart home systems. R&D expenses for the year recorded a substantial increase of 9.2% YoY to RMB1,843 million. The Group also completed 15 major R&D projects and filed a total of 1,164 patent applications. Powered by its robust R&D capabilities, its gross profit margin rose by 1.6 percentage points YoY to 20.1%.

With China accelerating the construction of 5G networks, industrial Internet and other new infrastructure, Skyworth will prioritize the R&D of technology and products related to smart home and UHD video, thereby offering user-centric products for a smart and healthy future home life.