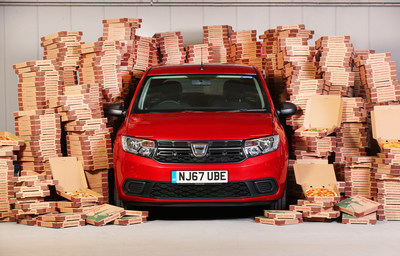 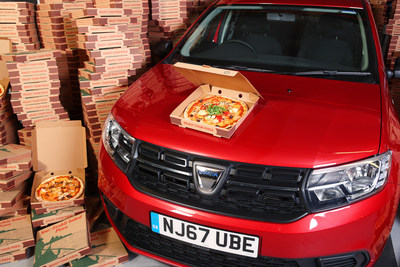 Dacia, the best value car brand in the UK, has found that in the five years since launching in the UK, it has saved its customers an incredible £1.5 billion¹ when buying a new car. That's the equivalent of £13,100 per customer, when comparing the average cost of a new car with the cost of all Dacias sold in the UK over the last five years.

To celebrate five years of offering incredible value, Dacia is giving savvy Brits the chance to save even more 'dough' ('dough' - 'pizza', see what we did there?) by partnering with Deliveroo to give people £10 off their next takeaway pizza order. That's the same as 13 years' worth of pizza² over the course of just one week - 'Dacia-lot of dough!'

Dacia offers the best value new cars on the market - and it's not just about price. The Dacia Sandero has not only been the most affordable car on sale in the UK since 2013 - starting at an incredible £6,995 - but has been awarded the title of 'Best Small Car under £12,000' by the industry experts at What Car? for the last six consecutive years.

To get a 'pizza the action' and enjoy money off your takeaway this week, just head online to Deliveroo Foodscene (http://bit.ly/2IqLFXQ) to claim your personalised 'Sander-dough' discount code, and enjoy a taste of the simple joys in life, courtesy of Dacia!

¹ Figures courtesy of JATO, based on the average cost of a new car sold in the UK between January 2013 and January 2018.

² Based on 2017 research from Deliveroo that shows the average person will spend £1,000 a year on takeaways.

Dacia is pronounced da-tcha (as in Thatcher).

Relaunched by parent company Groupe Renault in 2004, Dacia launched in the UK in January 2013 and enjoyed the most successful start ever for a new car brand in the UK.  The Dacia range consists of the Dacia Duster, a sporty all-terrain vehicle, to family vehicles such as the Dacia Sandero and Dacia Logan MCV. Dacia continues to enjoy great success with over 5 million Dacias sold in Europe since the brand's revival in 2004. More than 120,000 Dacias have been sold in the UK over the last five years.