SANYA, China, Sept. 20, 2018 /PRNewswire/ -- On September 17, Yan Chaojun, Member of the Standing Committee of the Hainan Provincial Party Committee and Secretary of the Sanya Municipal Party Committee, led a delegation from Sanya to Stockholm, Sweden where he signed a memorandum of understanding between the Sanya Tourism Development Committee and Norway's KinaReiser AS for the launch of a Sanya-Oslo air route. Pu Zhengdong, cultural counselor to the Chinese embassy in Sweden, acted as the witness to the signing. 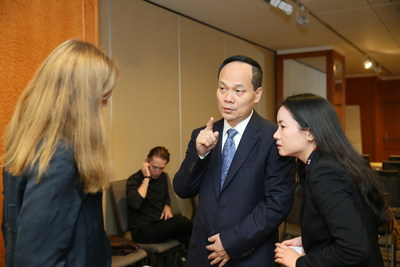 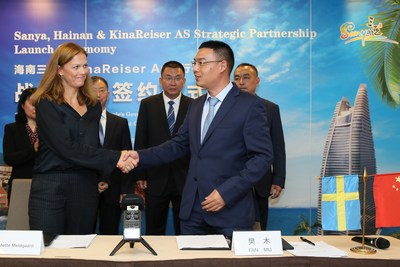 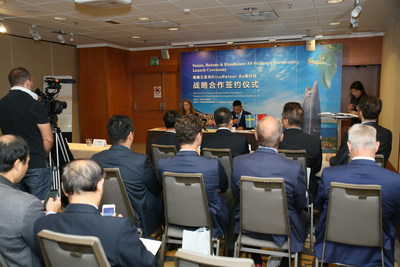 As part of Sanya's efforts to promote the creation of a free trade zone and port in Hainan province, the city has been strengthening ecological protection, beautifying the landscape, enhancing infrastructure and upgrading services in recent years in a move to be in full compliance with international standards. The vast improvements to Sanya, both inside its accommodations and tourist venues as well as on its streets, beaches and parks, are highly visible, as the city embarked on a project to create a fully secure and highly reliable tourism environment for visitors from the four corners of the globe. From January to July of this year, Sanya received 432,300 inbound visitors (including one-day visitors), a year-on-year increase of 9.32 percent with many arrivals coming from countries including Argentina, Australia, Austria, Belarus, Canada, Estonia, Finland, Germany, Indonesia, Italy, Kazakhstan, Latvia, Lithuania, Luxembourg, Malaysia, Mexico, New Zealand, the Netherlands, the Philippines, Poland, Portugal, Qatar, Russia, Singapore, South Korea, Spain, Sweden, Switzerland, Thailand, the United Kingdom and the United States.

Furthermore, the preferential policies put in place by Sanya for the aviation industry are very competitive. The Sanya municipal government will also provide policy support to charter operators and travel agents with the ability to deliver large numbers of inbound tourists. Since the beginning of the year, Sanya has taken advantage of a series of favorable policies, especially the new visa-free policy for visitors from 59 countries, as well as proactively invited overseas travel agencies to visit and fully understand Hainan's tourism market. The province has engaged in efforts to enhance the awareness of Sanya's tourism industry worldwide, organizing invitation-based promotional tours as well as promotions to stimulate local agencies to launch their own efforts internationally. To date, 34 air routes are in place between Sanya and foreign cities, with 33 of them already in operation.

According to a head of the Sanya Tourism Development Committee, signing the cooperation memorandum for the Sanya-Oslo air route is not only a fruitful achievement of Sanya's effort to grow the number of destinations that are within 12 hours travel time by air, but also a revitalization of Hainan's many years of effort in expanding into the Nordic market, as well as a further leveraging of the reform and opening-up policies made possible by the new visa-free policy. The launch of the new route not only opens up the tourism channel from Sanya to northern Europe, facilitating the voyage for Chinese tourists traveling from Sanya to Oslo, but also gives Scandinavians and other Northern Europeans an opportunity to choose Sanya as a vacation destination and to experience the life and culture of Hainan Province. The new route will accelerate the conversion of Sanya into a widely-known international travel destination and bring the city one step closer to transforming itself into a world-class seaside tourist locale.