LOS ANGELES, May 7, 2021 /PRNewswire/ -- Saban Music Group (SMG) singer, songwriter, and producer Nakkia Gold released her latest single, "Justice (Get Up, Stand Up)" featuring GRAMMY® and Golden Globe® Award-nominated recording artist Wiz Khalifa, Bob Marley and The Wailers. A remake of "Get Up, Stand Up" by Bob Marley and The Wailers, "JUSTICE" is a rebirth of the militant anthem, which played an integral role in the fight for equality and human rights in 1973. Fifty-three years later, Americans continue to face inequality, systemic racism, and a long, painful history of violence in the black and minority communities. In response, Los Angeles-born singer Nakkia Gold is taking action through the immediate release of her single "Justice (Get Up, Stand Up)," which has already gained national attention. 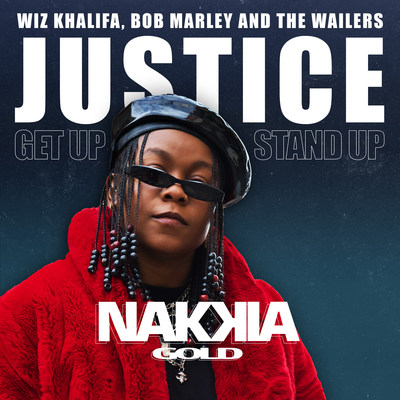 Nakkia Gold commented, "The struggle has made us strong. This is the moment to break through the chains of social injustice. This song is a call to action in a time when it's needed the most."

When SMG founder Haim Saban heard the track, he immediately recognized Gold's talent and signed her to the label. From there, "Justice (Get Up, Stand Up)" was played for Cedella Marley, who gave her full blessing for the use of her father's iconic lyrics in this uplifting song.

Cedella Marley said, "I am proud that my father's legacy continues to live on through his music. His message of peace and equality transcends, especially today, during these challenging times. I wish Nakkia the best in her new endeavor with Saban Music Group and only hope her message resonates during this time of much-needed change."

Wiz Khalifa stated, "Bob Marley has always been an inspiration to me. I was pumped to hop on this track and keep his message alive about continuing the fight."

Gus Lopez CEO of Saban Music Group, said, "The first time I heard Nakkia sing, it felt powerful. I knew people would listen and be motivated by it. My goal is for Nakkia to help connect people in ways never done before."

Inspired by her core belief that "music tells a story," Nakkia Gold distinguishes herself from other artists by empowering her community with her soul-inspiring voice that weaves a tapestry of emotion and rich, melodic texture rooted in R&B and contemporary music.

CHECK OUT "JUSTICE (GET UP, STAND UP)" HERE

Nikki Mason, known professionally as Nakkia Gold, is an American singer, songwriter, producer, and choreographer from Los Angeles, California. A lifelong performer who grew up with a natural talent for dancing and acting, Nakkia Gold is a new member of the Saban Music Group (SMG) roster. Nakkia Gold is currently working on an EP and collaborating on singles with other artists. In her free time, she volunteers at an organization that empowers young students through hip-hop dance classes.

Bob Marley, a Rock and Roll Hall of Fame inductee, is notable as the man who put reggae on the global map and as a statesman in his native Jamaica. He famously brought together the country's warring factions. Today, Bob Marley remains one of the 20th century's most important and influential entertainment icons. Marley's lifestyle and music continue to inspire new generations as his legacy lives on through his music. In the digital era, he has the second-highest social media following of any posthumous celebrity, with the official Bob Marley Facebook page drawing more than 70 million fans, ranking it among the Top 20 of all Facebook Top 10 among celebrity pages. Marley's music catalog has sold millions of albums worldwide. His iconic collection LEGEND holds the distinction of being the longest-charting album in the history of Billboard magazine's Catalog Albums chart and remains the world's best-selling reggae album. Marley's accolades include inductions into the Rock and Roll Hall of Fame (1994) and ASCAP Songwriters Hall of Fame (2010), a GRAMMY® Lifetime Achievement Award (2001), multiple entries in the GRAMMY® Hall Of Fame, and a star on the Hollywood Walk of Fame (2001). For more information, visit bobmarley.com and facebook.com/bobmarley.

Multi-platinum selling, Grammy and Golden Globe-nominated recording artist Wiz Khalifa burst onto the scene with mainstream success with the release of his first major-label debut album, ROLLING PAPERS‎ in 2011. ‎ROLLING PAPERS spawned the hugely successful hits "Black and Yellow," "Roll Up," and "No Sleep" and gave Wiz the platform to win the award for "Best New Artist" at the 2011 BET Awards and "Top New Artist" at the 2012 Billboard Music Awards. As a follow-up to ROLLING PAPERS, Wiz Released O.N.I.F.C. in 2012. This album featured tracks "Work Hard, Play Hard" and "Remember You" featuring The Weeknd. His third studio album, released in 2014, BLACC HOLLYWOOD, ‎debuted at #1 on Billboard's Top 200 album chart and included the hit single "We DemBoyz." Soon after, Wiz's track,‎ "See You Again," off the FURIOUS 7 soundtrack, catapulted to the top of the charts across 95 countries. Holding the #1 spot for 12 consecutive weeks, "See You Again" broke records by being Spotify's most-streamed track in a single day in the United States and in a single week in 26 countries. In addition to winning 3 Teen Choice Awards in 2015, "See You Again" continued its success by winning a Critics' Choice Award in the "Best Song" category, winning two Billboard Music Awards in the categories "Top Hot 100 Song" and "Top Rap Song," earning three Grammy Awards nominations in the categories "Song of the Year," "Best Pop Duo/Group Performance," and "Best Song Written for Visual Media," and a Golden Globe nomination in the category "Best Original Song – Motion Picture." Wiz released his album, KHALIFA, in February 2016 as a thank you to fans which included the tracks "Bake Sale" featuring Travis Scott and "Elevated." In June of the same year, Wiz collaborated with Juicy J and TM88 to debut TGOD MAFIA PRESENTS: RUDE AWAKENING and embarked on his co-headlining "The High Road Summer Tour" with Snoop Dogg. On April 20, 2017, Wiz launched his mobile app, Wiz Khalifa's Weed Farm, which has garnered over 10.1 million downloads and is currently being played in over eight countries and six languages. Later that year, Wiz's mixtape, LAUGH NOW, FLY LATER, was released in November and featured the chart-topping hit, "Letterman." His latest studio album, ROLLING PAPERS 2, which is certified gold, was released in July 2018. Following the release, Wiz and rap duo Rae Sremmurd hit the road for their "Dazed and Blazed Tour" throughout summer 2018. In February 2018, Wiz partnered with Sovereign Brands to create McQueen and the Violet Fog, an Award-winning gin and rated by the NY Times as the "Best Gin." In April of 2019, Wiz released his 5-part docuseries with Apple Music, "Wiz Khalifa: Behind the Cam," which gives viewers an exclusive look into his life and career. In the summer of 2019, Wiz went on his "Decent Exposure Summer Tour" with French Montana, Moneybagg Yo, Chevy Woods, and DJ Drama. In November 2019, Wiz starred in Apple TV+'s "Dickinson" as the character of Death alongside Hailee Steinfeld; Wiz will also be featured in the upcoming second season, debut on January 8, 2021. Wiz is also a series regular in Fox's animated sitcom, "Duncanville," which premiered February 2020, with a second season coming soon. On 4/20 of 2020, Wiz released his latest project, The Saga of Wiz Khalifa, which features his tracks, "Contact," featuring Tyga and his latest single, "Still Wiz." In October of 2020, Wiz, along with Nextbite, launched his latest business venture, a delivery-only restaurant chain, HotBox by Wiz. The restaurant is now in all major metro areas. Most recently, Wiz released his latest playlist, Taylor Nights, and Wiz has joined the Professional Fighters League World Class Ownership Group. In his advisory role, Khalifa will collaborate with the league to integrate various pop culture elements – from music integration and content creation to MMA lifestyle apparel.