HONG KONG, Oct. 18, 2016 /PRNewswire/ -- Wasion Group, a market leader of integrated solutions in smart metering, smart power distribution and energy management in China and international markets, has deployed Rethink Robotics' Sawyer on its assembly line for manufacturing single-phase energy meters. Wasion is moving forward with smart manufacturing initiatives by leveraging smart, collaborative Sawyer robots that are easy to deploy and can meet the precision specifications for the companies' factories. 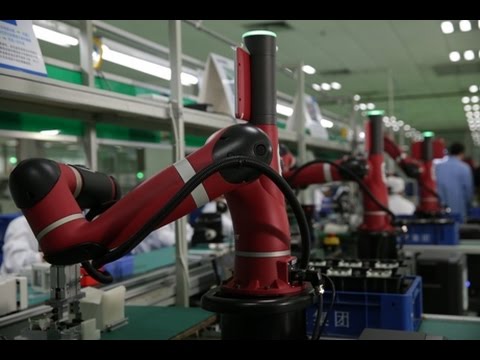 Wasion Group produces 35 million units of various smart metering, power and energy management equipment annually. With a diversified product portfolio, Wasion's production lines need to accommodate a variety of products in lower volumes. The company has been vigorously looking for highly flexible automation solutions in an effort to optimize production in a highly customized environment, enabling the company to meet changing market demands and expedite delivery.

Wasion has turned to Sawyer as the answer to safe, flexible and efficient production. Unlike other robots, Sawyer has compliant motion control, and can feel its way into precise and fragile fixtures, even if a part position changes. This feature enables adaptive repeatability, and allows Sawyer to work precisely in many environments, much like a human does.

"We see smart manufacturing as a significant driver of our company's growth. We are just beginning to introduce this level of automation into our manufacturing processes, and we are pioneering the practice in China. Deploying Rethink Robotics' smart, collaborative robots will enable us to speed up our production and migrate to smart manufacturing," said Liao Qianzhong, general manager of production center, Wasion Group Limited. "We have already seen positive results from our initial deployment of Sawyer, and we also see tremendous potential for wider use in our operations."

The company has already measured significant growth since deploying the Sawyer robots in July.

Productivity has improved by 45 percent, while operational costs have decreased by 25 percent and the part defect rate has dropped by more than 50 percent.

"Wasion advocates innovation, and we encourage our team to embrace new technologies. Collaboration with Sawyer increases our employees' efficiency and supports them to pursue innovation," said Qianzhong. "The workers who were previously on the assembly line will be retrained and assigned to other value-adding positions."

Wasion expects to invest RMB 159 million in smart manufacturing in the coming years, primarily focusing on metering and electrical equipment production, as well as research and development. The company believes robotics technologies, especially collaborative robots, will play a pivotal role in its visionary plan.

"With the introduction of the Made in China 2025 initiative, China is aggressively addressing rising wages and gaps in productivity through smart manufacturing," said Jim Lawton, chief product and marketing officer at Rethink Robotics. "Sawyer is playing a significant role in this transformation for companies like Wasion Group with its ability to shift between a variety of tasks, adapt to the variability of the factory and improve production quality."

For more information watch the video of Sawyer on the factory floor at Wasion Group.

About Wasion GroupThe China-based Wasion Group Limited is an international leader for integrated solutions of smart metering, smart distribution and energy management. A publicly listed company in Hong Kong, Wasion Group is focused on the research, production and sales of energy measuring and energy saving management integrated solutions. Its products and services are widely applied to the energy supply industries such as electricity, water, gas and heating power. Its products are also used by the large energy consumption sectors such as public construction, petrochemical, traffic and transportation, machine manufacturing, metallurgy and chemical, schools, hospitals, as well as residential users. Please visit its company website www.wasion.com for more information.

About Rethink Robotics Rethink Robotics is transforming the way manufacturing gets done, with smart, collaborative robots able to automate the 90 percent of tasks that until now, have been beyond the reach of traditional automation. Its Baxter and Sawyer robots, powered by the Intera software platform, adapt to real-world variability, can change applications quickly and perform tasks like people do. The result: manufacturers of all shapes, sizes and industries get the fast-to-deploy, easy-to-use and versatile automation solution they need to increase flexibility, lower cost and accelerate innovation.

Based in Boston, the Rethink product suite is available in Asia, Europe and North America. The company is funded by Bezos Expeditions, CRV, Highland Capital Partners, Sigma Partners, DFJ, Two Sigma Ventures, GE Ventures and Goldman Sachs. For more information about Rethink Robotics, please visit www.rethinkrobotics.com and follow us on Twitter at @RethinkRobotics.