SOUTHAMPTON, England, March. 2, 2018 /PRNewswire/ -- The captain and crew of Cunard's flagship, Queen Mary 2, will jointly receive a Medal for Seamanship with the man they rescued from the Atlantic, Mervyn Wheatley.

Wheatley, who has sailed over 400,000 miles, including three transatlantic crossings in one year, was jointly awarded the Medal for Seamanship with Captain Wells, who collected the award on behalf of the crew of Cunard's Queen Mary 2, at a ceremony held at The Royal Cruising Club in Knightsbridge last night. 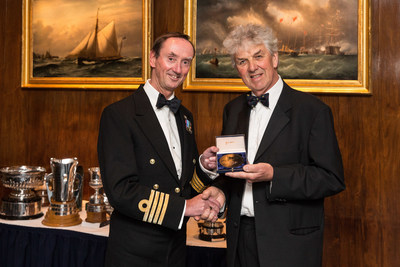 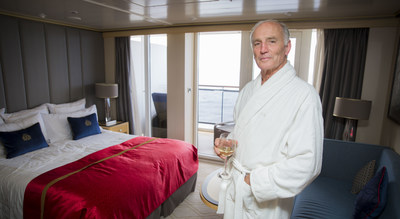 After a huge wave knocked over his boat, and she started taking on water, Skipper, Mervyn Wheatley activated his distress beacon. In heavy seas and rough weather, with the help of RAF Hercules and Canadian search and rescue services, the crew of Queen Mary 2 took on the task of bringing the skipper to safety.

Captain Wells coordinated the crew who launched of a tender which plucked Wheatley from the water and took him back to the shores of Southampton.

Captain Wells, Master of Queen Mary 2 said: "I am honoured to receive the medal on behalf of the crew, from the Royal Cruising Club, with Mervyn."

"It is standard seafaring practice to help someone in distress, Mervyn is a highly experienced mariner and was hugely unlucky to have been hit by such a large wave, I was glad we could help."

Cunard is a luxury British cruise line, renowned for creating unforgettable experiences around the world. Cunard has been a leading operator of passenger ships on the North Atlantic, since 1840, celebrating an incredible 175 years of operation in 2015. Pioneers in transatlantic journeys for generations, Cunard is world class.

The Cunard experience is built on fine dining, hand-selected entertainment and outstanding service. From five-star restaurants and in-suite dining to inspiring guest speakers, the library and film screenings, every detail has been meticulously crafted to make the experience unforgettable.

In 2017, Cunard announced plans to add a fourth ship to its fleet that will be launched in 2022.  This investment is part of the company's ambitious plans for the future of Cunard globally and will be the first time since 1998 that Cunard will have four ships in simultaneous service.