ONCHAN, Isle of Man, May 11, 2019 /PRNewswire/ -- PokerStars, the UFC's Official Poker Partner, has announced three new PokerStars Ambassadors ahead of UFC® 237: NAMAJUNAS vs. ANDRADE in Rio de Janeiro this Saturday.

UFC® 237 provided PokerStars with the perfect platform to announce that the voice of the Octagon Bruce Buffer, as well as UFC heavyweight champion Daniel Cormier and No. 12 ranked light heavyweight Johnny Walker have become ambassadors for the world's largest poker company. 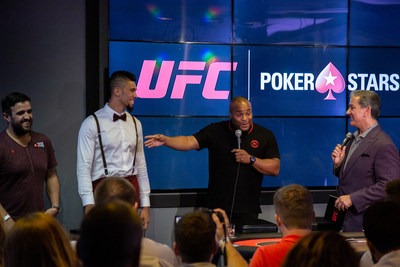 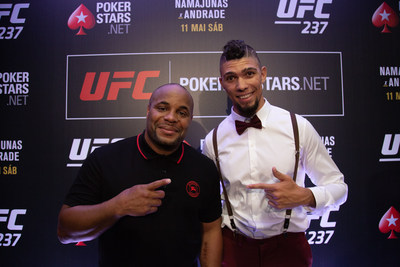 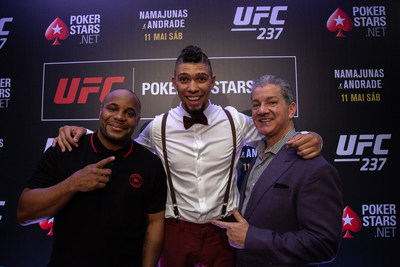 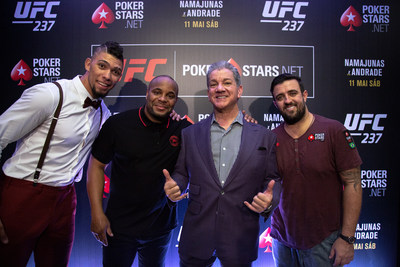 Buffer, Cormier and Walker featured at a special press event following the weigh ins of UFC® 237, which celebrated the collaboration and the launch of PokerStars' first co-branded product, UFC Spin & Go's, while also looking ahead to the many products, promotions and experiences the partnership will bring.

The newest members of team PokerStars were welcomed into the fold by PokerStars Ambassador and poker pro Andre Akkari. "For me and for many Brazilians, poker and MMA are passions," said Akkari. "To give poker fans opportunities to engage with the UFC and to give UFC fans more ways to engage with what they love is really exciting. It's an honour to have such incredible athletes in our corner."

"This partnership brings together two heavyweights of the entertainment world and, luckily for me, two of my great passions," said Bruce Buffer. "I've been a poker player all my life. I'm a regular at the tables in my hometown and I remember seeing Moneymaker's legendary performance back in 2003 right before he became a member of team PokerStars. To join him alongside this great line-up of athletes and poker pros is a great honor for me."

"I'm thrilled to represent PokerStars on their journey with the UFC. I love a challenge and any opportunity to sharpen my game," said Johnny Walker. "PokerStars are the best at what they do. Just like the UFC. It makes sense to bring such world class acts together to offer more exciting opportunities to fans around the world."

"To have such exciting names joining team PokerStars further epitomises our partnership with UFC as we look to bring the thrill of the Octagon closer to our customers," said Christopher Coyne, Chief Marketing Officer, Stars Interactive Group. "We are delighted that fans have really celebrated with us through our activity in the build-up to UFC 237 and we can't wait to bring more new experiences to our fans as we develop our partnership with UFC. Expect to see these major stars getting involved in promotions, events, campaigns, content and more."

Rose Namajunas, Jessica Andrade, Jared Cannonier and Anderson Silva were also depicted in an exclusive series of playing cards artworks created by Marcelo Ment, Carlos Bobi, Cazé and Lidia Viber, which were then hidden across the city. The artworks took fans on a hunt across Rio in a competition that gave them the chance to win the ultimate VIP PokerStars and UFC package for UFC® 237.

There was even more in store at the Jeunesse Arena as Jair Damasceno, who is recognised worldwide for his sculptures, created a two-metre-high sand installation depicting Anderson Silva and Johnny Walker playing poker. The question that remained on every fan's lips: who had the winning hand?

More special UFC and PokerStars products and rewards will be announced in coming months.

Read more about PokerStars' exclusive global partnership with UFC® at the PokerStars Blog.

UFC branded Spin & Go's will be available on all licenses, other than PokerStars.pt and .cz.

UFC®, is the world's premier mixed martial arts organization and the largest Pay-Per-View event provider in the world. With more than 300 million fans worldwide, including 70 million social media followers across all of its digital platforms, UFC's programming is broadcast in over 170 countries and territories to more than one billion TV households worldwide in 40 different languages. UFC produces more than 40 live events annually and consistently sells out some of the world's most prestigious arenas. Since 2001, UFC has been proudly headquartered in Las Vegas, with a network of employees around the world. UFC's current roster boasts more than 570 athletes representing over 55 countries currently on its active roster. UFC FIGHT PASS®, the world's leading digital subscription service for combat sports, delivers exclusive live events, thousands of fights on-demand and original content to fans around the world. UFC was acquired in 2016 by global sports, entertainment, and fashion leader Endeavor, along with strategic investors Silver Lake Partners and KKR, in what is among the largest transactions in sports history. For more information, visit UFC.com and follow UFC at Facebook.com/UFC, Twitter, Snapchat and Instagram: @UFC.