PARIS, April 3, 2019 /PRNewswire/ -- Both have made their mark on footballing history. One has finished his career, the other is just beginning his. What unites them is love, respect for football and a remarkable destiny. Since the World Cup, an affinity has grown between the two men on social media. Today, Hublot brings them together for the very first time, marking a passing of the baton and a moment of recognition between the greatest player of all time and the most promising hope in world football. King Pelé, a Hublot ambassador since 2013, has crossed the Atlantic to meet Kylian Mbappé, the watch brand's newest ambassador, for a truly historic and moving encounter. 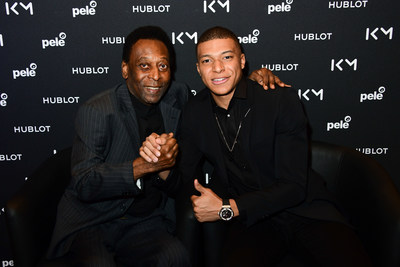 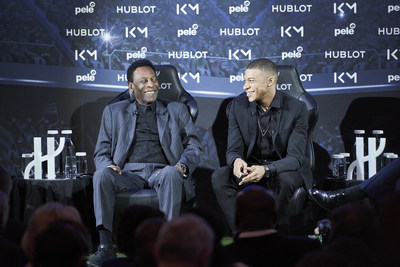 "The generosity of Pelé and Kylian can be seen in their eyes, as can their love of football. This flame, this inextinguishable strength, is what drives these two great champions. They are inspiring new generations of footballers and writing the history of football, so it was perfectly natural to bring them together. Having them in our family is a great source of pride and pleasure, because before being football stars, they are above all great men who command respect." - Ricardo Guadalupe, CEO HUBLOT

"I am honoured to have the opportunity to personally meet Kylian. He embodies the new generation of footballers and espouses the values of a sport that inspires and unites the world. I am happy that he symbolises hope; the hope that anything is possible, for the dreams we must believe in and fight for, regardless of our origins or our social status. For me, the key to success can be captured in two words: humility and perseverance. That is the message that the new generation must convey, and Kylian has perfectly understood this." - Pelé, HUBLOT AMBASSADOR, THE YOUNGEST PLAYER TO EVER WIN A FIFA WORLD CUP™, THE ONLY TRIPLE WORLD CHAMPION WITH THE BRAZILIAN TEAM IN THE HISTORY OF FOOTBALL, UN AND UNESCO AMBASSADOR

"I have learned that the biggest stars and the best players are the most humble and respectful, those who are able to keep their feet on the ground. Respect, humility and lucidity are values that my parents passed down to me and they are values that I am proud to now share with my adopted family, Hublot, and King Pelé, who perfectly embodies what my parents have always taught me —to be a great footballer, you must first and foremost be a great man." - Kylian Mbappé, HUBLOT AMBASSADOR, GREATEST HOPE IN WORLD FOOTBALL, THE YOUNGEST EVER PLAYER TO SCORE A DOUBLE IN THE KNOCKOUT STAGE, AND THE YOUNGEST PLAYER TO SCORE IN A WORLD CUP FINAL SINCE PELE IN 1958

Hublot opens a new chapter in footballing history by bringing Pelé and Kylian Mbappé together for this momentous encounter. The paths of these two men show uncanny similarities. Is this chance, or fate? There are 60 years between Pelé's first World Cup and that of Mbappé. However, the impact of these two players on the history and love of football remains absolute. Pelé and Mbappé are two timeless, devoted and esteemed symbols of the world's most unifying sport, two generations with shared values: Humility, Generosity, Perseverance.

These two exceptional giants are renowned for breaking records, both as forwards who have made speed their trademark. They both won the first World Cup they played in and they were the youngest players (Pelé was 17 years old, Mbappé was 19) to score in and win a World Cup, both while wearing the number 10 jersey. A highly symbolic number in the world of football, the number 10 embodies that moment of perfect balance; the moment at which dreams become reality. In 1958, Pelé wore this jersey by chance; for Mbappé, 60 years later, it was a choice.

He is unique, he is the first, he is different. He is Hublot!

He makes France, the world and the entire footballing planet dream.

Mbappé embodies the new generation that will set all future footballing records. Kylian Mbappé is currently the highest scorer in the French championship. He is a world champion, double French champion (PSG and Monaco) and winner of the Coupe de France (French Cup) and the Coupe de la Ligue (French League Cup) with PSG.

He is the first

Mbappé is the first player since Pelé – 60 years ago – to score a goal during and win a World Cup final at such a young age. He is the youngest Hublot ambassador in the Hublot Family.

A sign of fate: Kylian was born in 1998, the year that marked France's historic victory against Brazil in the FIFA World Cup.

20 years later, by scoring one of the four winning goals in the final, he earned the second star for the French national team. He has just made history, and this is only the beginning.

Mbappé is renowned for his extraordinary powers of acceleration, his unpredictability and his reading of the game. At just 20 years old, he is considered to be one of the best players in the world and was named by FIFA as Best Young Player of the tournament in Russia last summer

An outstanding athlete who makes people smile, Mbappé is also generous, donating all of his match bonuses to the charities he sponsors. The man they call "37", thanks to his top speed recorded at the World Cup, truly makes the world dream.

KYLIAN MBAPPE, THE INCARNATION OF FOOTBALL FOR HUBLOT

The only current player among Hublot's Football ambassadors, Kylian Mbappé will play a decisive role in the watch brand's communications. Deservedly famous, he takes the top ranking!

Founded in Switzerland in 1980, HUBLOT is defined by its innovation, which began with the highly original combination of gold and rubber. This "Art of Fusion" stems from the imagination of its visionary Chairman, Jean-Claude Biver, and has been driven forward by CEO Ricardo Guadalupe since 2012.

The release of the iconic, multi-award-winning Big Bang in 2005 paved the way for new flagship collections (Classic Fusion, Spirit of Big Bang), with complications ranging from the simple to the highly sophisticated, establishing the extraordinary DNA of the Swiss watchmaking house and ensuring its impressive growth.

Keen to preserve its traditional and cutting-edge expertise, and guided by its philosophy to "Be First, Different and Unique", the Swiss watchmaker is consistently ahead of the curve, through its innovations in materials (scratch-resistant Magic Gold, ceramics in vibrant colours, sapphire), and the creation of Manufacture movements (Unico, Meca-10, Tourbillon).

HUBLOT is fully committed to creating a Haute Horlogerie brand with a visionary future: a future which is fused with the key events of our times (FIFA World CupTM, UEFA Champions League™, UEFA EUROTM and Ferrari) and the finest ambassadors our era has to offer (Kylian Mbappé, Usain Bolt, Pelé).

Discover the HUBLOT universe at our network of boutiques located in key cities across the globe: Geneva, Paris, London, New York, Hong Kong, Dubai, Tokyo, Singapore, and at HUBLOT.com

Hublot is Committed to Helping Protect the Rhinoceros and is Now...