ALBLASSERDAM, Netherlands, Jan. 27, 2019 /PRNewswire/ -- Oceanco is proud to have been awarded top honours at the 2019 Boat International Design & Innovation Awards that took place on the 27th of January in Cortina. DAR with exterior design by DeBasto Design and interior by Nuvolari Lenard took home the Judges' Commendation Award for Best Exterior Styling for Motor Yachts 60m and Above.

Criteria for the Exterior Design Award involves aesthetics and innovation. DAR's exterior is sporty, elegant, and high tech. The profile has a unique sense of contrast and homogeneity between the dark glass and the white balconies, providing a constant exchange in shape and lines between the two elements. The biggest challenge, but also the highlight of the exterior design is the unprecedented glass surface of the superstructure, designed as one continuous surface stretching from the Main Deck to the Sun Deck. All the glass is glued to the structure with no use of mechanical fasteners, which requires a very high level of precision. Almost 400 m2 of glass was used on DAR's superstructure. It is not lightweight, but on the flip side it replaces the usual amount of metal of the conventional superstructures.

"The strength of the glass has been calculated taking into account the motions in a seaway," says Oceanco Project Manager Erwin de Looff. "The movement of the panels relative to the adjoining panels has been calculated for every single panel. The glue process has been developed by the supplier and approved by Lloyd's to ensure the mounting of the glass was to the highest standards. Indeed, the whole superstructure has been approved by Lloyd's, including the glass."

The specially treated glass affords the owners privacy from the outside and at the same time yields incredible views from the inside looking out. Views and a connection to the sea have been important design elements throughout. For instance, the Upper Deck has glass bulwarks that allow for total visibility of the water when seated.

"While one can certainly appreciate the grandeur of DAR from afar, the large scale of this yacht is not truly evident until you are close up," says Luiz DeBasto.  "Once on board there is a sense of flow and wellbeing that is generated from the entire design as a whole."

DAR's exterior designer, Luiz DeBasto and Interior designers, Carlo Nuvolari, from Nuvolari Lenard, were on hand to receive the awards along with the Oceanco team. 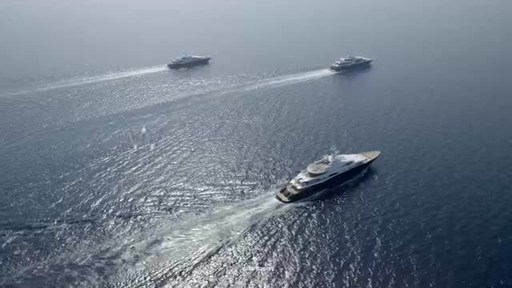 OCEANCO LAUNCHES INTO A NEW REALM WITH SUPERYACHT NFTs...