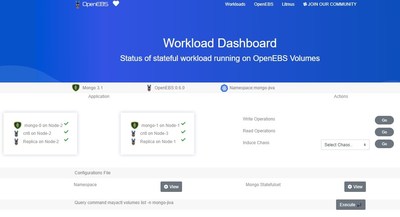 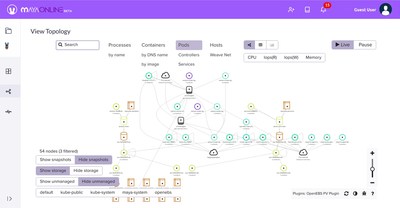 MDAP improves the staging, deployment, testing, and operations of stateful workloads on Kubernetes by tying OpenEBS and Litmus together with MayaOnline - a SaaS solution that provides visibility into workload location and performance - along with MayaData proactive support. Support options include 8x5, 24x7 or managed services. MayaData uses intelligence derived from MayaOnline to provide proactive support that enables developers and operators to focus on higher value-added work as opposed to their data infrastructure.

"MayaData's MDAP platform extends the ease of use of OpenEBS with related capabilities that reduce the risk of using Kubernetes for stateful workloads. Together with the partnership with IBM Cloud Private, MDAP seems likely to accelerate the usage of open source OpenEBS in production by enterprise users."

Artem Larmoliuk, lead solutions architect at the Levi9, a Netherlands based software development company, said: "We use OpenEBS because it helps us move faster to build reliable solutions for our enterprise clients that include stateful workloads on Kubernetes. It is by far the easiest to deploy and operate container attached storage we've tried - and MayaOnline and Litmus are promising ways to save time for users running OpenEBS at scale."

By partnering with IBM, MayaData is participating in one of the fastest growing Kubernetes based private cloud solutions. The integration and other information is detailed at https://mayadata.io/icp

IBM Distinguished Engineer Michael D. Elder said: "We see the open source OpenEBS as a leading example of a new breed of cloud-native infrastructure solutions. OpenEBS leverages Kubernetes to provide reliability and scalability for storage, much like a cloud-native application would for business logic. OpenEBS makes storage more consumable for developers, and we are happy to partner with MayaData on the launch of their commercial offerings as well."

In addition, MayaData released https://openebs.ci/ for the OpenEBS community. This free site joins devstats.openEBS.io and the free level of MayaOnline as no-cost resources for OpenEBS users. The OpenEBS.ci site uses Litmus to give frequently updated validation of the performance of combinations of operating systems, workloads, and OpenEBS itself.

"Many many years ago a few of us coined the term 'software-defined storage'. The limitations of virtualization and of IT of that time limited the success of those efforts. Today, however, microservices, Kubernetes, cloud services and containerization are a perfect storm. Together these trends have enabled infrastructure to compose itself as needed for workloads and small teams. I couldn't be happier for the OpenEBS community and MayaData to be at the forefront of these trends, and I'm thankful for the customers that are increasingly relying on the MayaData Data Agility Platform to free themselves from the burdens of storage management and cloud lock-in."

Pricing for the MayaData Data Agility Platform is based on the number of nodes under management - which are those nodes that are used at least partially for storing data. A free tier is available via sign-up on MayaData.io or MayaOnline.io. MayaData is accepting a limited number of new customers now and will announce general availability in the near future.