LONDON, May 18, 2018 /PRNewswire/ -- A luxury dental brand that manages the smiles of Royalty and celebrities from around the world has seen a dramatic increase in enquiries after they congratulated Prince Harry and Meghan Markle's wedding day on digital billboards around the UK seen by up to 5 million people a day.

When the dental team at YourDentist.co.uk Of Harley Street thought it would be a lovely gesture to congratulate the happy couple, little did they know that by coming up with phrase 'Make Your Teeth Sparkle Like Meghan Markle' this would lead to it going global on social media. 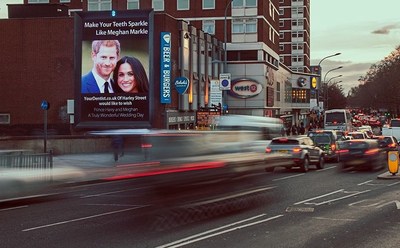 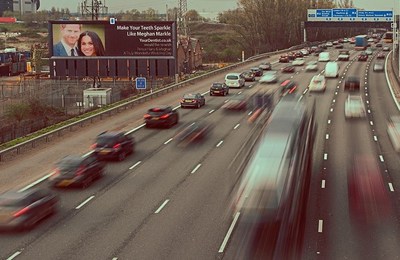 "Ever since the engagement news broke, we started to get more enquiries for smile makeovers with the desired smile being that of Meghan," recalls Peter Joseph one of the Patient Concierge Managers at Harley Street Clinic. "Often patients would ask for a smile like Julia Roberts or Cheryl Cole, whereas now, it's all about the Meghan Markle effect, which is a true reflection of the influence that she has and indeed will continue as she is a real style icon for the 21st Century."

Partnering with 8outdoor media, the celebrity dentists have some 70 giant digital billboards around the UK including one of the biggest billboards in Europe which are being seen by around 5 million people per day. "What's been hilarious is that tourists are arriving into the UK for the wedding and are taking pictures of the many wonderful tourist attractions in London but are getting photographed alongside our 'Make Your Teeth Sparkle Like Meghan Markle' signs and posting the pictures on social media around the world. "The signs also include a picture of the happy couple which shows a radiant Meghan with a beautiful smile and the warm message below wishing Prince Harry and Meghan a wonderful wedding day."

"YourDentist.co.uk  were the first clinic in the world to introduce chauffeur driven Bentleys for our Teeth In A Day patients as well as a private jet service for international patients," continued Peter from the Harley Street Clinic, which looks more like a boutique hotel than a dental clinic, "but the increase is enquiries has been, without doubt, all about Meghan Markle and her beautiful smile. In the last week alone, we have seen an unprecedented rise in calls for Meghan's Smile Makeovers which has resulted in a 1000% increase."