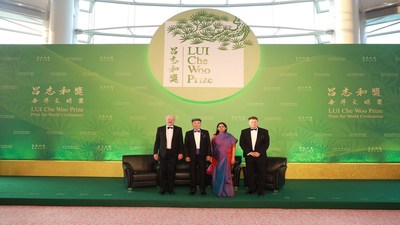 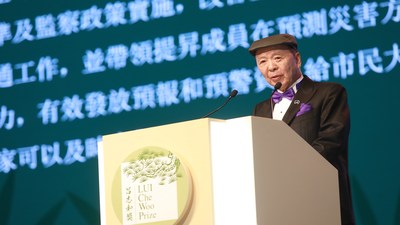 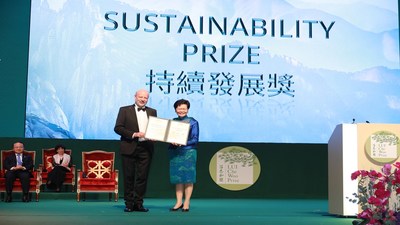 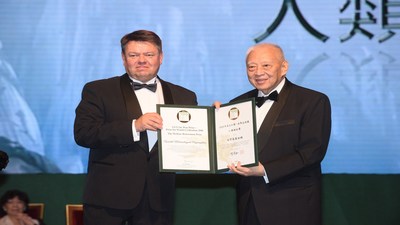 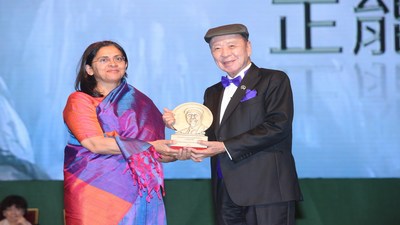 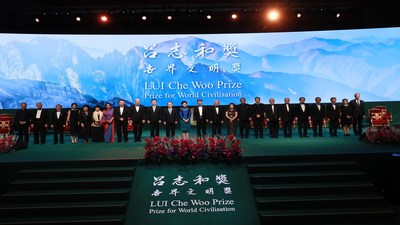 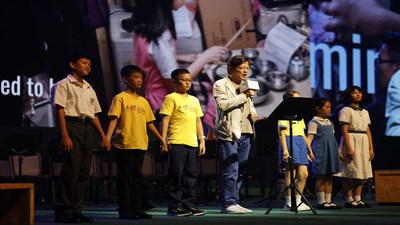 Dr. Lui Che Woo presented at the ceremony to commemorate the occasion. "No distance are too far for like-minded people," he said. "We have travelled thousands of miles to come together because we have a similar vision and philosophy. The three laureates this year share the same vision with the LUI Che Woo Prize.  They not only believe in making a better world, but also overcome difficulties with courage, wisdom, and selflessness. They are role models in their fields and have greatly contributed to the world; inspiring more people to participate and jointly create our future. It is our honour to have the three laureates attending in person tonight to accept the Prize."

Mrs. Carrie Lam also gave a speech at the ceremony and extended her congratulations to this year's awardees. "Their singular contributions to the elimination of illiteracy, the reduction of the impact of natural disasters, and the development of renewable energy respectively, match perfectly the laudable mission of the Lui Che Woo Prize," she said. "The Hong Kong Special Administrative Region is proud to have this home-grown international prize built on Dr Lui's vision and generosity."

Accepting their respective awards at the Prize Presentation Ceremony were the three laureates of the 2018 LUI Che Woo Prize -- Mr. Hans-Josef Fell, the World Meteorological Organization, and Pratham Education Foundation.

The 2018 Sustainability Prize – this year with the Specific Area of Focus Development of Renewable Energy -- was officially presented to Mr. Hans-Josef Fell. Internationally recognised as a founding figure of the global renewable energy movement, Mr. Fell has worked as an environmental pioneer since the 1970s. He established the world's first energy community to produce solar power in 1994, transforming the market for renewable energy, and successfully fought for the adoption of the Renewable Energy Act in the German Parliament. This law has since been replicated over 100 times around the globe, contributing to changes in renewable energy practices worldwide.

"Thank you, Dr. Lui, for establishing the prize, honouring and encouraging activities for a better world," said Mr. Fell during his gratitude remarks at the Prize Presentation Ceremony. "We, as humanity, have the chance to stop global warming with the help of 100% clean renewable energy and a clean carbon-reducing agriculture. This is what I plan to work on together with the Energy Watch Group, with the strong support of LUI Che Woo Prize," he added.

The 2018 Welfare Betterment Prize -- with Reduction of the Impact of Natural Disasters being this year's specific area of focus -- was awarded to the World Meteorological Organization (WMO). WMO sets worldwide standards and provides the framework for international cooperation by supporting its 191 member states and territories to implement the adopted policies, leading to better monitoring, forecasting and communication of meteorological hazards on a global scale. Its persistent effort is pivotal in the tenfold reduction in global loss of life from extreme weather, climate and water-related events observed over the past half-century.

Representing WMO at the Prize Presentation Ceremony was Professor Petteri Taalas, Secretary-General of World Meteorological Organization. "The growing amount of natural disasters is a very timely theme. The Lui Che Woo prize will allow WMO to support disaster risk reduction worldwide. We have planned to use the resources for education of developing country experts, for improving the global meteoalarm system and for early warning services for humanitarian UN organizations. I would like to express my greatest gratitude to Dr Lui Che Woo and the selection committee for offering us this great honour," he said during his acceptance speech.

The 2018 Positive Energy Prize -- which this year had the Specific Area of Focus Elimination of Illiteracy -- was awarded to Pratham Education Foundation. Pratham directly helps one million children attain basic literacy and numeracy annually. Profoundly wedded to evidence-based models, it is now one of the largest NGOs in India and focusses on high-quality, low-cost interventions which address gaps in the education system. Through replicable, scalable models that emphasises on result-driven accountability, Pratham is able to achieve lasting and widely influential success in India's educational landscape and beyond, creating an adaptable demonstration model for governments.

Dr. Rukmini Banerji, CEO of Pratham Education Foundation, accepted the recognition at the Prize Presentation Ceremony. "We are extremely honoured and privileged to have been selected for this Prize. The opportunity to share this stage with our fellow laureates today is an indication that a world of possibilities of collaboration exist in our region as well. In our work we have seen millions of lives changing, creating waves of hope and positive energy for millions more. With the support of the LUI Che Woo Prize, we hope to continue to grow this positive energy," she said.

The Prize Presentation Ceremony also included a special performance by Mr. Warren Mok and the Music Children Foundation. A non-profit organisation providing free orchestra and choir programmes to hundreds of underprivileged children in Hong Kong, the Foundation is dedicated to transforming young lives through the power of music. It shares a belief with the LUI Che Woo Prize that everyone should have the opportunity to achieve their dreams.

In preparation for the Prize Presentation Ceremony, world-famous tenor Mr. Mok worked closely with the children to teach them new skills as they rehearsed the performance together. In line with the aim of the LUI Che Woo Prize to promote harmony and positive energy, this was a fantastic and rare opportunity for the children to see how a person just like them can grow up to achieve exceptional things, through the power of effort and hope. At the ceremony, the children and Mr. Mok showed off their hard work by singing an empowering song; in harmonious celebration of the LUI Che Woo Prize and all the hard work done by the 2018 laureates to help build a better world.

About the LUI Che Woo Prize

Founded by Dr. LUI Che Woo in 2015, the "LUI Che Woo Prize – Prize for World Civilisation" is an annual, first of its kind international cross-sector innovative award for advancing world civilisation and inspiring people to build a more harmonious world. It aims to recognise and honour individuals or organisations all over the world for outstanding contributions and encourages the continuation of that work in three objectives: sustainable development of the world, betterment of the welfare of mankind and promotion of positive life attitude and enhancement of positive energy.

Each laureate received a cash award of HK$20 million (equivalent to approximately US$2.56 million), a certificate and a trophy. Each Prize is awarded to a single recipient, who can either be an individual or an organisation.

The LUI Che Woo Prize is administrated and managed by LUI Che Woo Prize Limited, a charitable company limited by guarantee incorporated in Hong Kong. The Prize Company is led and supervised by the Board of Governors.