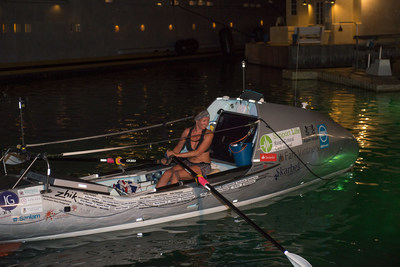 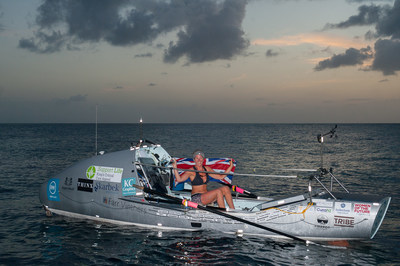 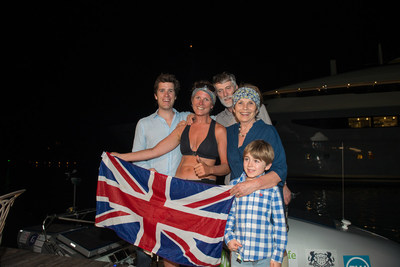 Having only learnt to row last year, Kiko, born and raised in Herefordshire, has rowed the Atlantic alone in 21-foot long Soma of Essex for up to 16 hours a day for seven weeks, slept in two hour shifts, dealt with 70-foot waves, sharks, hand and feet blisters and the least prevailing winds. She has been her own doctor, mechanic, skipper, friend and worst enemy in one of the toughest physical and mental challenges known to man. Only six women have previously completed the journey solo.

Arriving to scenes of jubilation, with crowds lining the coastline and yachts sounding their horns, the Union Jack toting Brit rowed in after what she described as one of the hardest days of rowing in the last two months. Kiko was met by her family - mother Genevieve Matthews, father Paddy Matthews, brother Robin Matthews and nephew Louis Matthews - and was noticeably relaxed, calm and full of energy.

Kiko says, "The thought that eight months ago I was lying in hospital having my brain operated on and now I am here having rowed the Atlantic, I guess I am a bit proud. I have shown that anyone can attempt anything given the right attitude, belief, and support. I want to use my story to inspire women to challenge themselves."

"I didn't get scared by the adverse conditions, I just got on with things. What can you do about it? You have no choice but to carry on, like in life. It was temporary relentlessness. If I did ever get down, I thought of the people willing me on, I wanted to do it for them. The stories they sent me supported me incredibly. By the last two weeks, I was just totally content and at peace; I didn't even listen to music," she says.

In completing the challenge, Kiko has so far raised over £70,000, of her target of £100,000, for King's College Hospital Intensive Care Unit who twice removed a brain tumour from her. In 2009, Kiko, was diagnosed with Cushing's disease, a rare condition that made walking up stairs impossible. The tumour on her pituitary gland caused severe memory loss, psychosis, diabetes, osteoporosis, insomnia and muscle wastage. The second was removed in August 2017 whilst she was in training for the Atlantic crossing.

On land, she has been virtually powered by a team of women, through her 100TogetHER initiative. The collaboration of women from all walks of life, have come together to support Kiko financially and with skills highlighting what can be achieved through community, challenge and collaboration and it's their names which adorn the boat. Part of 100TogetHER is Britain's most successful female Olympian, Katherine Grainger and Tracy Edwards - who skippered the ﬁrst all-female crew in the Whitbread Round the World Yacht Race. She was also coached by Guin Batten, the 2000 Olympics silver medalist.