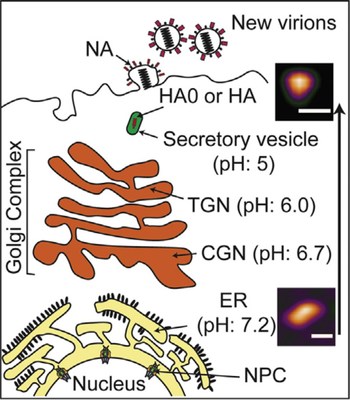 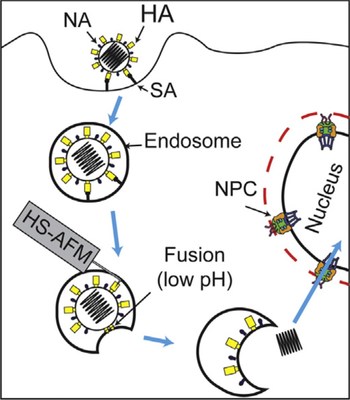 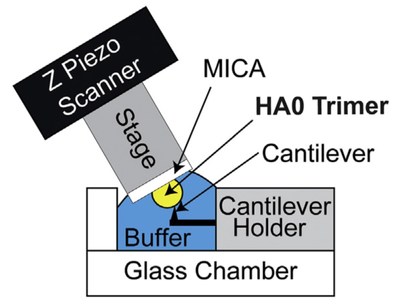 The influenza A viruses, which have instigated deadly pandemics in the past, still remain a major global public health problem until today.  Molecules known as virulence factors are produced by bacteria, viruses, and fungi to help them to infect host cells. One of virulence factors found in the influenza A viruses is hemagglutinin (HA). Researchers at Kanazawa University have recently studied the structure of HA of avian influenza virus, H5N1, using high-speed atomic force microscopy (HS-AFM) and the findings are essential for developing therapeutic approaches against influenza A viruses in future.

HA is initially synthesized by host cells in its precursor form that known as HA0.  Conversion of HA0 to HA is depending on the pathogenicity of influenza A viruses: extracellular conversion for low pathogenic influenza A viruses and intracellular conversion for highly pathogenic influenza A viruses. Therefore, understanding the structure and properties of HA0 is paramount to deciphering HA. Richard Wong and his research team thus sought out to scrutinize HA0 under the microscope. Recombinant HA0 protein of H5N1 was visually analyzed by HS-AFM system developed by Kanazawa University.

Both HA0 and HA exist in homotrimeric forms and conversion of HA0 to HA does not significantly modify the homotrimeric structure. Therefore, it is sensible to use HA as a template to generate HA0 HS-AFM simulation images. Acidic endosomal environment is the critical factor for HA to induce fusion between viral membrane and endosomal membrane in order to release viral materials into host cells. To elucidate the acidic effect on HA0, it was first exposed to an acidic environment. The trimer of HA0 turned out to be very sensitive to the acidic solution and expanded considerably. When conformational changes of hemagglutinin were measured in real-time using HS-AFM, the team found that its area was larger, and its height shorter. Acidic environment essentially made the molecule flatter and more circular, as compared to its original counterpart. This change in conformation was, however, reversible as the structure reverted back to its original form upon neutralization.

"Our pilot work establishes HS-AFM as an inimitable tool to directly study viral protein dynamics, which are difficult to capture with low signal-to-noise techniques relying on ensemble averaging, such as cyro-EM and X-ray crystallography," says lead author of the study Dr Kee Siang Lim. "With high scanning speed and a minimally invasive cantilever, we predict that HS-AFM is feasible to reveal the flow of irreversible conformational changes of HA2 induced by low pH, which is mimicking the true biological events that occur when HA enters a host endosome, in future study."

This study paved the way for investigating biological events within viruses in real-time. The authors state the importance of HS-AFM for this research: "Our work establishes HS-AFM as an inimitable tool to directly study viral protein dynamics, which are difficult to capture with low signal-to-noise techniques relying on ensemble averaging, such as cyro-EM and X-ray crystallography," explains Dr Richard Wong, senior author of the study.

Influenza A virus: The influenza A viruses have caused several devastating pandemics in past and continue to impose serious public health crisis today. The viruses are typically harbored in wild birds and bat. Only influenza A viruses in wild bird have spread to other species including domestic animals via direct contact or airborne transmission. Humans acquire the viruses via zoonotic transmission from domestic animals. Both antigenic drift (mutation of hemagglutinin) and antigenic shift (genetic reassortment that produces new subtype of influenza A) not only alter viral infectivity but also make drug development against influenza A difficult.

High-speed atomic force microscopy (HS-AFM): HS-AFM is a high-definition microscopic technique which enables scientists to simultaneously visualize the structure and dynamics of protein molecules. It can record even millisecond changes induced in the protein due to external forces. HS-AFM is often used to map proteins in bacteria.

The University is located on the coast of the Sea of Japan in Kanazawa – a city rich in history and culture. The city of Kanazawa has a highly respected intellectual profile since the time of the fiefdom (1598-1867). Kanazawa University is divided into two main campuses: Kakuma and Takaramachi for its approximately 10,200 students including 600 from overseas.

Kanazawa University Research: Insights into the Diagnosis and...

Kanazawa University Research: Virulence Factor of the Influenza A Virus Mapped in Real-time