In a recent study published in Scientific Reports, researchers at Kanazawa University show that an artificially synthesized molecule can exhibit compatible activities to natural molecules in its biological effectiveness. 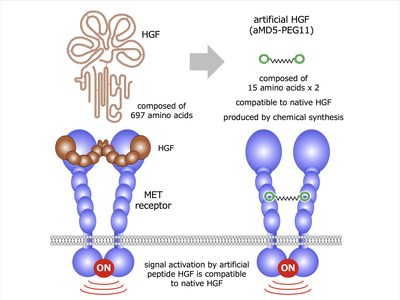 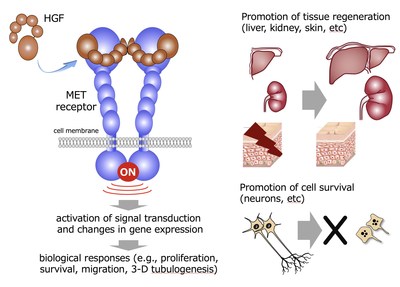 Growth factors are ligands that play important roles in the body - they are responsible for tissue regeneration, wound healing, and the maintenance and growth of cells. Stimulating growth factor-dependent pathways is therefore an important therapeutic strategy to promote the regeneration of tissues due to injuries and diseases. Using synthetic substitutes of growth factors is the primary method for artificially stimulating the desired pathways. However, synthetic substitutes are often not as efficient and comprehensive in inducing the required biological changes. Kunio Matsumoto at Kanazawa University and colleagues have recently created a substitute for one such growth factor, that produces a comparable biological response.

The hepatocyte growth factor (HGF) binds to and activates a receptor, known as MET (Fig. 1). In other words, HGF is a native ligand for the MET receptor. The MET receptor is a transmembrane protein. Upon extracellular binding of HGF to the extracellular region of MET, pairing of the receptors (called 'dimerization') occurs, which allows the intracellular chemical change of the receptors (called 'phosphorylation'). This receptor phosphorylation means receptor activation, which triggers activation of intracellular biological signal transduction pathways, leading to a variety of biological responses in cells.

To mimic the actions of HGF, the researchers created a 'macrocyclic peptide' molecule (named aMD5-PEG11) which activates the MET receptor (Main Fig). This molecule is composed of chemically cross-linked two macrocyclic peptides. Such cyclic molecules are flexible in structure and can bind and activate MET. Furthermore, aMD5-PEG11 docked onto to a different region of MET than HGF, aMD-PEG11 and HGF therefore did not directly compete for MET and nullify each other's effects. Whether aMD-PEG11 also induced these structural changes, was then assessed in two different human cell types. aMD-PEG11 induced the same extent of coupling/dimerization and phosphorylation of the MET receptor in a comparable ability to HGF.

The activation of a set of genes is responsible for specific biological functions. When the genes activated by aMD-PEG11 and HGF were respectively analyzed during 3-D tubulogenesis in human kidney cells induced by aMD5-PEG11 and HGF, changes in the gene expression profiles were largely overlapped and comparable between HGF and aMD5-PEG11. Because 3-D tubulogenesis by HGF in kidney cells implicates construction/development and re-construction/regeneration of a functional kidney, the comparable ability between HGF and aMD5-PEG11 to induce gene expression profiles suggests that aMD5-PEG11 can facilitate regeneration of the kidney in a potential comparable to HGF (Fig. 2).

Several growth factors have been used as biological drugs manufactured by recombinant protein production. This study reported a synthetic artificial ligand that induced chemical and biological effects equivalent to a natural ligand. Not only are artificial ligands relatively cheaper to produce, but often their smaller size leads to greater permeability in the body. "Artificial MET receptor agonists such as macrocyclic peptides have the potential to be developed as novel biological drugs manufactured by chemical synthesis," concludes the team. Besides growth factors, this strategy can be applied to many kinds of ligands.

Ligands and receptors: Ligands are molecules in the cell that specifically but reversibly bind to another molecule, known as its receptor. This binding of the two is the important first step in the activation of a series of pathways, responsible for a biological response. Ligands usually induce chemical/structural changes on the receptors subsequent to binding. Common examples of ligands are enzymes, neurotransmitters, hormones and growth factors.

Synthesizing drugs that mimic ligands and bind to specific receptors is a common strategy in medicine to stimulate the activation of biological pathways.

HGF activates MET receptor and activation of MET receptor triggers intracellular signaling leading to the enhancement of cell division, migration, survival, and 3-D tubulogenesis. These biological activities lead to the regeneration of tissues after injuries and diseases.

The University is located on the coast of the Sea of Japan in Kanazawa - a city rich in history and culture. The city of Kanazawa has a highly respected intellectual profile since the time of the fiefdom (1598-1867). Kanazawa University is divided into two main campuses: Kakuma and Takaramachi for its approximately 10,200 students including 600 from overseas.