KANAZAWA, Japan, Feb. 6, 2019 /PRNewswire/ -- A strategy to invert the chirality of a metal-containing helical molecule controlling the speed of the response is reported in Chemistry, A European Journal by researchers at Kanazawa University. 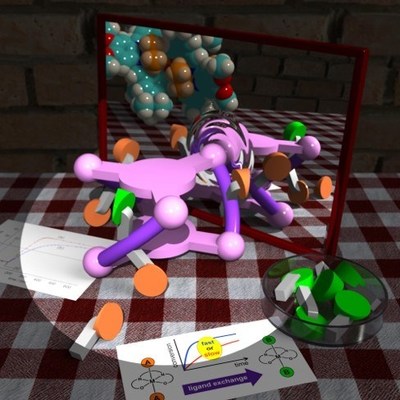 Chiral molecules cannot be superimposed on their mirror images – like hands. The two mirror images of a molecule, one right-handed, the other left-handed, are called enantiomers. Most molecules used in drugs are chiral, and only one enantiomer is effective (the other one can even be toxic), thus being able to control and manipulate the chirality of molecules is of foremost importance for a wide range of applications.

Some molecules can undergo a chirality change in response to external stimuli. In particular, dynamic helical molecules, which are in a dynamic equilibrium between the right- and left-handed forms, have been shown to switch chirality upon exposure to light, heat, redox reactions, changes in pH or binding with other molecules, for example by inserting organic molecules at the metal center of the helical complex. However, this last option is difficult to implement and very few successful instances have been reported so far.

Shigehisa Akine from Kanazawa University, in Japan, and colleagues now present a helical complex (a helical cobalt(III) metallocryptand) in which helicity changes can be triggered by introducing a variety of organic molecules in the helical structure. By replacing one ligand with a suitable other ligand, the helicity can be inverted, and the speed of the change can be controlled through the reactivity of the ligands, which is much simpler to do in practice than what is proposed in other protocols.

The molecule presented by the authors has a well-defined triple-helical structure, and six amine ligands that are coordinated to three octahedral cobalt(III) centers. Cobalt(III) ions normally form inert complexes and do not undergo ligand exchanges, but the cobalt(III) ions in this helical structure was found to undergo ligand exchange among amines. The authors demonstrated the dependence of the response speed on the combination of chiral and achiral amines as the starting and entering ligands, respectively, as a consequence of the difference in the reactivity of the Co-containing moieties. Several combinations of amines were tested, and different chiral amines were demonstrated to stabilize opposite helicities.

"We believe that these results will open the way for the development of new functional materials in which the response speeds can be controlled and the desired function is time-programmable using a suitable chemical stimulus," say the authors.

Many biological molecules are chiral: examples include DNA and sugars. Two molecules with opposite chirality, two enantiomers, have exactly the same composition and functional structure, but shapes that are mirror images of one another. They have the same physical and chemical properties in isolation, but not when they interact with other chiral molecules. For reasons that are not yet understood, all natural occurring amino acids have left chirality, thus human biochemistry is chirality-specific, so we react differently, for example, to the two enantiomers of a drug. Some chiral molecules are even perceived as having very different smells.

Amines are compounds that contain a nitrogen atom and a lone electron pair. Amino acids are a prominent example of molecules containing amines. Amines find applications in many different settings, including making rubbers, dyes and drugs. Some amines are known as good ligands for transition metals to give coordination compounds.

Nano Life Science Institute (NanoLSI), Kanazawa University is a research center established in 2017 as part of the World Premier International Research Center Initiative of the Ministry of Education, Culture, Sports, Science and Technology. The objective of this initiative is to form world-tier research centers. NanoLSI combines the foremost knowledge of bio-scanning probe microscopy to establish 'nano-endoscopic techniques' to directly image, analyze, and manipulate biomolecules for insights into mechanisms governing life phenomena such as diseases.

The University is located on the coast of the Sea of Japan in Kanazawa – a city rich in history and culture. The city of Kanazawa has a highly respected intellectual profile since the time of the fiefdom (1598-1867). Kanazawa University is divided into two main campuses: Kakuma and Takaramachi for its approximately 10,200 students including 600 from overseas.