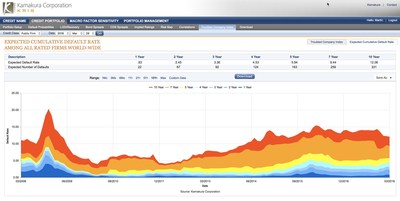 At 10.39%, the troubled company index is at the 57th percentile of historical credit quality as measured since 1990. Among the ten riskiest-rated firms listed in March, six are in the United States, with one each in Australia, Canada, Great Britain, and Switzerland.  Iconix Brand Group, continues as the riskiest global company, with a one-year Kamakura Default Probability (KDP) of 52.02%.  In March, there were 11 defaults in Kamakura's coverage universe.

The Kamakura expected 10-year cumulative default rate for all rated companies world-wide improved by 0.09% over the previous month to 12.06%.

"Following the financial crisis of 2007-08, the term 'new normal' was introduced into the business lexicon.  As a lender who's kept an eye on the markets for the past 30 years, I have to say this 'new normal' really reminds me of the 'old normal' of the credit cycle," said Martin Zorn, President and Chief Operating Officer for Kamakura Corporation.

"During an expansion cycle, access to leveraged capital normally leads to charge-offs that are recognized later, during a downturn in the business cycle.  While the IFRS-9 and CECL standards share the goal of reducing credit loss volatility through earlier recognition of expected losses, they both are dependent upon best practice modeling. The key to sound credit remains obtaining sufficient cash flow not only to survive, but to prosper. As interest rates rise, companies, need to generate enough cash to cover the increasing debt service. And as the pace of technological change accelerates, they also must invest in appropriate levels of research and development to remain relevant.

"The credit cycle is highly correlated to the business cycle, making reduced-form modeling the most practical framework for quantitative risk simulation and modeling.  As the troubled company index quickly approaches the median percentile, it should serve as a clarion call for firms to perform careful analysis of their credit portfolios.  The easy money has already been made. Lenders, bond managers and counterparty risk managers need to identify the counterparties in their portfolios that have the greatest credit and liquidity risks and seriously consider making changes."

About the Troubled Company Index

The Kamakura troubled company index measures the percentage of 39,000 public firms in 68 countries that have an annualized one- month default risk of over one percent. The average index value since January, 1990 is 14.50%. Since November, 2015, the Kamakura index has used the annualized one-month default probability produced by the KRIS version 6.0 Jarrow-Chava reduced form default probability model, a formula that bases default predictions on a sophisticated combination of financial ratios, stock price history, and macro-economic factors.

The KRIS version 6.0 models were developed using a data base of more than 2.2 million observations and more than 2,600 corporate failures.  A complete technical guide, including full model test results and parameters, is provided to subscribers. The KRIS service also includes a wide array of other default probability models that can be seamlessly loaded into Kamakura's state-of-the-art enterprise risk management software engine, the Kamakura Risk Manager. Available models include the non-public-firm default model, the commercial real estate model, the U.S. bank model, and the sovereign model.  Related data includes credit default swap trading volume by reference name, market implied credit spreads, and prices on all traded corporate bonds traded in the U.S. market.  Macro factor parameter subscriptions include Heath, Jarrow, and Morton term structure models for government securities in the U.S., Germany, the UK, Canada, Spain, Sweden, Australia, Japan, Thailand, and Singapore.  All parameters are derived in a no-arbitrage manner consistent with seminal papers by Heath, Jarrow, and Morton, as well as Amin and Jarrow.  A KRIS Macro Factor Scenario Service subscription includes both risk-neutral and "real world" empirical scenarios for interest rates and macro factors.

To follow the troubled company index and other risk commentary by Kamakura on a daily basis, please follow:

Founded in 1990, Honolulu-based Kamakura Corporation is a leading provider of risk management information, processing, and software. Kamakura was named to the World Finance 100 by the editor and readers of World Finance magazine in 2016 and 2012. In 2010, Kamakura was the only vendor to win two Credit Magazine innovation awards. Kamakura Risk Manager, first sold commercially in 1993 and now in version 10.0.3, is the first enterprise risk management system for users focused on credit risk, asset and liability management, market risk, stress testing, liquidity risk, counterparty credit risk, and capital allocation from a single software solution. The KRIS public firm default service was launched in 2002. The KRIS sovereign default service, the world's first, was launched in 2008, and the KRIS non-public firm default service was offered beginning in 2011. Kamakura added its U.S. Bank default probability service in 2014.