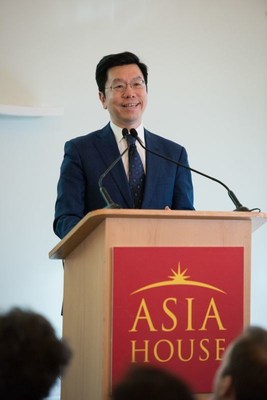 Dr Kai-Fu Lee, one of the world's premier thought-leaders on Artificial Intelligence (AI), has been named the winner of the 2018 Asia House Asian Business Leaders Award.

Dr Lee is Chairman and CEO of Sinovation Ventures - a leading Beijing-based technology investment firm focusing on developing the next generation of Chinese high-tech companies. It manages US$1.7 billion dual currency investment funds.

Dr Lee is a leading commentator on the social and political implications of AI and new technologies and how they will influence the future global economy. He has consistently advocated policies which seek to mitigate negative effects on employment as new technologies transform global businesses.

He has also called for the US and China to work together on AI rather than maintaining a course of rivalry and mistrust, a theme he explores in his new book: 'AI Superpowers: China, Silicon Valley and the New World Order.'

Dr Lee will be presented with the Asia House Asian Business Leaders Award in Singapore on 22 November at a gala dinner attended by senior figures from global business and diplomacy.

"Artificial Intelligence and new technologies are issues we monitor closely at Asia House, as we believe they will transform global businesses and have huge implications for billions of lives around the world.

"Asia House is recognising Dr Lee for championing innovation in this field, but also because of his positive contribution to the global conversation on new technologies. He has promoted the need for governments to understand the social and economic challenges AI will bring, and to create policies that ensure their populations are not left behind by the Fourth Industrial Revolution.

"It is for this impressive global leadership in one of the most important issues facing our time that we recognise Dr Lee with the most prestigious award Asia House can confer."

The Asia House Asian Business Leaders Award is presented annually by the Trustees of Asia House to recognise a figure who has made a positive impact on Asia and beyond through their business leadership.

"I am honoured to receive such a prestigious accolade and to be counted among the winners of the Asia House Asian Business Leaders Award.

"Artificial intelligence and big data are changing the world. I believe we have a duty to ensure that this change is one for the better, and that new technologies enrich, rather than impair, the lives of all people. I thank Asia House for recognising my efforts in this endeavour."

Kai-Fu Lee will receive his award at a gala dinner in Singapore on 22 November.

Asia House is the Centre of Expertise on Asia. Based in London, it drives economic and political engagement between Europe and Asia through its events programme featuring thought-leaders and decision makers; through its research activity; and through its corporate advisory services.

Dr. Lee is the author of seven top selling books in Chinese and launching new book AI Superpowers (http://www.aisuperpowers.com) internationally in fall 2018, and has over 50 million followers on social media.