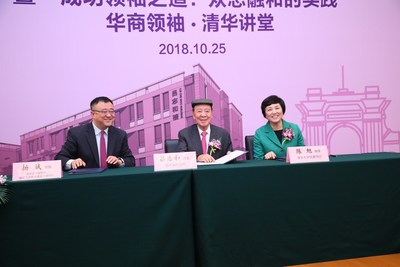 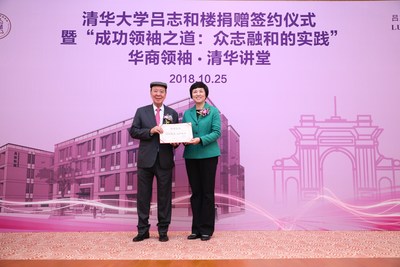 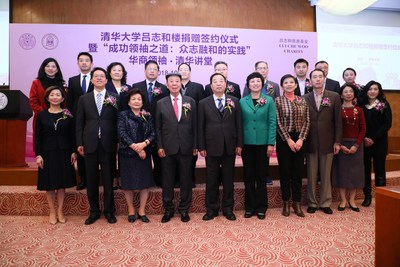 Dr Lui revealed the reasons for making this donation in his speech, "Tsinghua University's commitment to nurturing top-class talents with global vision, social consciousness and becoming a world-class university, as well as its motto of 'nurturing virtues and personal growth' are in perfect tandem with my own convictions in education, hence the decision to support the development of the Biomedical Sciences Building. Tsinghua University's School of Life Sciences, School of Medicine and School of Pharmaceutical Sciences are the top frontier research academic institutions in China, so I hope this donation will encourage academic research in and applications of innovative scientific technologies, thereby bolstering our nation's soft strengths."

Following the signing ceremony, Dr Lui joined a symposium with Professor Yang Bin, Vice President of Tsinghua University, hosted by Professor Long Denggao, Director of the Centre for Chinese Entrepreneur Studies. Dr Lui told the story of his business venture and shared the idea of inclusivity in diversity with faculty members and students. He shared the beliefs and insights behind the establishment of the international award, "LUI Che Woo Prize -- Prize for World Civilisation". He encouraged the students to pay more attention to current world issues and promote sustainable development with a global mindset. Dr Lui answered some of the questions raised by Tsinghua students and the symposium ended in the warm applause from the audience with student representative presented flowers to Dr Lui.

Dr Lui has always been a passionate benefactor for the development of biomedicine and education. In 2015, he founded the "LUI Che Woo Prize -- Prize for World Civilisation" in Hong Kong as an annual, first of its kind international cross-sector innovative award for advancing world civilization and inspiring people to build a more harmonious world. It aims to recognize and honour individuals or organization all over the world for outstanding contributions and encourages the continuation of that work in promoting sustainable development of the world, betterment of the welfare of mankind and positive life attitude and positive energy. Mr Xie Zhenhua, Tsinghua University alumni and Vice Chairman of the Committee of Population, Resources and Environment of the Chinese People's Political Consultative Conference who was awarded the "Sustainability Prize" in the "LUI Che Woo Prize -- Prize for World Civilisation" in 2017, donated full amount of the cash award to Tsinghua University to set up the "Global Climate Governance and Green Development Fund", supporting international cooperation in low-carbon development and climate governance, develop related projects and provide scholarships, in a full effort to drive initiatives in the prevention of climate changes and general climate governance.

K. Wah Group was founded in 1955 by Dr Lui Che-woo, who transformed the company into a multinational corporation. Core businesses include property development and investment, entertainment and leisure resorts, hospitality and construction materials. The Group has a business presence in Mainland China, Hong Kong, Macau, Southeast Asia and major cities in the US. The Group includes two Hong Kong-listed flagships: K. Wah International Holdings Limited ("KWIH"; HK stock code: 00173) and Galaxy Entertainment Group Limited ("GEG"; HK stock code: 00027 and a member of the Hang Seng Index). Other major subsidiaries include Stanford Hotels International and K. Wah Construction Materials Limited and, in the US, Stanford Hotels Corporation and Cresleigh Homes. To date, the Group has over 200 subsidiaries and close to 30,000 staff worldwide.