HONG KONG, Sept. 21, 2019 /PRNewswire/ -- The winners and finalists of the JNA Jewellery Design Competition 2018/19 were recognised in a prize presentation ceremony on 18 September 2019 during the Fair Reception of the September Hong Kong Jewellery & Gem Fair 2019. 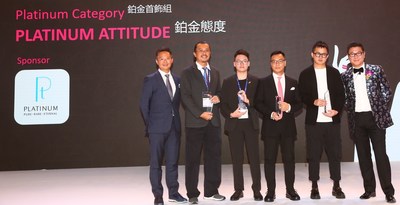 Organised by JNA of Informa Markets, the competition celebrates creativity, innovation and excellence in jewellery design. One Champion and four Merit recipients were announced for each of the 2018/19 edition's three categories in June. Renowned jewellery designer Fei Liu, who chaired the judging panel, led the proceedings at the prize presentation ceremony.

"The Heptagram is a seven-point star drawn with seven straight strokes. It is a symbol of perfection, light, eternity, perpetuity and victory as well as the seven notes of music, the seven colours of the rainbow, the seven alchemical metals and the seven days of the week. Seven is a lucky and mystical number traditionally associated with Venus. The mysterious Heptagram combined with Japanese cutting-edge technology and traditional craftsmanship is a perfect representation of 'New Fashion Tech,'" says Ochiai. Crossfor Co Ltd CEO Hidetaka Dobashi presented the Champion trophy to Ochiai's representative, Nobuyuki Horiuchi.

The Merit recipients in the Dancing Stone category are Sanat Karmakar from Egypt, Ming Cheng Hsiao from Taiwan, Allison Ice from the USA and Wang Zi Ting from Mainland China.

The Platinum category, sponsored by Platinum Guild International (PGI), had participants produce entries reflecting the theme, "Platinum Attitude." Liang Fan of China emerged as Champion for his remarkable piece, Star Lingers. "Only when the sky gets darker can the brilliance of stars be seen and appreciated. Using a simple modern style with layers, my design alludes to this beautiful starry concept to evoke a sense of peace and romance," he explains.

Alessio Boschi from Italy was declared Champion for his exceptional "The Leonidas Man" set, an intricately adorned men's necklace inspired by Spartan warrior-king Leonidas. Boschi says, "The design is bold, daring and masculine yet full of intricate details. The real protagonists are the Tahitian pearls with their different shapes and mesmerising shades from dark silver to peacock nuances."