A group of shining stars from China and Southeast Asian countries appeared on the red carpet and celebrated the launch in Singapore, a milestone in Influence Chain's development. 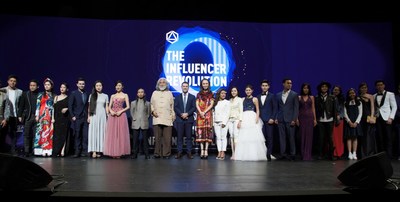 In the opening speech, the co-founder of Influence Chain, Heng Xia, introduced the initial thoughts and promising future of the project. "I have strong beliefs that the next generation of the fan economy will create a new way of interactions between influencers and supporters, because it is value-based. They can share their common interests, through our platform."

Owen recalled his experience from an insider's perspective, "After my retirement, I still benefit from the influence all these kind people gave to me, which inspires me to continue and spread this influence to more people. Influence has its value, and with more people involved, the value gets larger. When I first learned about Influence Chain, I was surprised by how much its vision coincides with mine. They are devoted to bringing the enormous value of global influencers to the world, to create a platform for global fans to have better and closer interaction, and to maximize the value of influence."

Mr Zhangji Zhong and Ms Siti Kamaluddin, shared their insights on this new combination of Blockchain Technology and celebrity economy in the following roundtable discussion, "Fans or followers will have influence on the process of film productions, in terms of fund-raising, audition and creativity."

Founded by a group of elites, Influence Chain creates a token based ecosystem that exploits the advantages of private blockchain by building up a token exchange, where influential power (individualized intellectual property) can be monetized into digital assets. Another key concept and core component in the ecosystem, Influence Index, is the analytical summary made available to the public, to track the performance of individual influencers listed on Influence Exchange. The unique supporters of each influencer will be able to evaluate their influential powers and make trading decisions. Thus, Influence Chain aspires to create value flows and uses cases between influencers and supporters.

Influence Chain has launched its branches in Seoul, Bangkok, Dubai in 2017.

The first launch in 2018, is showing the importance of Singapore as the center of Asia-pacific and Southeast Asia regions, in terms of influence economy.

Sparkle with Blockchain Technology, turn influence power into real value. Influence is reshaping the world and welcome to the Fan Economy 4.0.