·  Kurt Evans – Chef, artist-activist and social entrepreneur in Philadelphia, US, using his culinary skills to rally the community around ending mass incarceration

·  Viviana Varese – Chef of Viva restaurant in Milan, Italy, breaking down barriers around LGBTQ+ and inclusivity

LONDON, July 6, 2021 /PRNewswire/ -- 50 Best unveils three winners of a brand new initiative called Champions of Change, highlighting unsung heroes of the hospitality sector, who were able to create positive change out of the extraordinary events of the last 18 months. Presented in partnership with S.Pellegrino, Champions of Change recognises and celebrates individuals who have used this period as a springboard to drive meaningful action in their respective communities.

Champions of Change, part of the forthcoming The World's 50 Best Restaurants 2021 programme, sponsored by S.Pellegrino & Acqua Panna, forms a key pillar in the organisation's evolving '50 Best for Recovery' initiative. This year brings opportunities for positive change as the sector rebuilds and remodels itself with a greater focus on inclusivity and long-term sustainability, which is reflected in the winners' powerful work. A substantial donation will be made to each of the winners' causes from the 50 Best for Recovery Fund, allowing the recipients to continue building their initiatives and supporting long-term progress in the restaurant and food sphere.

The first of this year's winners is Kurt Evans – co-founder of Down North Pizza, a 'mission-led for-profit restaurant' in Philadelphia, US, which exclusively employs formerly incarcerated individuals while providing culinary career opportunities with a fair wage. In addition to slinging Detroit-style pizzas, Down North aims to mitigate recidivism and end mass incarceration in the long-term. Evans is the chef and activist behind the successful 'End Mass Incarceration' dinner series, where families impacted by mass incarceration come together with lawmakers and diners to engage in conversation about prison reform over a multi-course meal.

He is also the co-founder of Everybody Eats Philly, a collaborative team of Black chefs leading the fight against food insecurity in the city – an initiative born out of the pandemic. Evans will use the Champions of Change donation to help fund his End Mass Incarceration dinner series as well as to further the work that Everybody Eats Philly is carrying out to provide free meals and essentials to those in need.

Viviana Varese, who received a Michelin star for her Milan-based restaurant Viva, becoming one of very few women in Italy to do so, has also been selected as a Champion of Change. An LGBTQ+ and inclusivity campaigner, following her own personal experiences of discrimination, Varese is also part of the non-profit association Parabere Forum, aiming to empower women in hospitality. As a result of the pandemic, Viviana reopened Viva in spring 2021, as well as new restaurant W Villadorata in Sicily, with a strong focus on staff inclusivity regardless of gender, race, age or sexuality. In addition to employing and training farmers over the age of 60 who have lost their jobs, she collaborates with suppliers who employ people with disabilities to make her plates and pottery.

In autumn 2021, Varese intends to open a new gelateria ice cream shop in Milan and is specifically recruiting and training women who have been victims of domestic violence to staff the operation. Varese will use the Champions of Change donation to support this new retail project, which will provide much-needed employment opportunities to vulnerable women.

When the pandemic hit Thailand, Deepanker Khosla, an Indian chef based in Bangkok, turned his restaurant Haoma – which is staffed largely by migrants – into a soup kitchen for out-of-work Bangkok residents. He raised funds to make meals with his campaign, No One Hungry, where his staff prepped free meals for the homeless, and were able to receive food for themselves and their families as well. Khosla employs people from Myanmar and Nepal who often lack citizenship and he was able to retain all of his staff successfully despite the impact of the pandemic.

Haoma also received a three-star certification by sustainability organisation Food Made Good and is on its way to become zero waste by 2022. Khosla will use the Champions of Change donation to create and staff a full-fledged kitchen for the No One Hungry project, providing meals to thousands of people in need.

William Drew, Director of Content for The World's 50 Best Restaurants, says: "We are thrilled to recognise Kurt, Viviana and Deepanker with the first Champions of Change awards. Their passion and fortitude in creating positive change in the hospitality sector is humbling and we can't wait to see how they will use these donations to further their outstanding projects. We are honoured to salute the work they are doing and the example they are providing to the food world and beyond."

Stefano Bolognese, Sanpellegrino International Business Unit Director, says: "Talent and human capital are the authentic heritage of every restaurant – assets that are at high risk of dispersion when uncertainty prevails, and that therefore need to be encouraged and promoted. For this reason, we are proud to support the new Champions of Change initiative: the awards allow us to celebrate the local heroes who, with their skills and creativity, are positively contributing to the evolution of the gastronomy industry, offering a further opportunity of reflection on its strategic role within society."

In 2020, 50 Best pivoted from publishing its annual ranking and hosting live events to focus on fund-raising and supporting the hospitality sector through its 50 Best for Recovery programme, which included raising $1.29m with the support of its partners, including S.Pellegrino and Acqua Panna. 50 Best for Recovery distributed grants to more than 200 restaurants and bars and donated to a series of non-profits organisations in the food and drink sector. Champions of Change is one of several special awards which will be announced between now and September, as part of the lead up to the event programme for The World's 50 Best Restaurants 2021. These individuals have utilised recent challenges as a catalyst for positive action and long-term progress, whether they are helping others, improving the gastronomic sector or creating a healthier planet.

The World's 50 Best Restaurants 2021 awards, sponsored by S.Pellegrino & Acqua Panna, will be hosted in the city of Antwerp in Flanders – the Flemish-speaking northern region of Belgium – on Tuesday, 5th October. Returning after a year's hiatus, an extensive event programme in Flanders will culminate in the Antwerp awards ceremony, representing a key milestone in the ongoing revival of the restaurant sector.

About the host destination: FlandersFlanders is a small region where everything from delicious food to wonderful music takes craftsmanship to new levels. Artistic cities such as Antwerp, Bruges, Brussels, Ghent, Leuven and Mechelen are home to culinary delights, delicious chocolate and an endless variety of local and artisanal beers. You'll ﬁnd cutting-edge design and fashion that's ahead of its time side by side with architecture that's up to a thousand years old. Its Flemish Masters were experts in their craft, such as Jan van Eyck, who revolutionised oil painting techniques. Prepare for an experience: Flanders wants to share its secrets, its delights and its magniﬁcence with all. www.visitflanders.com Contact: Anita Rampall, anita.rampall@visitflanders.com ; +44 (0)20 7299 3594

About the host city: AntwerpAntwerp has a rich culinary tradition, where food and drink are elevated to true art forms. Its natives love to eat and drink in the vast array of restaurants, cafés and bars that the city houses. The multi-cultural cuisines that for centuries have found their way to Antwerp thanks to the city's port and its immigrants combined with local specialities have created a gastronomy with a fascinating and varied palate of flavours. And while Antwerp might be famed as the world diamond capital, as an icon for fashion and as an international port city, it can certainly hold its own against other cities when it comes to gastronomy. www.visitantwerp.beContact: Dirk Vermeiren, dirk.vermeiren@antwerpen.be, + 32 (0)3 338 84 81; +32 (0)477 234 764 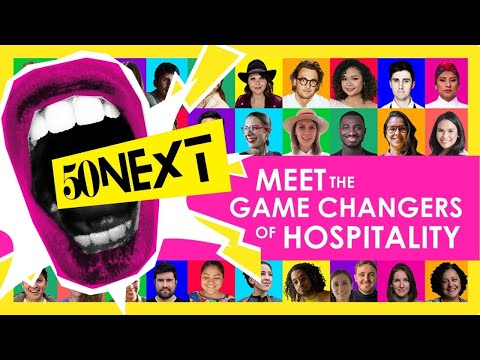 50 Best Unveils 50 Next, A Global List Of Young People Shaping...

50 Best Unveils 50 Next, a Global List of Young People Shaping...