A week to discover the goodness of the "liquid gold" 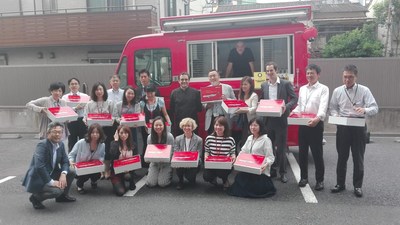 The best of Spanish cuisine, with Olive Oil at the head, will be in the main travel agencies of Tokyo. A 'food truck' will bring the icons of Spanish culinary culture to the Japanese so they can try the best of 'Spanish Lifestyle' both the gastronomic and the aesthetic uses of this millenary juice.

The staff of the travel agencies of Tokyo, the most populated city in the world, will have the opportunity to live a true organoleptic experience with the arrival of the exquisite Olive Oils to the thousand-year-old capital of Japan. Iberia and Olive Oils from Spain continue to join efforts to increase the knowledge of Spain as a world leader in quality and production. From May 28 to June 1, the capital of the rising sun will be witness of how their main travel companies are filled with the most appreciated of Spanish cuisine, during lunch time.

This action will be carried out by 'food truck' that will bring the unmistakable taste of Olive Oil to the most recognized Tokyo agencies. When the 'Iberia Food Truck' arrives at the companies, an exquisite 'lunch box' composed of Spanish culinary classics such as Iberian ham, Manchego cheese, Spanish omelet, seafood paella, red wine and, of course, the liquid gold: Olive Oil, will be distributed.

In addition, an informative flyer with gastronomic and aesthetic uses of Olive Oil will be included. An attractive set of four bottles of the Arbequina, Cornicabra, Hojiblanca and Picual varieties will also be available to the Japanese to open a window to the heart of the Mediterranean Diet, a universe where this delicacy leaves no one indifferent, just like the surprising Asian metropolis.

Olive Oil from Spain is the promotional brand of the Interprofessional of Spanish Olive Oil, which has been developing promotional campaigns for almost a decade to bring this super food to consumers on five continents. Among its priorities is the United States market, where Olive Oils from Spain are leaders, with exports in 2017 of 124,000 tons.