HAIKOU, China, March 30, 2018 /PRNewswire/ -- Today HNA Group, a global Fortune 500 company focused on aviation, tourism, logistics and financial services, announced the opening of  "Five Plus Five: Sculptures From China and Great Britain in Hainan", a seminal art exhibition held in Haikou, the capital of the tropical island province of Hainan in Southern China, the site of the company's founding and base of its operations for the last 25 years. 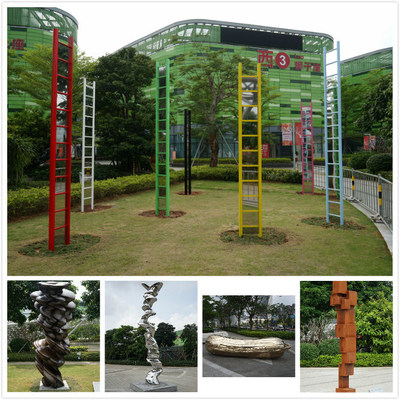 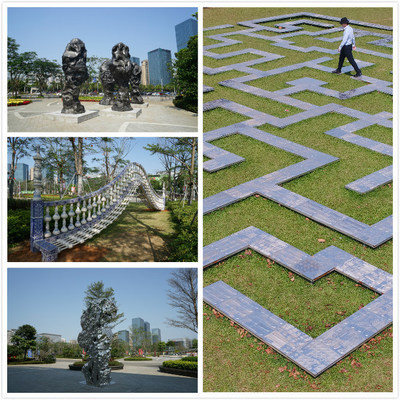 The artworks will be displayed for six months at two locations, in Haikou's Evergreen Park and Mova Square. The vision for the exhibition is to bring the art of sculpture directly to the people of Haikou. This encounter with contemporary and international art within a public space will be a first for many in Hainan and HNA Group's support of the project reflects its long held commitment to giving back to the local community and furthering cultural dialogue between China and the West.

The British artists included in the exhibition represent the UK's important role in the history of sculpture. Pieces by Tony Cragg and by Anthony Gormley remember the period of 'New British Sculpture' beginning in the 1970s, which started a tradition of British sculpture breaking with the orthodoxies of conceptual art. Furthermore, the featuring of Sarah Lucas' sculptures reflects the influence of the 'Young British Artist' movement, while Jim Lambie of the Glasgow School of Art's spectacular sculpture 'Shaved Ice', composed of ladders filled with mirrors installed prominently on Mova Square shows clearly that British creativity is far from confined to London.

The Chinese artists are drawn from the country's burgeoning contemporary art scene. They use a modern style rooted in Chinese traditional elements such as Scholar's Rocks and bridges that feature in Chinese landscape painting.

HNA has a tenured commitment to supporting the arts. Examples of HNA's commitment to art include its management of the 300 year old Zhengyici Peking Opera Theatre, its long partnership with the National Centre for Performing Arts in Beijing and the organisation of multiple other art exhibitions worldwide.

HNA Group is a global Fortune 500 company focused on aviation, tourism, logistics and financial services with significant operations globally. Since its founding in 1993, HNA Group has evolved from a regional airline based on Hainan Island in southern China into a global company with over $230 billion of assets and over $100 billion in annual revenues based on 2017 figures, primarily across America, Europe and Asia. HNA's tourism business is a fast-growing, vertically-integrated global player with market-leading positions in aviation, hotels and travel services. HNA's logistics business is a leader in logistics and supply chain management with capabilities in shipping and equipment manufacturing, maritime transportation, third-party payment platforms and project finance. In financial services, HNA is China's largest non-bank leasing company, and a leading provider of a diverse set of businesses in equipment leasing, insurance, asset management, investment banking and credit services. For more information, visit www.hnagroup.com