Hisense is proud to have awarded Sergio Busquets of Spain with the Hisense Player of the Finals trophy.

QINGDAO, China, Oct. 12, 2021 /PRNewswire/ -- The Spain captain dominated the midfield battle in his side's semi-final victory against Italy, shielding the defense and spreading passes around – prompting Italian newspaper La Gazzetta dello Sport to hail him as a "maestro." He was similarly important in Sunday's final versus France, setting up Mikel Oyarzabal's opening goal before Les Bleus fought back to clinch the trophy. 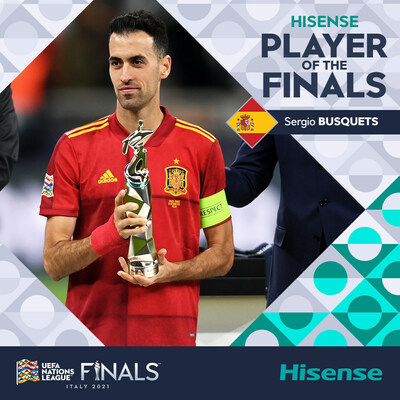 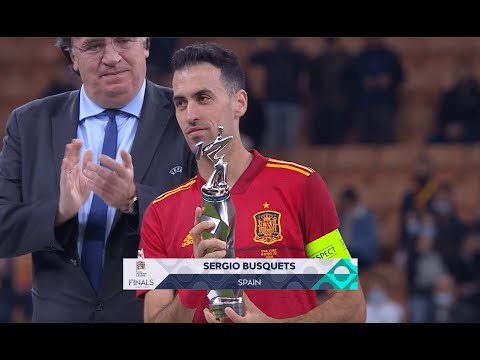 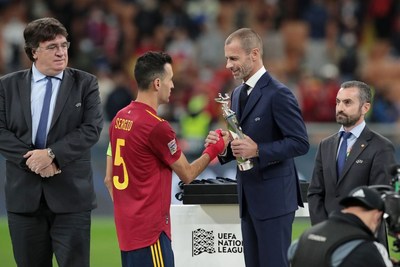 Hisense has supplied and presented the Player of the Finals trophy to Busquets in collaboration with UEFA. Having been designed and produced in the R&D and production facilities in Qingdao, the home of Hisense, the trophy adopts the Chinese character "信," meaning "trust." The "信" character also features within Hisense's name.

Based on the design concept of Trust, the trophy captures the notion that trust forms the basis of the communication between players and teams and functions as the bridge between individuals, organizations, and nations.

Trust is fundamental to the art of football, which is in line with UEFA's vision put forward by President Aleksander Čeferin, who indicated that "the strategy is based on four main pillars: football; trust; competitiveness and prosperity." Using calligraphy as a design technique, the designer has depicted a football player and uses brushwork to express the strength and speed of the ball movement.

Since 1969, Hisense has been developing leading consumer technology, home appliances, and multimedia products while always keeping the core principles of "Integrity, Innovation, Customer Focus and Sustainability" in mind. To live these values, Hisense uses state-of-the-art R&D and production facilities around the world with the aim of developing high-quality products to global consumers.

Hisense has a strong involvement in European football and is proud to continue to share its values with UEFA while also using world-leading football events as a platform for growth in Europe for its core product offering.

FIFA and Hisense jointly release announcement: Hisense to be the...