AMSTERDAM, Jan. 15, 2020 /PRNewswire/ -- Heineken® has launched its latest James Bond TV commercial featuring Daniel Craig. The launch comes ahead of the April release of the 25th James Bond film, No Time To Die. Heineken® has been the proud partner of the Bond franchise for the last eight films.

The TV commercial, which will be shown in over 75 countries, gives a fresh perspective on Daniel Craig's iconic portrayal of James Bond. Focussing on the premise that Daniel Craig will always be James Bond in the eyes of fans around the world. Watch the new commercial here. 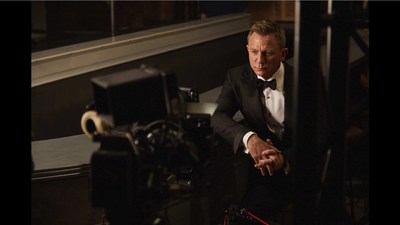 Starting with a high-speed taxi sequence, Daniel Craig is constantly recognised as James Bond by surprised locals as he hunts down his missing passport, before enjoying a cold refreshing Heineken®. The new commercial launches worldwide today.

Gianluca Di Tondo, Senior Director, Global Heineken® Brand said; "Heineken® has enjoyed a long-standing relationship with the James Bond franchise for over two decades, covering the last eight films. Ahead of the release of No Time To Die, we wanted to bring a twist to the iconic character and show how Bond lives beyond the film – as we believe, once James Bond, always James Bond. In addition, as we do with our other partnerships such as UEFA Champions League and Formula One, we have developed a dedicated Heineken® 0.0% element to the campaign. This part of the campaign, as well as outlining the consumer choice available in our portfolio, has already created significant media debate." Watch the Heineken® 0.0% content here.

No Time To Die, is the twenty-fifth James Bond film from EON Productions and will be released globally from April 2, 2020 in the U.K. through Universal Pictures International and in the U.S on April 10, from Metro Goldwyn Mayer Studios via their United Artists Releasing banner.

In addition to the commercial, which can be viewed on TV, online and across social media, Heineken® is also activating consumer promotions as well as limited edition packaging.

HEINEKEN is the world's most international brewer. It is the leading developer and marketer of premium beer and cider brands. Led by the Heineken® brand, the Group has a portfolio of more than 300 international, regional, local and specialty beers and ciders. We are committed to innovation, long-term brand investment, disciplined sales execution and focused cost management. Through "Brewing a Better World", sustainability is embedded in the business.

HEINEKEN has a well-balanced geographic footprint with leadership positions in both developed and developing markets. We employ over 85,000 employees and operate breweries, malteries, cider plants and other production facilities in more than 70 countries. Heineken N.V. and Heineken Holding N.V. shares trade on the Euronext in Amsterdam. Prices for the ordinary shares may be accessed on Bloomberg under the symbols HEIA NA and HEIO NA and on Reuters under HEIN.AS and HEIO.AS. HEINEKEN has two sponsored level 1 American Depositary Receipt (ADR) programmes: Heineken N.V. (OTCQX: HEINY) and Heineken Holding N.V. (OTCQX: HKHHY).

EON Productions Limited and Danjaq LLC are wholly owned and controlled by the Broccoli/Wilson family. Danjaq is the US based company that co-owns, with Metro Goldwyn Mayer Studios, the copyright in the existing James Bond films and controls the right to produce future James Bond films. EON Productions, an affiliate of Danjaq, is the UK based production company that has made the James Bond films since 1962 and together with Danjaq controls all worldwide merchandising. The twenty-fifth 007 film, No Time To Die, is currently in post-production. For more information visit 007.com.

Metro Goldwyn Mayer (MGM) is a leading entertainment company focused on the production and global distribution of film and television content across all platforms. The company owns one of the world's deepest libraries of premium film and television content as well as the premium pay television network EPIX, which is available throughout the U.S. via cable, satellite, telco and digital distributors.  In addition, MGM has investments in numerous other television channels, digital platforms and interactive ventures and is producing premium short-form content for distribution. For more information, visit www.mgm.com.