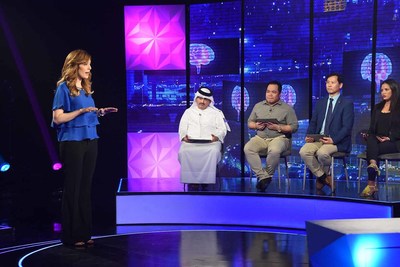 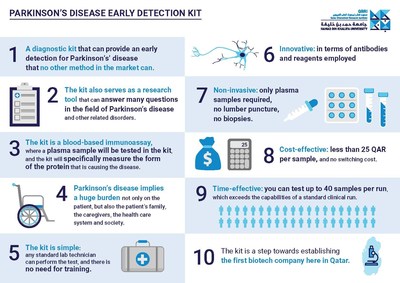 Delighting a global audience throughout its tenth season, Qatar Foundation's (QF) Stars of Science decided its four grand finalists on Saturday, November 17, giving way for the jury and live audiences to vote for their favorite innovator with an equal 50/50 voting power. Nour Majbour, a research associate from Hamad Bin Khalifa University's (HBKU) Qatar Biomedical Research Institute (QBRI), is competing as a Qatar-based finalist and is displaying her innovative strides in early Parkinson's disease (PD) diagnostics, which carry great entrepreneurial promise for the biotech industry in Qatar.

A powerful champion for women in Science, Technology, Engineering and Mathematics (STEM) worldwide, Majbour gained prominence with her innovative Parkinson's Early Detection Kit, which leverages naturally-occurring antibodies within the human immune system to identify biological signs of the onset of Parkinson's disease (PD). The kit utilizes antibodies that capture the form of protein that causes PD. PD is a neurodegenerative condition that affects about 10 million people worldwide, making it the second most common age-related neurodegenerative disorder after Alzheimer's disease.

A strategizer since early childhood, Majbour said: "Many years of chess games with my older brother have honed my patience and competitive spirit; and both became invaluable assets throughout my journey at Stars of Science. Taking my research from QBRI's laboratories to a global television audience meant that I had to adapt to a new level of visibility; however, I am honored that the jury recognized the value of my prototype and supported my ascent to the finale."

Respectively, Majbour plans to use her share to develop her kit for an up-and-coming Qatari biotech company that will seek to innovate new scientific tools to facilitate early diagnosis, treatment, and management of devastating diseases.

The show forms a microcosm of real-market conditions where an innovation is tested against certain parameters including prototype performance, industrial design and customer validation. Ultimately, her product's successful performance in each of these categories underpins the future marketability of her Parkinson's Early Detection Kit.

In the process, HBKU's support proved instrumental in the development of an impactful and viable prototype that carries the potential to mature into a fully-integrated diagnostics solution and overhaul patient care for generations to come. This season's competition further underlines Majbour's cutting-edge contribution to medical science whose relevance is projected to increase as the incidence of PD rises proportionally to globally improved life expectancy figures.

As an HBKU innovator, Nour continues to embody the University's values of creativity and excellence, whilst doubling as a role model for female independence and leadership in STEM professions. Throughout her appearances on the show, she successfully manages to overcome technical challenges and showcase great perseverance, which led to her placement within the finale. Additionally, Nour's project is more than a theoretical concept, but rather a substantiated innovation with enterprise potential that can expand the healthcare industry's current methods of disease identification.

The University's standing cooperation with Stars of Science serves a common pursuit towards providing Qatar and the wider Arab region with access to knowledge and scientific innovation. Accordingly, Majbour's biomedical research in the field of PD illuminates a new path for early disease diagnostics, whilst safeguarding Qatar's position as a regional hub for healthcare innovation.

Online voting for the Stars of Science Grand Final is now open on http://www.starsofscience.com and ends on Thursday, November 22, at 9am GMT.

Hamad Bin Khalifa University (HBKU), a member of Qatar Foundation for Education, Science, and Community Development (QF), was founded in 2010 as a research-intensive university that acts as a catalyst for transformative change in Qatar and the region while having global impact. Located in Education City, HBKU is committed to building and cultivating human capacity through an enriching academic experience, innovative ecosystem, and unique partnerships. HBKU delivers multidisciplinary undergraduate and graduate programs through its colleges, and provides opportunities for research and scholarship through its institutes and centers. For more information about HBKU, visit http://www.hbku.edu.qa.